New research shows that there were 16 billion payment cards in circulation at the end of 2018, up by 10% since a year earlier. The research indicates that financial inclusion initiatives are driving growth in the payment cards market, as governments, particularly in developing countries, encourage people to enter the banking system. 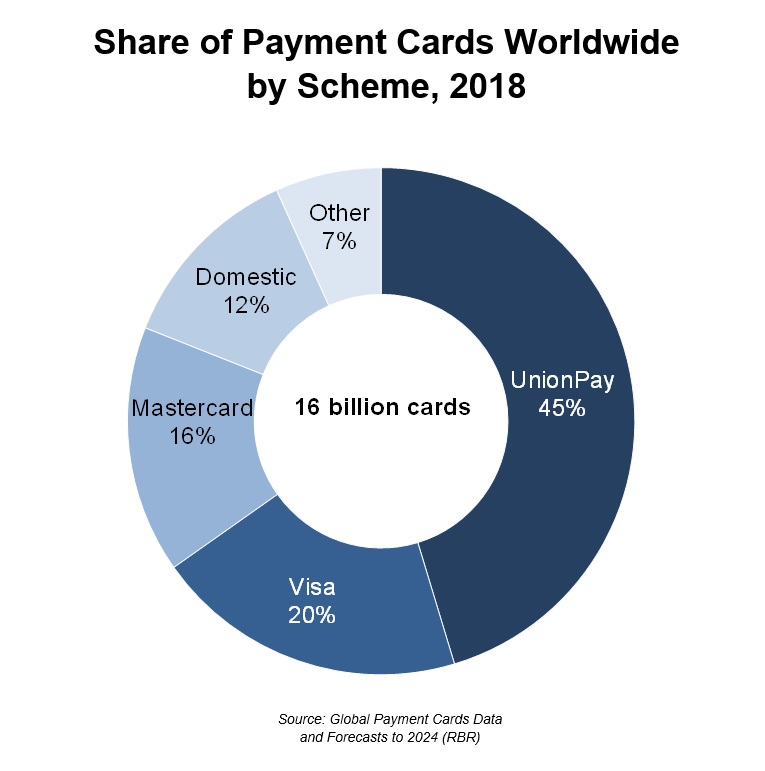 UnionPay accounts for 45% of all payment cards

The largest scheme worldwide is UnionPay, which accounted for 45% of cards in circulation at the end of 2018, up one percentage point on the previous year. RBR’s Global Payment Cards Data and Forecasts to 2024 shows that the scheme’s large share, and its growth in the last year, are both heavily reliant on its home market of China.

Customers in China are typically issued a UnionPay card by default (although they can apply for a card of another scheme if they wish), and the huge size of the population and consistently strong growth in issuing means UnionPay’s share continues to grow. However, if China is excluded, UnionPay accounts for only 1% of the world’s cards.

According to the report, Visa (including Visa, Visa Electron, V PAY and Interlink) made up 20% of the world’s cards at the end of 2018. The Visa brand is becoming more common, particularly at the expense of Visa Electron, as the former is more widely accepted, and issuers are keen to increase usage by giving their cardholders more opportunities to make purchases.

Mastercard (Mastercard, Maestro and Mastercard Electronic) accounts for 16% of all cards and the trend towards greater issuance of the main brand is similar to that of Visa.

The report shows some contradictory trends in domestic scheme cards. Such cards are issued in a large number of countries and are often backed by governments as a way of increasing financial inclusion and card usage in developing markets. Despite strong performances from newer domestic schemes such as RuPay in India and Mir in Russia, domestic schemes’ share of global cards fell from 13% in 2017 to 12% in 2018. This was mainly because a large number of unused debit cards were cancelled in Iran, where all cards are domestic.

Looking ahead, RuPay in particular is looking at continued strong growth as it has expanded its acceptance network to include Bhutan, Singapore and the UAE in 2019, which leads it to becoming an international brand in the same way UnionPay – which began as a Chinese domestic scheme. Daniel Dawson, who led RBR’s study said: “Although domestic schemes are breaking through and gaining share in some markets, the added functionality and wider acceptance of international schemes continues to give them an advantage”