In mid-September, the Bank of England issued a new polymer £10 note featuring the author Jane Austen. The notes include raised dots in the upper corner to help blind and partially sighted people identify them. Security features include a hologram window to raise the bar against counterfeiters. 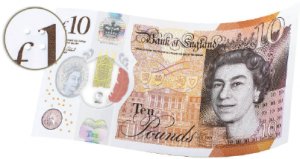 But with so many digital ways to pay, why issue new notes? UK consumers are enthusiastically using digital payments. Contactless payment tripled in 2016, accounting for seven percent of payments, according to Payments UK. The shift in consumer preferences is also evident in online spending, where average weekly shopping in the UK was £1.1 billion in August 2017; a year-on-year increase of 16 percent, the Office for National Statistics said.

However, speaking at a conference in Vienna at the beginning of October, Victoria Cleland, chief cashier at the Bank of England, claims that cash is not in decline. Bank of England notes in circulation increased by ten percent in 2016, reaching over £70 billion in the run-up to Christmas. This was the fastest growth
in a decade.

Cash reminds the most widely used payment method in the UK. It accounted for 40 percent of all payments and 44 percent of consumer payments in 2016, according to Payments UK. “As a central bank, as with most businesses, it is important for us to understand what motivates demand for our product and how this might change,” said Cleland.

The Bank has developed an econometric model that estimates the long-term relationship between the level of notes in circulation and the drivers of demand. When tested this has proved to be statistically significant. Such drivers include nominal consumption, interest and exchange rates. “We estimate that a one percent rise in consumption led to a slightly less than one percent in cash demand,” said Cleland.

A one percent depreciation in the sterling exchange rate was found to increase cash demand by 0.09 percent. The increase in demand for cash immediately following the results of the EU referendum was consistent with this finding.

Unsurprisingly, higher interest rates reduce the demand for cash as the opportunity cost of holding it rises. The Bank’s model suggests that an increase of 100 basis points in bank rate would reduce cash demand by two percent, which would impact the £20 and £50 notes most.