In order to identify issuers’ reactions to the interchange regulation decreases effective December 2015, First Annapolis has been closely monitoring the product offerings of the top 5 issuers in 13 European markets over the past two years.

As shown in Figure 1, several issuers in the UK, Poland, and the Czech Republic rationalized their product set, reducing the number of card products in their portfolio and focusing on simple customer propositions.  Three large UK issuers—Lloyds, RBS and Barclay’s—withdrew cards with no annual fees; one Czech issuer, CSOB, rebranded its card portfolio; and Polish issuers such as Bank Pekao and Bank Millennium scaled down their business card offerings considerably. 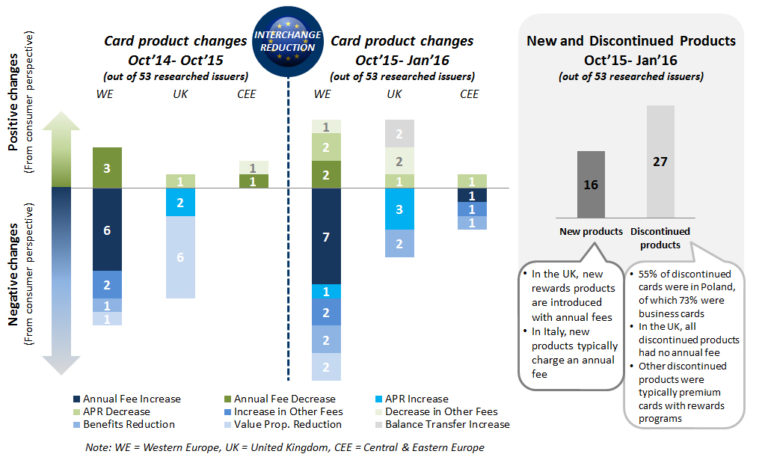 In the UK, where credit card interchange decreased by almost 50 bps (from approximately 0.77% for Visa and 0.80% for MasterCard down to 0.30%), many issuers have significantly reduced the value of rewards of their loyalty programs.  In some cases earn rates have fallen by 500%, while other issuers have removed rewards completely.

Large UK retailers such as Tesco and Sainsbury’s have slashed earn rates on their PLCC products by increasing the required spend to obtain a club card point. Capital One and Sygma Bank (LaSer UK) reduced and eliminated the cashback earned on certain credit card products. Overall in the UK, issuers who have decided to reduce the value proposition on their card products have done so by reducing their points-per-pound spend by 65% (see Figure 3).

This trend is also found in the Czech market, where interchange on credit decreased by 70-80 bps, from 1.0% for Visa and 1.1% for MasterCard to 0.30%.  Raffeisen reduced cashback from 2.0% to 1.0% and the cap on monthly rewards from 1,000 CZK to 250 CZK. In Spain, issuers such as Bankia scaled down advertising of some of their rewards programs such as card-linked discounts at petrol stations.  Co-brand programs, especially in the airline sector, in Italy, Spain, and Poland have seen reduced rewards value, as well as increased annual and cash withdrawal fees.  For example, Gruppo Intesa San Paolo decreased the miles earned per euro spent by 0.5 points on the AirItalia co-brand card.

Eleven banks in France, UK, Sweden, Poland, the Netherlands, and Belgium have increased the annual fees on their card products (as illustrated in Figure 2). In France, Credit Agricole Group, BPCE and BNP Paribas have raised fees on approximately six card products each, with average price increases of 14%, 7%, and 40%, respectively.  In Sweden, Handelsbanken raised the annual fees on four cards, with an average increase of 36%.  In the Netherlands, Rabobank increased fees on half of their card portfolio, and ING has initiated annual fees on two card products which were previously free of charge. Overall, the changes in annual fees in Western Europe, the UK and Central & Eastern Europe have increased an average of 33%, 50% and 28% respectively, as demonstrated in Figure 3. 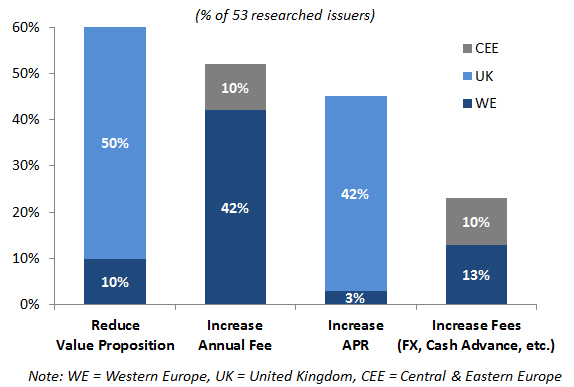 Several banks in the UK, including Lloyds, Barclays and Santander, raised the APRs on their credit card products, with an average increase of 154 bps.  The APRs on several credit card products issued by Swedbank and Handelsbanken in Sweden decreased, potentially due to reductions in Central Bank interest rates. Also, as Nordic banks initially have had low interchange levels due to local debit schemes, and generally being more debit than credit centered markets, issuers have not been pressured to substitute interchange revenue with higher fees or APRs.

In the short term, we expect issuers and co-brand partners to continue optimizing their rewards programs and focus rewards more narrowly on the most popular merchant categories, such as supermarkets, petrol, and travel.  We also expect issuers to focus more on “soft” non-financial benefits, merchant discount programs, and customer experience improvements on mobile and digital channels.

In the longer term, we expect issuers to: