The value of card payments in Asia-Pacific grew by 25% in 2014 to reach $9.0 trillion, accounting for just under half of the global total card expenditure.

The level of cardholding in Asia-Pacific is comparable to most other regions, but usage per card remains low. Cash continues to be used heavily and card acceptance is limited in some countries – Asia-Pacific’s density of outlets to population is far below the global average. The situation is changing, however, supported by official campaigns to encourage card payments and improve acceptance in several countries, for example in Malaysia and Thailand.

Between 2014 and 2020, RBR forecasts the value of payments with cards issued in Asia-Pacific to more than 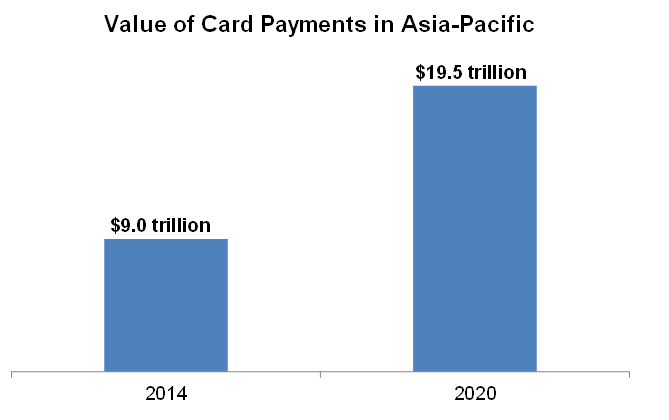 double, to $19.5 trillion, stimulated by almost three-fold growth in the number of merchant outlets, with the bulk of these in China. The growth in value will be uneven across the region because countries are at vastly different stages of maturity: Japan, South Korea and Taiwan have reached maturity in terms of card penetration but India, Indonesia and Pakistan are underdeveloped and still have substantial scope to grow. 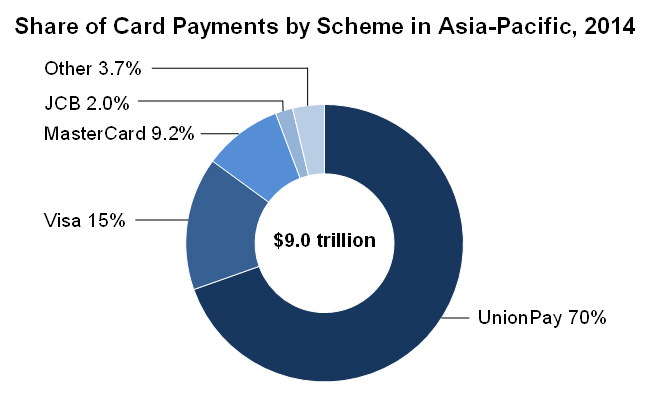 2014, reflecting the rapid expansion of the Chinese cards market. UnionPay cards are issued in nine further countries in the region, but less than 1% of scheme spending in the region originates from cards issued outside China. Visa and MasterCard account for 15% and 9% of the value of Asia-Pacific card payments. JCB makes up 2% overall, but has a 22% share in its home market of Japan.

Domestic schemes are issued in almost all countries in the region, but are generally used for cash withdrawals rather than payments and in most cases their share of payments is static or declining. RBR’s study shows that, at a regional level, they make up less than 2% of value. The fastest expanding domestic scheme is India’s RuPay, operated by the National Payments Corporation of India (NPCI). It has seen phenomenal growth since its inception in 2012, with issuers attracted by its lower processing fees and, by the end of 2014, RuPay’s share of India’s card expenditure had already reached 6%.

UnionPay will face greater competition in its home market

UnionPay is expected to maintain its position as the largest scheme in Asia-Pacific, in the short term at least. The scheme’s dependence on China makes it more vulnerable than its competitors to economic volatility and the end of its monopoly on bank card clearing in China has opened up the Chinese market to foreign players. Going forward, UnionPay will face increased competition, with all the international card schemes eager to exploit the potential that a more open Chinese card market presents.

The post Card payments in Asia-Pacific set to double to $19.5 trillion by 2020 appeared first on Payments Cards & Mobile.