Now several companies, including Google, Facebook, Twitter and Pinterest, are trying to bridge the gap between mobile browsing and desktop purchasing with a simple “buy” button.

Buy buttons have been around since the early days of the web, of course, notably with 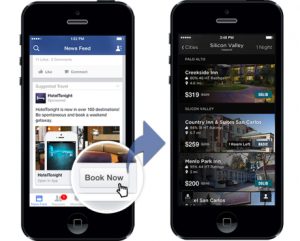 Amazon’s “One-Click Ordering,” where people set up a button that runs their credit card and ships whatever they have bought to a designated address.

But these new buy buttons allow technology companies to act as middlemen between mobile shoppers and retailers — extending one-click ordering to thousands of small retailers and eliminating exasperating typing on a phone’s touch screen.

This may seem like a minor inconvenience in a world where so much information is at our fingertips, but it is a big deal for tech companies whose multibillion-dollar advertising businesses are increasingly mobile yet remain highly tethered to the success of online shopping – according to an article in the NY Times.

Despite spending close to three hours of each day staring at their mobile phones, Americans continue to do the vast majority of their online shopping through desktop and laptop computers, which have larger screens and physical keyboards that are more amenable to browsing and typing in credit card numbers. Mobile phones are projected to account for about half the time Americans spend online this year, but only about one-fifth of retail e-commerce sales, according to eMarketer.

“We’ve seen that shopping behavior has shifted to mobile in a profound way, but there’s a gap between time spent and dollars spent,” said Andrew Lipsman, vice president for marketing and insights at comScore, a research firm in Reston, Va.

The logic for the companies working on the new buy buttons is that, in an increasingly mobile world, where people do less typing and more tapping, a more predictable checkout process will drive sales by reducing “friction,” which is a technology industry euphemism for any inconvenience, no matter how small, that might cause people to wonder why they are opening their wallets.

Mobile applications are the model for this, since they keep people logged in and their credit cards on file, creating a closed system where people can order a cab or groceries with a tap. That is fine if you have downloaded the app, but not so helpful if you are searching for deals on random websites.

In comScore surveys, shoppers complained of not being able to see the products on a small smartphone screen, or having difficulty clicking through shipment and payment options.

“When smartphones started emerging, people made versions of their websites with narrower margins but it was the exact same experience, and they didn’t perform that well,” said John Collison, co-founder of Stripe, a San Francisco mobile payments company that powers buttons for several companies including Pinterest.

Here’s how it works for Pinterest’s “buyable pins”: People enter their credit card numbers into the Pinterest app, along with shipping details. When they see something they want to buy, they click “Buy it,” at which point the retailer is told where to ship it and take payment using that credit card or the Apple Pay service.

Tech companies lose out when someone clicks on one of their ads but fails to use a credit card and “convert.” User clicks from retailers’ mobile ads become sales about 84 percent less often than clicks from ads on desktop search, according to adMarketplace, a company that sells search advertising outside of search engines.

This significantly lower conversion rate helps explain why mobile search ads cost about half as much as their desktop counterparts, according to Adam J. Epstein, president of adMarketplace.

Of course, it is not as if checkout pages are a delight to work with on desktops. But before mobile, when the shopping competition was buying online versus stores, the pain of dealing with a shoddy checkout page was dwarfed by the pain of getting in a car, going to the store, buying an item and driving back home.

“In mobile, it’s mobile versus desktop, and if you want to drive transactions, you have to make it simpler than a desktop,” Mr. Epstein said.

Few companies have more riding on mobile ads than Google, which became one of the world’s most valuable companies by building an advertising empire that began on desktop and laptop computers but is shifting rapidly to mobile devices.

For the last several years, Google has seen a decline in an important measure of ad prices called cost per click, or the average price the company is paid each time a user clicks on an ad.

“The experience you had on desktop was an e-commerce experience. You were researching, you were buying something or making a reservation, and that was a closed loop; we could track it,” said Jason Spero, Google’s vice president for performance media.

Mobile phones blur the line between online and in-store shopping, because people often use them while shopping in stores, or to search for phone numbers to make purchases.

But of course it would be easier for consumers, and probably would raise the price of ads, if advertisers could see a direct link between their ads and a purchase.

Google recently rolled out ad formats such as hotel ads that allow people to book directly inside the ad. Mr. Spero said a buy button will come later this year and at first will rest inside Google Product Ads, a popular ad format that includes product shots and information.

It is too early to say what this might do for retailers. If buy buttons take off, it would reduce the need for shoppers to visit their sites, which could make shoppers even less loyal to their particular stores.

And Serena Potter, group vice president for digital media strategy at Macy’s, which is working with Pinterest on “buyable pins,” said she did not care where her company’s sales came from.

“We just want them to shop, so wherever they choose to do that research and complete the transaction is fine with us,” she said.