Building on the Blockchain

Following the announcement by more than 20 of the world’s largest banks that they are collaborating to develop common standards for Blockchain technology, PCM examines the implications of a decentralised, distributed ledger for the banking and payments industry.

At first it was all about the Bitcoin: the peer-to-peer electronic cash system, which is all bit and no coin. 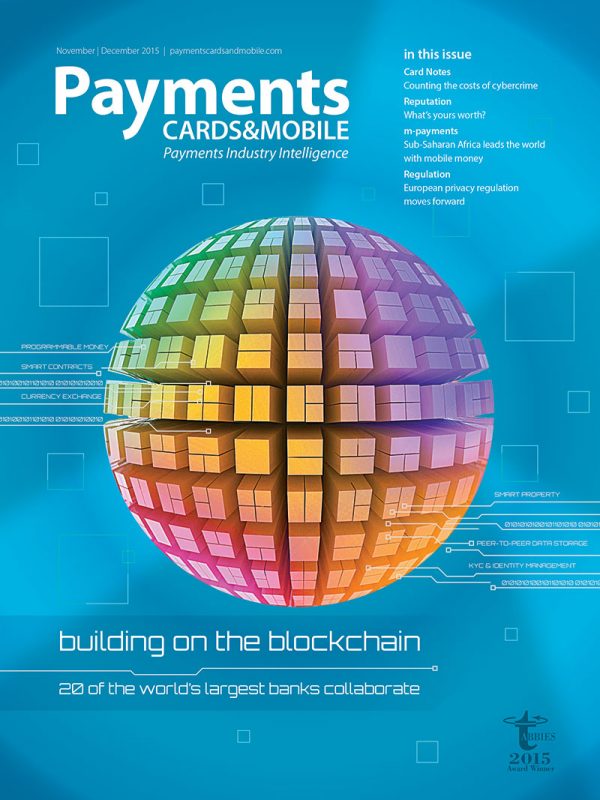 But now attention is shifting to the underlying Blockchain protocol and its potential for innovation within the financial sector.

The Blockchain protocol is attracting funding as well as column inches. More than $800 million has been invested in Bitcoin and Blockchain technology start-ups since 2012, according to data from Coindesk.

An initiative to advance distributed ledger technology drew the support of an additional 13 banks at the end of September, including Bank of America, Citi, Deutsche Bank, HSBC and Morgan Stanley, which takes the total number of banks collaborating on the project to 22.

So, how does the Blockchain work?  What are some potential uses?  And what are the considerations when evaluating the case for Blockchain innovation?

How the Blockchain works

In 2008, the pseudonymous Satoshi Nakamoto published a 9-page paper Bitcoin: a peer-to-peer electronic cash system setting out a method whereby electronic cash could be sent online from one party to another without going through a financial institution.

He brought together 4 concepts: the distributed ledger, cryptography, open source software and a ‘proof of work’ to replace trusted third party intermediaries in a financial transaction. Instead, a decentralised peer-to-peer network of nodes (or computers) would resolve a cryptographic problem (or ‘proof of work’) to verify each transaction between the members of the network. This also helped to prevent the double-spend problem inherent in digital currencies.

In effect, the system would behave like a crowd-sourced, public, bookkeeping system on the internet, noting transfers of value between participants and adding them to a chain of previous transactions. “The longest chain not only serves as proof of the sequence of events witnessed, but proof that it came from the largest pool of CPU power,” writes Nakamoto. “As long as a majority of CPU power is controlled by nodes that are not cooperating to attack the network, they’ll generate the longest chain and outpace attackers.”

The digital currency, Bitcoin, was the first and perhaps best-known application of the Blockchain. However, as with all disruptive, breakthrough innovations, Bitcoin and the underlying Blockchain protocol are creating a ripple effect of more innovation and invention.

Possible uses of the Blockchain

A number of financial institutions are exploring how to leverage the Blockchain to modernise their payment infrastructure, make their products better, and create more efficient and cost-effective processes.

“The Blockchain is a new technology that is radically different from the architecture of financial services systems to date,” says Francesco Burelli, partner, Innovalue and co-author of a recent report Blockchain and financial services — industry snapshot and possible future developments.

The distributed nature of the Blockchain facilitates a new range of databases, where each member of the network can access and store information.

“There is very little competitive advantage in the collection of documents common to all players performing know your customer (KYC),” explains Burelli.

While there could be some differentiation in how a profile is defined, or how credit scoring is done, the documents themselves have very little value. The collection of documents is a duplication, which is very costly for the industry.

“There are a number of start-ups, which are developing and testing the possibility of sharing a document database through a Blockchain application among a defined list of participants,” says Burelli.

Blockchain technology can also be used to support ‘programmable money’ where a transaction occurs only if certain conditions are met. Examples of these types of self-executing, smart contracts include making a crowdfunding donation only if the required threshold for pledges is met, or making a payment which requires the signatures of multiple parties. Software validates that the conditions are met and executes the transaction, without the input of users.

The Blockchain can also be leveraged to support the exchange of information. As it is a shared asset registry, the ownership of an asset may be defined in the digital world, and changes in ownership managed through the Blockchain. Examples of this type of smart property include stocks, bonds and commodities.

Technology for technology’s sake doesn’t have a lot of potential.
It is only where there’s a business or user problem that the application of technology gains value and relevance, and will be successful.  Francesco Burelli, partner, Innovalue

The Blockchain for payments

The Blockchain is probably best-known for the Bitcoin, its first, high-profile cryptocurrency application, launched in 2009. Bitcoin made the Blockchain famous. It also made it infamous with stories about price volatility, heists, the collapse of Bitcoin exchanges and its use for illegal purposes. But does the Blockchain have payment applications in the legitimate economy?

“In the payments world, people tend to look on the Blockchain as a way of doing more efficient payments — that is to say more economic payments. I challenge whether these statements can actually be realised,” says Dr David Everett, CEO of cryptographic security consultancy Microexpert.

“The Bitcoin Blockchain costs about $300 million each year to run, mostly on account of the computation power required for the ‘proof of work’ or mining process. This is increasing because you only have a very small community of miners. Each transaction effectively costs $7. Although people aren’t paying that, this is what the miners are being paid. So on that basis, it’s quite difficult to see how to make the Blockchain work from an economic point of view.”

Then there is the issue of transaction speed: “Each block of the current Blockchain as per Bitcoin has a fixed size of 1MB. There is a limit to the number of transactions that can be stored in a block. If it takes the miners about 10 minutes to validate a block, this translates into about 7 transactions per second,” explains Everett.

By way of comparison, Visa Europe processed more than 34,000 transactions per second across Europe during the 2013 Christmas peak season.

There is discussion within the Bitcoin community about increasing the size of each block in the Blockchain, yet even if this was increased by 10 times, it would only equate to 70 transactions per second. Which is still tiny when compared to an international payment scheme. “The Blockchain doesn’t really translate into a high volume transaction processing system,” concludes Everett.

Burelli agrees that the Blockchain is perhaps not best suited for payment — at least everyday consumer payments. “If we look at where the majority of Blockchain activity is, it’s not in the consumer-to-business transaction space. Rather, it’s in the operational side or business-to-business space, with very few exceptions.

I don’t see a cryptocurrency replacing any of the existing products or user experiences any time in the future. There is the potential to enrich the functionality of payment, for example for an asset registry. There could be back-office improvements. But I would question whether this type of change would visible to the consumer or merchant.”

The debate about public versus private Blockchains, and indeed about a decentralised versus a centralised approach, is key to the evaluation and business case for any Blockchain application.

Everett has particular views about the benefits of centralised versus decentralised ones. These are informed by his experience working as a technical and security architect on digital currencies, such as the Mondex stored-value card, MintChip for the Royal Canadian Mint, and Tibado.

“I’m a big defender of the centralised approach. If you take electronic cash based on fiat currency, as opposed to virtual currency, then why wouldn’t you have a centralised register? What advantage does a distributed one give you?” asks Everett.

His views extend to public, private and hybrid Blockchains. “The whole point of the original Blockchain was that it would avoid intermediaries and regulators. It could be a totally open, distributed system that everyone could see, but no-one could control.

If you look at insurance, identity and smart contracts, it’s quite a restriction that the Blockchain is decentralised — it’s not owned by anyone. In terms of business, that’s almost a contradiction. If there is a dispute of ownership, how will this be resolved?

You could produce a totally private Blockchain, but then you’d have to ask why?” says Everett. “If I’m running a private register of ownership, why I am not just running a database? Why do I need a Blockchain? If I needed some way of validating the data, could I do this more simply in a different way? If I owned and controlled the data, then I could validate it myself.”

Aside from the questions of decentralisation and legal standing, there is also the matter of how the information gets into the Blockchain in the first place and whether it is correct. Because Bitcoin is completely integrated into the Blockchain, that proof of ownership is intrinsic. It is built in by default.

“If you use the Blockchain as a more general proof of ownership, you have to look at how you get that proof of ownership into the system to start with. How do you know if the starting point is correct?” asks Everett.

Evaluating the business case for the Blockchain

If an organisation is considering investment in the Blockchain, the questions they should be asking are similar to those used to evaluate any new technology improvement, upgrade or product development. What is the problem that needs to be solved? To what extent do the available options and technologies solve the problem? And if the existing options do not wholly solve the problem, how does the Blockchain do this better or differently?

The ‘killer app’ for the Blockchain remains elusive.  Any organisation innovating on the Blockchain needs to bear in mind the issues of speed, scale, decentralisation and dispute resolution.

The technology is new. There may be applications for it in the future, which are small or may not even exist today, but could be significant in 5-10 years’ time.

You’ve got to think very hard to define a business case, which has a publicly accessible register of ownership, which has no legal standing.  If there is a dispute of ownership, how will this be resolved?  Dr David Everett, CEO, Microexpert

The near-term future of the Blockchain, however, looks similar to the present: collaborating on standards for interoperability, and taking a view on the perennial ‘build it, buy it or partner to get it’ question, mindful of the fact that any position may change.

As Everett concludes: “If I were a bank, I would have a team of people looking at the Blockchain. I wouldn’t want to think that something had cropped up that I hadn’t thought of…”

The post Building on the Blockchain appeared first on Payments Cards & Mobile.