Brexit is done – what are the impacts on the payments industry? 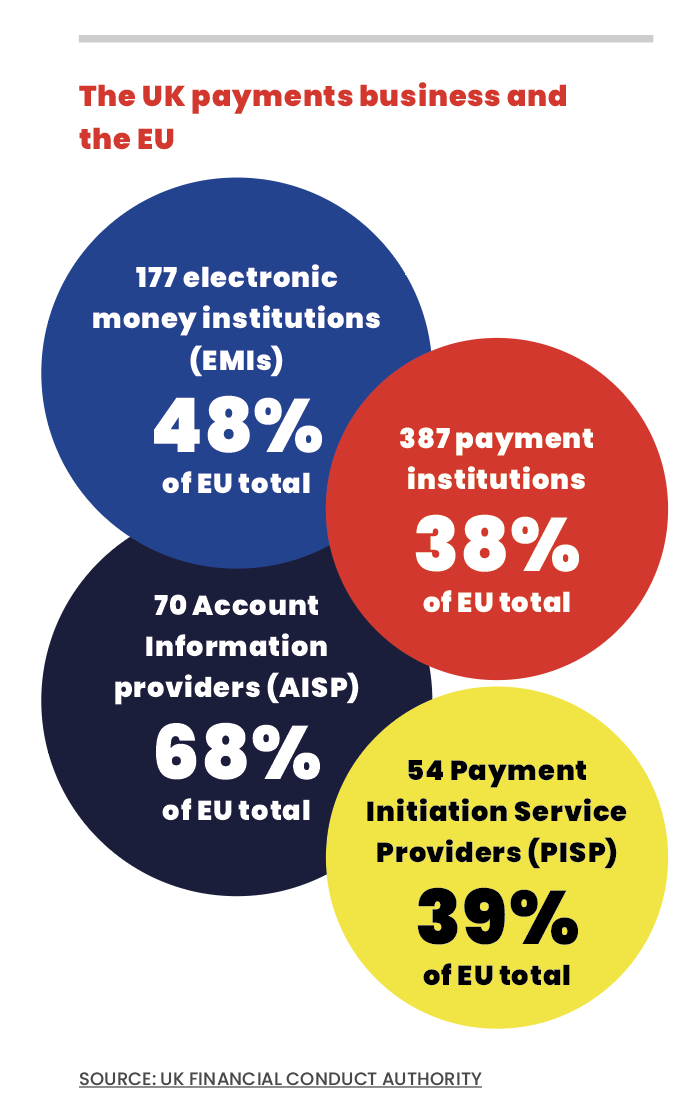 Brexit is done, and its done with a trade deal. We look at what this means for payments in the short to medium term, from passporting rights to staffing, interchange rates and digital ID.

Depending on your thinking, Brexit could be anything from a deluded attempt to recover Britain’s nineteenth century glories through to escaping from a debt-ridden, sclerotic trading bloc-cum-superstate.

While such lofty debates don’t concern us here, Britain’s decision to leave the EU generates significant risks for payments, from doing business with European markets to staffing, interchange fees and the future implementation of Open Banking and digital ID.

At its most basic level, Brexit means that the right to do business between the UK and Europe is no longer a given. While the UK’s Financial Conduct Authority (FCA) has instituted a Temporary Permissions Regime (TPR) enabling registered European payments firms to continue operating in the UK without relicensing through 2024, the European Central Bank (ECB) has been more robust.

The ECB is demanding that UK entities looking to access Europe must be licensed in the EU. Based on that license, they must acquire “passports” for all markets in which they operate.

The ECB has recently doubled down on this approach, clarifying that “failure to hire staff with sufficient seniority and skills, [and] neglecting to make necessary transfers of material assets … will not be considered as complying.

Not addressing this qualitative dimension means operating as (half-) empty shells – something we will not accept. The ECB’s expectation is very clear: all activities related to European products or European customers should … be managed and controlled … in the EU.”

This divergence has had several effects, some of which – as always – may not have been anticipated. The first has seen UK payments companies setting up EU subsidiaries to comply with the ECB’s expectations, including CEOs/Managing Directors and senior risk and operations personnel.

As Kriya Patel, CEO of Transact Payments Limited, notes: “Payments companies must take action on this now, if they haven’t done so already. We can expect regulators to be inundated with passporting requests, and approvals can take up to 90 days to approve these requests given the traffic required between regulators.”

Patel also notes UK companies should not believe passporting requirements are as uniform or harmonised as some would assume. For those offering payment services through European bank accounts in particular, otherwise known as Account-Initiated Service Providers (AISPs) there can be different standards for connecting to accounts across the European landscape.

There’s no question that this has been a challenge for many firms, especially as they cope with the fallout from the COVID-19 pandemic. As Brad Hyett, CEO of next-generation POS firm phos, says: “the additional headcount and paperwork required by those in payments to keep operating exactly as they are today can prove to be a real headache – and a no-deal will only exacerbate this. However, if companies manage to take control of these changes then the longer-term impacts should be minimal.”

“The additional headcount and paperwork required by those in the payments sector to keep operating as they are today can prove to be a real headache.” – Brad Hyett,
CEO, Phos

The unintended consequences of law

If some predicted the extra paperwork and cost, then Brexit has had other consequences few could have anticipated. The received wisdom from HM Treasury pre-referendum ran that Brexit would lead to the relocation of 100,000 financial jobs to the EU within a year after leaving. In fact, evidence cited by The Daily Telegraph and others suggests less than 10,000 jobs lost from a sector employing more than 1.1 million people, or less than 0.01 percent of all financial services employment.

Indeed, a study in UK trade journal The Actuary from January 2020 showed that more than 1,000 European firms have opened new offices in the UK, helping to offset the job losses in the other direction. More recent data from digital clearing bank ClearBank puts this number at 1,400 European companies. With London still accounting for more liquidity than Paris, Frankfurt and other European hubs combined, it seems as if the UK has retained its attractiveness as a place to do business – for now.

A second unforeseen consequence is some of the larger UK banks and payments firms that have chosen to withdraw from lower-volume European markets. In a move that could affect up to 13,000 Britons living in Europe, Lloyds Bank confirmed it will withdraw current accounts for British customers living in Holland, Slovakia, Germany, Ireland, Italy and Portugal – but retain them for France and Spain, where significant concentrations of customers live.

It’s possible that UK-based payments services providers could be forced to make similar decisions considering the wide range of passporting expectations on the part of European markets.

At one end of the scale, Lithuania promises to deliver full licensing and passporting for a business within three months, while other European jurisdictions can take up to three times as long. Such a dynamic approach has led to the Baltic state rapidly becoming a hub for international firms looking to do business in Europe, with 33 payments firms and 47 electronic money institutions (EMIs) locating there compared to a total of just 10 firms in France and 15 in Malta.

When it comes to business start-ups and business continuity, much debate has focused on outcomes for the UK. While this is laudable, evidence to date suggests that outcomes for European markets will be mixed, depending on their level of regulatory flexibility. 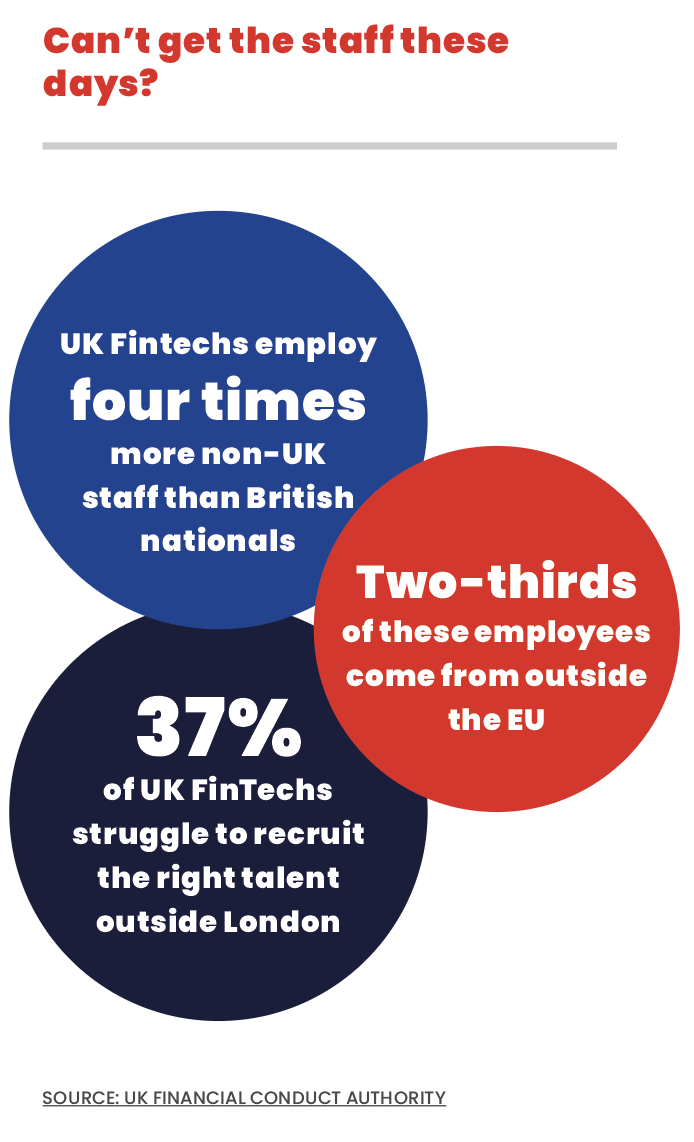 Can’t get the staff these days?

As the Brexit story continues, it’s possible that London and South-east England could find itself the victim of its own success. According to data from E&Y, UK FinTechs employ four times more non-UK staff than nationals, two-thirds of whom come from outside the EU. While applications for “settled status” for existing workers are still being accepted by the UK government, this will change from 1 January 2021.

From January 2021, those applying to work in the UK will have to gain 70 points to be eligible for a visa. They must also have an existing job offer worth more than £25,600 and speak English to a certain level to qualify for their visa. While it may be argued these new rules are less onerous than immigration to (say) the United States, there is some hard and much anecdotal evidence that such restrictions are causing concern.

For instance, E&Y report that 37 percent of UK fintechs now struggle to recruit the right quality of staff if they are not based in South-East England. If the UK government is serious about rebooting the entire nation’s economy, they will have to address this issue.

And staffing has already become a problem for some UK-based FinTechs focused on payments, as Sophie Guibaud, Chief Growth Officer at open payments FinTech OpenPayd, notes: “We’re already finding that it’s tougher to get people to come to the UK now. There’s a lot of competition in the FinTech space, and not enough talent.”

“It’s already tougher to get people to come to the UK – there’s lots of competition in FinTech, and not enough talent.” – Sophie Guibaud, OpenPayd.

There’s no doubt that Brexit has caused some companies extra administrative burdens and costs – and that the situation regarding hiring talent might most diplomatically be described as fluid. James Dillon, Senior Bank Relationship Manager at Clearbank, says that while most big firms have already settled their licensing and passporting positions, matters are not so simple for smaller companies: “There’s an unfortunate political stand-off and tense negotiations happening. These have left smaller companies on the outside, having to prepare for an uncertain environment and adding further regulatory controls and costs.”

Inside all this uncertainty, there are at least some knowns. The European Payments Council has approved the UK’s continued participation in the Single European Payment Area (SEPA) payment schemes even in a no-deal scenario.

Under SEPA rules, where a credit transfer or direct debit involves a third country participant, the full name and address of the payer must be included in the relevant payment instruction. The SEPA rules apply only to credit transfers and direct debits denominated in euro – not card payments.

From next year, UK payment service providers (PSPs) will have to provide additional information like payer name and address for credit transfers and direct debits in euro between the UK and the EEA/EU.

Adherence to the second Payment Services Directive (PSD2), promulgated by the EU in 2018, and European digital ID standards are interesting areas for the UK given its status as a global leader in open banking and digital payments.

The issue here is the extent to which the UK decides to continue with European legislation after Brexit, or diverge. In this regard, Iceland provides a possible role model: although not part of the EU, it has fully adopted the provisions of PSD2 and eIDAS to enable its financial services companies to continue to do business across the continent.

One important provision of PSD2 is its mandate for Strong Customer Authentication (SCA) in all digital transactions. In essence, SCA requires digital transaction security to be beefed up with two forms of authentication. The implementation of SCA has been dogged by slow compliance on the part of major banks and retailers, and has been kicked into the long grass with compliance extensions deep into 2021.

In the short term, there’s little reason for the UK to seek to diverge from European standards relating to transaction security or digital ID, especially since similar standards are now being adopted in Latin America, Canada and other markets. Longer term, the UK may decide that its status as a leader in Open Banking will allow it to alter security standards, especially if biometrics like face, voice and fingerprint recognition fulfil their potential.

Finally, another possible area of divergence from European standards post-Brexit lies in the area of interchange on card-initiated transactions and digital wallets linked to cards. The EU’s firm line with the major card networks and banks on interchange is well-known and caps interchange at 0.3 percent for credit cards and 0.2 percent for debit cards.

Currently, the plan is to “onshore” interchange legislation into UK law from 1 January 2021 – but only for UK transactions using UK cards. This opens up the possibility of divergence for cross-border card transactions between the UK and EU, a possible boon for banks and e-wallet companies – but not so much for consumers. Whether these firms decide to take this step remains to be seen – like so much else about Brexit.

The post Brexit is done – what are the impacts on the payments industry? appeared first on Payments Cards & Mobile.