New research by has found that the number of cross-border transactions recorded on the blockchain will surge to 1.3 billion by 2023, a CAGR of 82% over the next 4 years.

The value of transactions recorded on the blockchain will thus reach an unprecedented $3.4 trillion; a CAGR of 87% over the next 5 years. 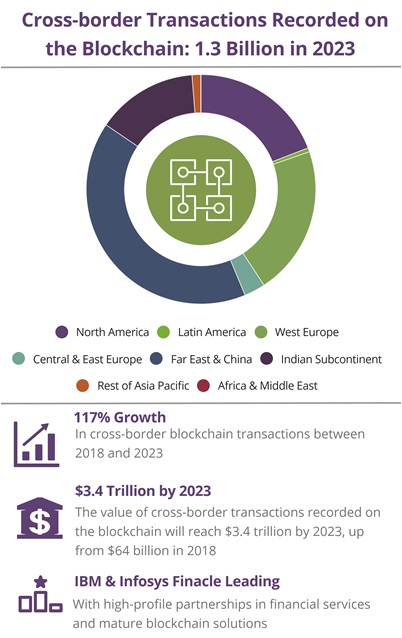 The research argues that blockchain will become critical for financial institutions aiming to improve their bottom line, anticipating that banks stand to save close to $27 billion a year by 2030 through blockchain implementation.

The research assessed 19 blockchain vendors; scoring their level of agility, presence and innovation, the complexity of their blockchain solutions and prospects in the field. It ranked the 5 leading vendors in the space as follows:
–    IBM
–    Infosys Finacle
–    Interbit
–    Deloitte
–    Digital Asset

IBM remains the indisputable leader in the space; having attracted dozens of clients in financial institutions and developed mature blockchain products, including a trade finance
platform and bespoke work on areas ranging from securities digitisation to derivatives.

Meanwhile, Infosys Finacle continues to develop its blockchain-agnostic solutions through its Blockchain Framework and Finacle Trade Connect; gaining a strong customer base among banks.

Smart Contracts at the
Core of Blockchain’s Offering

The research found that smart contracts will be key for financial institutions, particularly in the context of increasing accuracy and transparency. This is exemplified by JP Morgan Chase’s use of smart contracts to reduce compliance costs via the Quorum platform, a distributed ledger transaction network built on Ethereum.