From April to June 2021, BLIK users completed nearly 176 million transactions worth PLN 24 billion. At that time, the number of BLIK’s P2P instant payments was growing the fastest – as many as 25.5 million – an increase of 187% year-on-year.

At the end of Q2, BLIK was being actively used by nearly 8 million users, which is almost 50% more than a year earlier. In Q2 of this year users completed 176 million BLIK transactions – twice as many as in the corresponding period of 2020.

The total value of transactions also doubled compared to the first three months of last year and amounted to PLN 24 billion. The number of active BLIK users (those who make at least one transaction each month) increased to 8 million people, which is nearly half a million more than at the end of Q1 of 2021.

Nearly 70% of all transactions in Q2 of this year were online transactions, which came out to 121.5 million. Over 3.8 million of these were transactions made in global e-commerce, settled by international payment operators. 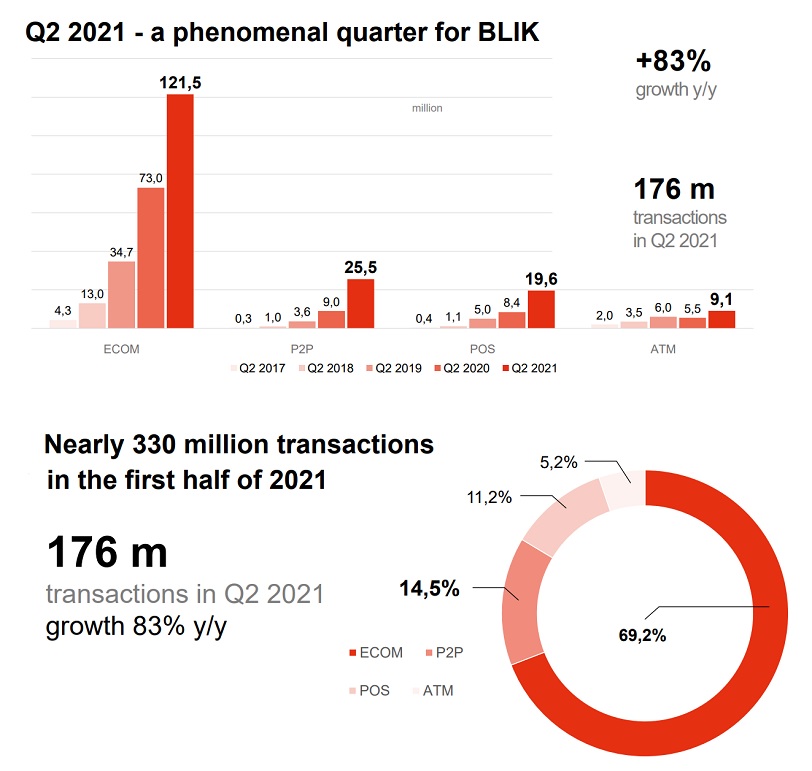 The second most-used BLIK function are P2P instant payments. They already account for nearly 15% of all transactions.

In Q2, customers used this method of transferring money as many as 25.5 million times – an increase of 187% year-on-year.

On a record day, over 450,000 BLIK transfers to the phone (P2P) were completed. The value of such transactions in Q2 reached nearly PLN 3 billion. The average for this type of transaction is PLN 118.

This method of transferring money – instantly and at any time – is available to customers of 10 banks.

“We’ve known for some time now that instant payments are the future of transactions between people. This is the fastest and easiest way to transfer money to each other cashless and hassle-free,” says Dariusz Mazurkiewicz, president of the Polish Payment Standard, operator of the BLIK mobile payment system.

“Year-on-year, the share of P2P transactions via BLIK increased by 5 percentage points, and the share of ecommerce fell below 70%. The transaction structure is becoming more and more balanced.”

The number of transactions in traditional payment terminals (POS) increased by as much as 133% year-on-year to 19.6 million in Q2 of the year. Their value at that time exceeded PLN 1 billion (the average transaction value is PLN 54).

It is worth adding that the data for Q2 does not yet include BLIK contactless transactions, which are being introduced successfully at this time.

ATM transactions in Q2 amounted to 9 million, while the number of deposits and withdrawals increased year-on-year by 65%. Their value reached nearly PLN 6 billion (83% more than in the same period last year). The average amount of a transaction at an ATM exceeds PLN 600.

The average amount of a BLIK transaction is PLN 137.