Central bank digital currencies (CBDC) are receiving more attention than ever before. Yet the motivations for issuance vary across countries, as do the policy approaches and technical designs.

A new Bank for International Settlements (BIS) report, Rise of the central bank digital currencies: drivers, approaches and technologies, investigate the economic and institutional drivers of CBDC development and take stock of design efforts. The report set out a comprehensive database of technical approaches and policy stances on issuance, relying on central bank speeches and technical reports.

Most projects are found in digitised economies with a high capacity for innovation. Work on retail CBDCs is more advanced where the informal economy is larger. The report also takes stock of the technical design options.

More and more central banks are considering retail CBDC architectures in which the CBDC is a direct cash-like claim on the central bank, but where the private sector handles all customer-facing activity. The report, authored by Raphael Auer, Giulio Cornelli and Jon Frost, concludes with an in-depth description of three distinct CBDC approaches by the central banks of China, Sweden and Canada.

As a digital liability of the central bank, wholesale CBDCs could become a new instrument for settlement between financial institutions, while retail (or general purpose) CBDCs would be a central bank liability accessible to all.

Although the concept of a CBDC was proposed decades ago (ie Tobin (1987)), attitudes about whether central banks should issue them have changed noticeably over the past year. Initially, central banks focused on systemic implications that warranted caution. But over time, the need to respond to the declining use of cash in some countries came to the fore, and a number of central banks have warmed to the idea of issuing a CBDC.

A tipping point was the announcement of Facebook’s Libra and the ensuing public sector response. As of late 2019, central banks representing a fifth of the world’s population reported that they were likely to issue CBDCs very soon.

Similarly, the share of central banks (by number) that are likely to issue a retail CBDC over the medium term (in one to six years) doubled in 2019, to 20%. Meanwhile, a full 80% of surveyed central banks are engaging in research, experimentation or development of CBDCs.

During the COVID-19 pandemic, social distancing measures, public concerns that cash may transmit the COVID-19 virus and new government-to-person payment schemes have further sped up the shift toward digital payments, and may give a further impetus to CBDC.

As a result, CBDCs have seized global attention and feature broadly in central bank communications and public search interest. Still, no major jurisdiction has decided to issue a retail CBDC, and many open questions remain.

In the growing literature on CBDCs, discussions centre on several fundamental aspects. One is how central banks should create money and whether CBDCs are desirable in that context. Another area is the systemic implications of CBDCs and how to cope with them. There is also work on policy design frameworks, their implications for cross-country payments, implications for the international role of currencies and legal aspects of their issuance.

Finally, the technology of retail CBDCs and how they relate to private sector proposals is hotly contested. Much less contentious is the issuance of wholesale CBDCs. 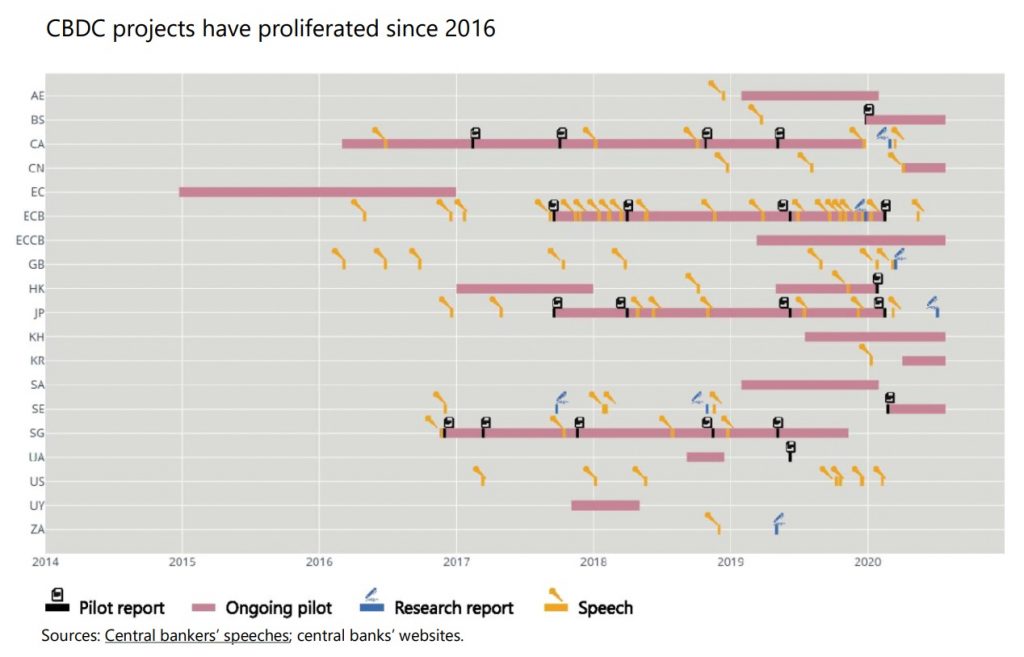 Amidst intense discussion in the research and policy spheres (BIS (2020)), and early development efforts, the study analyses the economic and institutional drivers of CBDC projects, thus shedding light on ultimate motivations.

A next step is to understand the policy approaches and technical design of the various projects, and to look for commonalities and differences across countries. The questions this paper aims to answer are:

To answer these questions, the report first develops a novel CBDC project index based on central bank research and development (R&D) projects. It then empirically investigate common factors in countries that are investigating and piloting CBDCs.

The report finds that higher mobile phone usage (a measure of an economy’s overall digitisation) and higher innovation capacity are positively associated with the likelihood that a country is currently researching or developing a CBDC. Retail CBDCs are more likely where there is a larger informal economy, and wholesale CBDCs are more advanced in economies that have higher financial development. 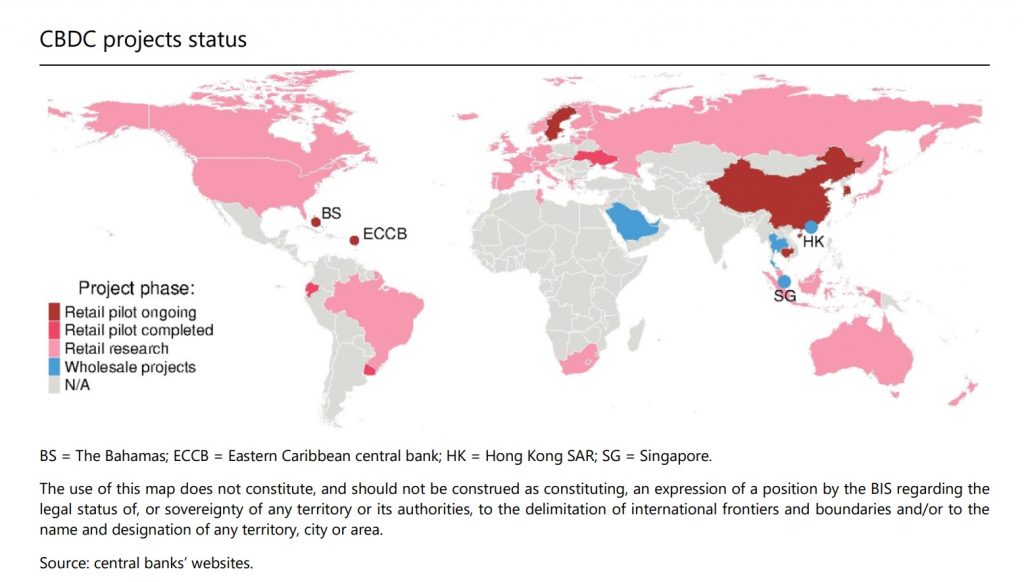 Next, it looks at four attributes of CBDC technical designs, following the taxonomy of Auer and Böhme (2020). It shows that a rising number of central banks are considering “Hybrid” or “Intermediated” architectures where the CBDC is a cashlike direct claim on the central bank, but the private sector manages customer-facing activity.

Only a small number of jurisdictions are considering designs in which the central bank takes on an important operational role in the customer-facing side of payments. None of the central bank reports favour a design with indirect claims on the central bank (referred to as an “Indirect” or “Synthetic” CBDC architecture).

Whereas many central banks are considering multiple technological options simultaneously, current proofs-of-concept tend to be based on distributed ledger technology (DLT) rather than a conventional technological infrastructure.

Rise of the central bank digital currencies: drivers, approaches and technologies examines how the features of these CBDCs fit with each other and the unique economic structures and preferences of their populations.

Finally, it shows that the circumstances of each jurisdiction also matter for the policy approach taken to researching and developing a CBDC. Based on public reports and in-depth interviews with the experts in respective central banks, it describe three advanced approaches: the Chinese Digital Currency Electronic Payments (DC/EP), the Swedish e-krona and the Bank of Canada’s CBDC contingency plan. While these projects are each tailored to their national context, there are lessons for other jurisdictions.