Big changes in US Debit industry

The 2015 Debit Issuer Study, commissioned by PULSE, one of the nation’s leading debit/ATM networks, highlights the underlying trends that have contributed to the rise of debit during the 10 years since the study was introduced. The analysis of the past “Decade of Debit” finds the use of debit increasing significantly at the point of sale: 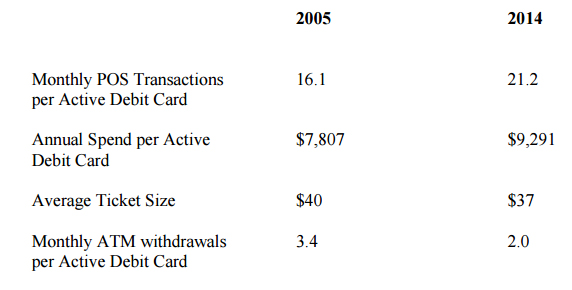 US debit card use

“The past decade saw a major shift in consumer preference to paying with debit cards, which accelerated after the 2008-2009 recession,” said Steve Sievert, Executive Vice President of Marketing and Communications for PULSE.

“We believe there is still opportunity for debit growth, considering that consumer use of debit for smaller purchases is rising, and the average active debit card is used about five times per week.”

The average active cardholder conducted 23.2 debit transactions (POS and ATM) per month last year, according to the study. During this decade, the average debit cardholder increased usage of debit at the POS by 32 percent. In the same timeframe, card use for ATM withdrawals declined by 41 percent.

“Consumer use of debit has been nothing short of remarkable,” said Tony Hayes, a partner at Oliver Wyman, who co-led the study. “Debit has steadily gained wallet share as consumers shift their spending to this payment type. The use of debit for small-ticket purchases is particularly noteworthy, where one-third of all debit transactions are for less than $10 – purchases that historically would have been made with cash or not at all.”

Ten years ago, financial institutions reported receiving a weighted average interchange of $0.41 for each consumer debit transaction. The introduction of Regulation II, which went into effect in the fourth quarter of 2011, fundamentally changed debit economics.

In 2014, regulated financial institutions earned a weighted average of $0.24 per debit transaction, and exempt financial institutions earned $0.40, according to the study. In addition to tracking debit interchange rates, the study also reports on debit revenue, beginning in 2008. In that year, debit issuers earned an average of $81 in annual interchange income per active consumer debit card.

According to this year’s study data, exempt issuers generated average annual debit interchange revenue of $112 per card. Regulated issuers received average interchange income of $59 per card, with transaction growth helping to offset a portion of the impact of lower per transaction rates.

“Debit continues to show resilience as a preferred payment type by consumers,” said Sievert. “The study reveals that debit remains a key source of non-interest income for both regulated and exempt financial institutions at current interchange rates and card usage levels.”

For the first time, the study collected information on the rate at which financial institutions acquire new account holders as well as lose existing ones, since both influence the total debit card base. Approximately one in five US account holders switches financial institutions each year. In aggregate, the US banking industry issues 165 million new debit cards per year. The mass reissuance for data breaches and cards for new customers are the two largest drivers of this demand.