The rate dipped from 73 cents to 57 cents for every $1000 spent on cards, a level not seen since 2014 and below that of comparable countries internationally.

Consumers are not liable for fraud on their cards and will be reimbursed as long as they take due care.

Card-not-present (CNP) fraud, mainly affecting online transactions, declined 18% to $403 million in 2019. This decline coincided in part with the introduction in July 2019 of the CNP Fraud Mitigation Framework, a key industry-wide initiative to counter CNP fraud. 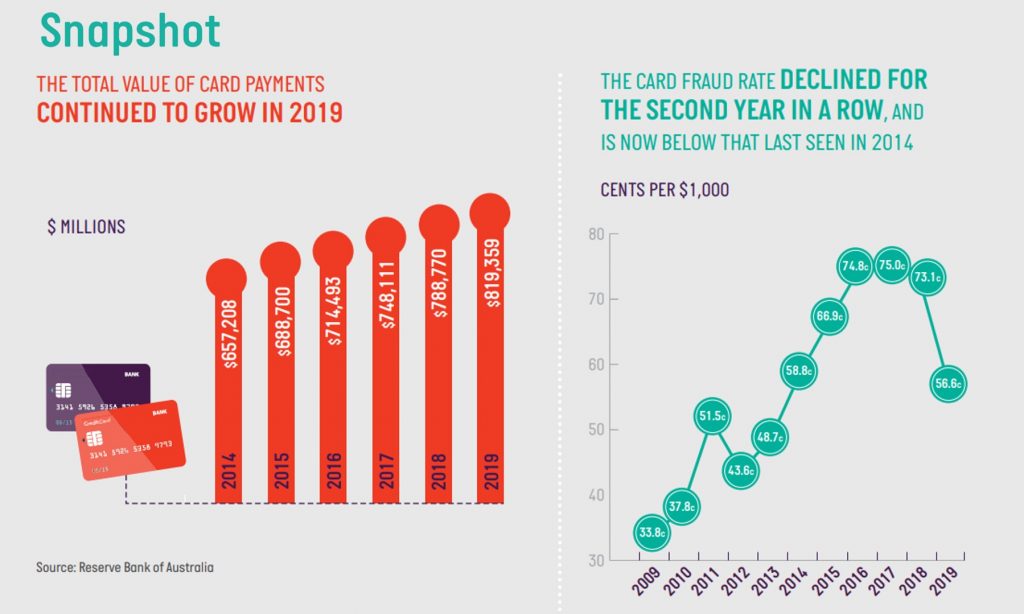 CNP fraud occurs when valid card details are stolen and used to make purchases or other payments without the card being present, usually online. It has grown steadily in recent years in line with the growth in e-commerce, dropping in 2019 but still accounting for 87% of all card fraud.

AusPayNet’s data also shows sharp declines in other types of card fraud, with fraud on Lost and Stolen cards down 37% and Counterfeit/Skimming fraud down 14.3%.

“It is early days but based on the 2019 data, the impact of the CNP fraud framework is starting to show,” White said. “The early experience reinforces that a whole of industry approach is required to reduce fraud. Just as chip technology has shut down the space for skimming and counterfeit fraud, we have reason to be optimistic that we have turned the corner on online card fraud.  However, we need to remain vigilant as e-commerce volumes increase during the COVID‑19 pandemic.  Moreover, criminals will be looking for new opportunities through scams,” he said.

The AusPayNet fraud report includes a spotlight on payment scams, to increase awareness about this growing type of criminal activity.

The report cites ACCC figures showing that the losses from payment scams reported to the ACCC increased by 34% to $143 million in 2019 and losses reported to all entities reached $634 million.

“We know from experience that as one area of payments fraud become harder, criminal groups turn their attention to other areas and we may be seeing that now with payment scams,” continues White. “Payments participants and consumers alike all have a role to play in being vigilant against fraud attempts and these are highlighted in today’s report.”