ATM report: How will the ATM survive the digitisation of payments

2020 marks the 13th edition of the ATM and Self-Service Software Trends report. And for the self-service banking segment, what a year it’s been already.

The second decade of the 21st century got off to a blazing start with the end of support for Microsoft Windows 7, the operating software that supports virtually every bank-owned ATM in the world, as well as a sizeable number of non-bank-owned ATMs.

Microsoft’s grand selling proposition for Windows 10 has largely been its promised security. As one blog stated: “Windows 10 sports a built-in firewall and security scan system in addition to the usual patches and updates that come with standard Microsoft support. One of the most anticipated features, Device Guard, runs as a sidecar system alongside the main OS. The program is engineered to detect and prevent emerging threats from malware and other up-and-coming cyber threats.”

Additionally, Win 10 promises greater speed, an improved interface and expanded transaction sets, with support for capabilities such as learned preferences and e-receipts.

An OS migration would be the Big News for the ATM industry in any normal year. But, 2020 has been anything but normal. Even as banks around the globe were upgrading or replacing their ATMs to take advantage of Windows 10 and its high-tech security offerings, the world began to take note of a lowtech threat that literally would change everyday life as we knew it.

That threat, of course, would be COVID-19. 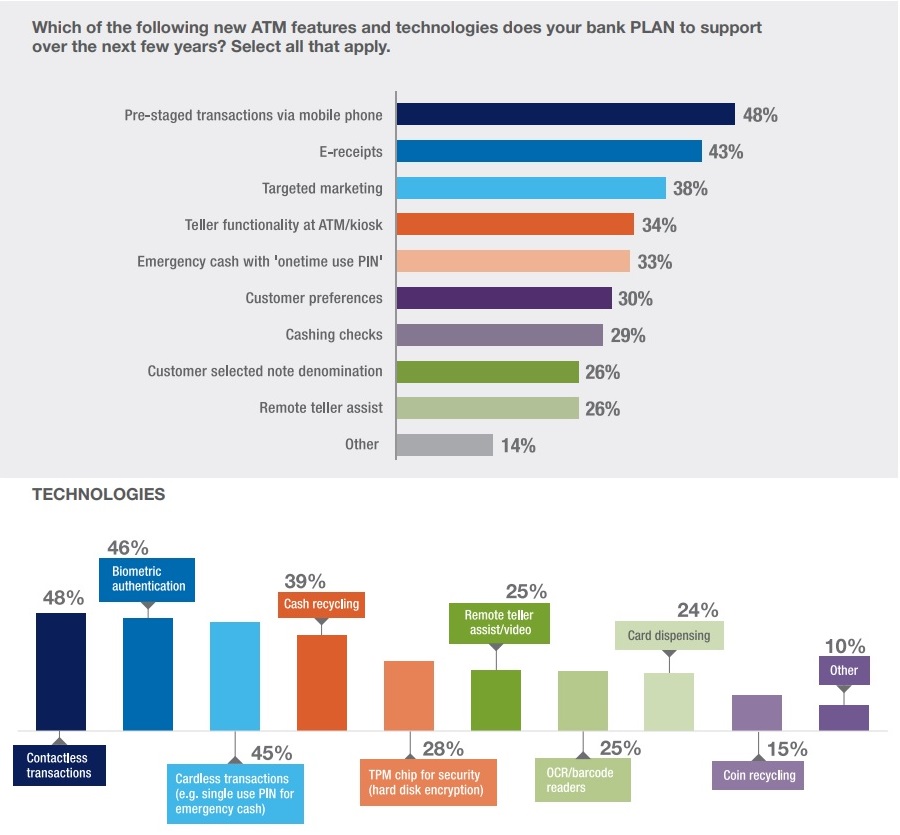 For ATMs, the implications are mixed: Advanced-functionality ATMs, video teller machines and other remote teller devices — already a mainstay of branch transformation initiatives — can provide an excellent alternative to in-person, in-branch interactions with an extensive offering of features and capabilities. For one reason or another, they are sure to gain ground in a post pandemic interaction-averse landscape.

For simple cash dispensers and other, limited-functionality devices, however, the picture is more challenging for a couple of reasons:

In March 2020, The Telegraph stoked worries about the advisability of using cash in an article that quoted a representative of the World Health Organization. Immediately afterward, WHO clarified that it “did NOT say banknotes would transmit COVID-19, nor have we issued any warnings or statements about this.”

As a follow-up, several central banks, including Bank of England, Bundesbank, Bank of Canada and the South African Reserve Bank issued statements reassuring the public. “The risk posed by handling a polymer note is no greater than touching any other common surfaces such as handrails, doorknobs or credit cards,” Bank of England advised.

It is worth noting that, while visits to ATMs declined in number with the onset of the pandemic, the quantity of cash requested per visit increased as cardholders rattled by disruption and uncertainty stockpiled cash in case of emergency.

Much of that cash has come from government benefits programs designed to support individuals and families affected by the pandemic, not only in developed nations, but also in emerging and low-income countries, according to an International Monetary Fund blog.

This has heightened the need for reliable and effective cash distribution systems of all varieties — from cash agents to retail teller machines to cash dispensers and multifunction terminals.

According to the IMF, Ecuador doubled its number of licensed cash agents within the span of just two weeks. Meanwhile, in New York City, cardholders waited in line for hours at ATMs operated by KeyBank, the sole EBT card administrator for New York state’s unemployment program.

Benefits cardholders could draw cash from other ATMs for a fee, but those transaction limits were far lower than the $1,500 maximum allowed at KeyBank machines, according to a New York Times report.

According to a report by the Financial Times, John Howells, chief executive of the UK based Link ATM network, said that many consumers who were heavy cash users had reluctantly switched to digital payments and were happy with the change and likely to make it permanent.

As yet, though, it’s purely speculation as to whether day-to-day changes precipitated by the global pandemic will persist after it has passed. In the meantime, the report present the results from the 2020 survey, which was conducted online during the early days of the pandemic.

In Chapter 1, it examines the status quo for ATM features and technologies, and check on progress made toward implementing new functionalities designed to improve ATM performance and the customer experience. It also checks in on banks’ longer-term plans for their own networks and for the ATM and self-service channel overall.

In Chapter 2, the report turns its attention to ongoing branch transformation and rationalization trends and the challenges and opportunities these present for the ATM channel.

Chapter 3 is an in-depth look at recurring issues around Windows operating system upgrades and stock take of the current migration to Windows 10.

More generally, the report looks at how banks are meeting their customers’ demands for full-function ATMs that deliver on the “high tech-expectations” of a mobile-centric public? How will bank customers accept the increased use self-service systems tasked with performing scores of branch transactions? Where are banks finding cost efficiencies to justify the needed high-tech investments?

The post ATM report: How will the ATM survive the digitisation of payments appeared first on Payments Cards & Mobile.