According to new report by Allied Market Research titled “Global ATM Market – Size, Industry Analysis, Trends, Opportunities, Growth and Forecast, 2013-2020,” the global ATM market will reach $21.9 billion by 2020, registering a CAGR of 7.6% during the forecast period 2014-2020. 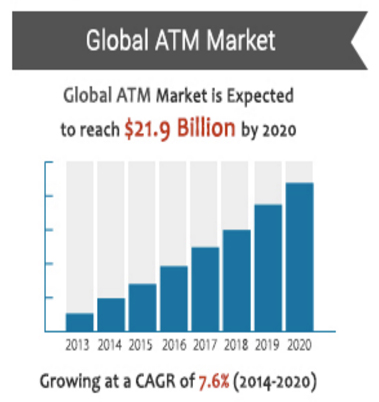 frauds that arise due to card skimming, a factor that prominently drives the adoption of s which is consequentially spurring the global ATM market.

The North American region accounted for ~68,000 million of ATM transactions in 2013, which clearly shows the widespread adoption of ATM services in the developed regions. Unlike developed countries, the ATM market in Asia Pacific is in its developing phase. China, for instance, has tripled its ATM installations from 130,000 in 2007 to 339,000 in 2011.

The diverse services and offerings in financial transactions are the major drivers for the global ATM market. Thefts, online frauds, and network connectivity issues while using mobile ATMs & smart ATMs, are some of the major threats to the growth of the ATM market.

The growing use of solar powered ATM machines is reducing the cost of ATMs, leading to minimal operational cost. According to the “Federal Reserve System”, ATM market in developed countries such as US, UK, Canada and France has attained state of maturity, while the “Reserve Bank of India” forecasts a rapid growth of ATM market in emerging countries.

Deployment of ATMs at different locations such as Onsite, Offsite, Worksite and the accessibility to Mobile ATMs have facilitated 24*7 availability of banking services to the customers that creates an avenue for promotional activities to the banks concerned. Brown label ATM, allows the banks to focus on their core business, as the hardware and its lease is owned by third party vendors, and the cash management & network connectivity is owned by the bank, eventually reducing the operational cost of the ATM’s.

The introduction of white label ATMs in the developing countries would propel the ATM markets in the years ahead. As an example, the Independent ATM deployer (IAD) viz., Tata Communications Payment Solutions Limited has launched a white label ATM – “Indicash”, to provide better banking services to the customers. IADs in the North American region account for more than 50% of ATMs. Whereas, in Western Europe, Asia Pacific, and LAMEA, it accounts for about 12%. The widespread installation of ATMs around the globe has led to a need for managed services. Therefore, different market players such as NCR Corporation, Wincor Nixdorf, Fujitsu and Diebold Incorporation are capitalizing on the prevailing market opportunities by offering managed services for ATMs.

Key findings of the study:

ATM manufacturers and managed service providers are shifting towards White label ATMs and Smart ATMs in order to provide secured ATM transactions and improve the efficiency of the ATMs, resulting in faster transactions. In 2014, Fujitsu introduced a Smart ATM in the European market, which facilitates operational efficiency.