Global ATM cash withdrawal volumes grew by 7% in 2014 with a total of 92 billion withdrawals made, according to a newly published Global ATM Market and Forecasts to 2020 report. Growth in the number of ATMs was even higher, and the global installed base passed the three million mark. In light of the so-called “war on cash” in some countries, these increases may seem surprising. 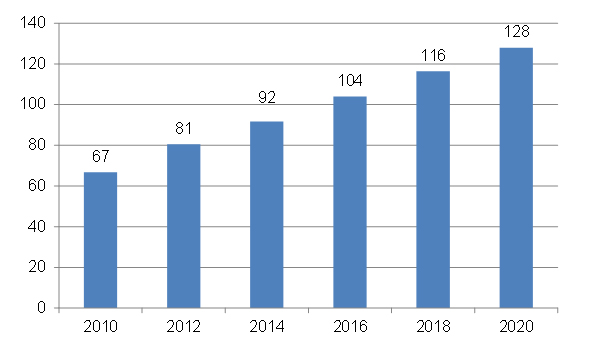 Growth in ATM withdrawals was strongest in the Asia-Pacific and Middle East and Africa regions – in many developing markets ATM usage is growing at a far greater pace than ATM deployment. Both Bangladesh and Vietnam saw annual withdrawal volumes rise by a quarter – driven by increasing numbers of cards being issued to their large unbanked populations – although these countries’ installed bases only grew by 11% and 4% respectively.

China stands out as the country where deployment was far greater than growth in ATM withdrawal volumes. To serve the huge number of people entering the banking system, Chinese banks added 95,000 ATMs in 2014 – an 18% increase in the installed base compared to just 10% growth in withdrawal volumes. RBR forecasts that deployment by Chinese banks will slow as the market matures, and ATM usage should surpass deployment again.

ATM usage levels are stagnating or even declining in some more mature markets, but all regions except North America saw growth in the total volume of withdrawals. Globally, the increase in ATM usage is forecast to outpace the growth in the installed base of ATMs between 2015 and 2020, to reach 128 billion, indicating that the appetite for cash remains strong.