Apple Pay is reported to be in discussions with US banks to develop a P2P payments service that will let users send money to one another from their phones rather than relying on cash or checks.

The move would put the tech giant in competition with an increasing number of Silicon Valley firms trying to persuade Americans to ditch their wallets in favor of digital options.

A small but growing number of Americans are already starting to embrace such services allowing consumers to pay baby sitters, split dinner checks and share other bills – reports the WSJ.

The talks with banks are continuing and it is unclear if any of the firms have struck an agreement with Apple. Key details remain in flux, including technical aspects that would determine how the service would tie into the banking industry’s existing infrastructure.

If Apple’s plans go forward, the service would likely be similar to PayPal’s Venmo platform, which is popular among younger consumers to do things such as pitch in on gifts and share rent payments with room mates.

It isn’t clear how Apple will make money on the service, but the move is another effort by the firm to tighten its hold on customers by getting them to use their iPhones for everyday needs, including financial services.

It also represents the latest attempt by banks and other providers to shift Americans away from cash and checks, which can be more costly and less efficient for the banks and less convenient for customers. Those methods are still the most popular ways people send money to friends and pay service providers such as handymen.

The Apple service under consideration would allow consumers to send payments from their checking accounts to recipients through their Apple devices. It would likely be linked to the company’s Apple Pay system, which allows customers to make credit-card and debit-card payments with mobile phones.

A launch isn’t imminent, but one person said such a service could get off the ground next year. This year, Apple was granted a US patent for an encrypted P2P payments system using electronic devices that communicate wirelessly.

Apple has been talking with a number of banks about the service, including J.P. Morgan Chase, Capital One, Wells Fargo and U.S. Bancorp.

Most P2P payments services allow users to send money to friends or others via an app on phones, typically by putting in the recipients’ phone number or email address. The transfers are generally free, though the providers charge for certain transactions such as when a payment is funded from a credit card rather than a checking account.

Venmo is one of the fastest-expanding services, accounting for 19% of mobile P2P payments, according to a report from Aite Group. It is favored by young adults and teenagers who particularly like a feature in which they can list their payments on a social-media feed. Consumers made $2.1 billion of mobile payments using Venmo in the third quarter, up from $700 million in the year-earlier period, according to PayPal. 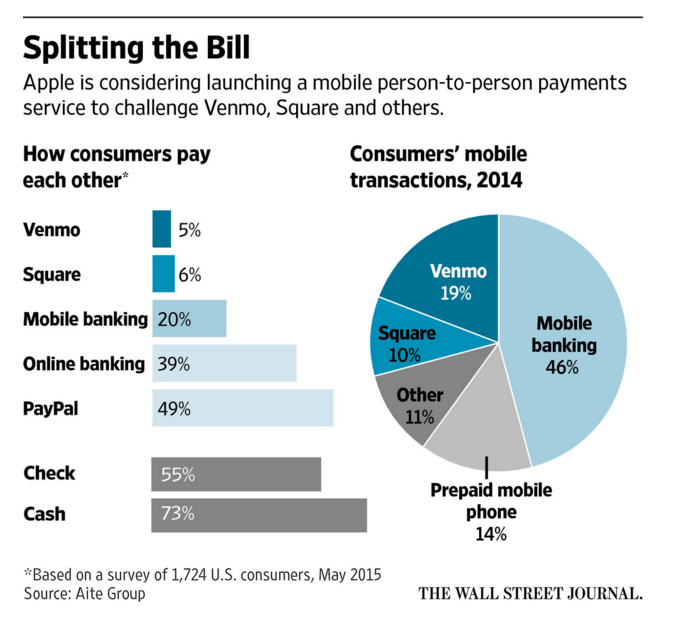 How consumers pay each other using P2P