Global mobile commerce is now a huge 34% of all e-commerce transactions worldwide and is predicted to grow 31% in 2017. That’s over 200% faster than the growth of the entire e-commerce market. 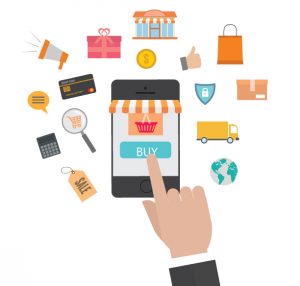 That’s why we can no longer talk about mobile commerce as being a part of e-commerce. Instead, we must distinguish between online retail and an app commerce industry that is estimated to be worth more than £40 billion – writes Dennis Jones, CEO of Judopay.

Since the release of the iPhone 2.0 in 2008, and with it the dawn of the App Store, the promises of app commerce have spawned hundreds of businesses, attracted billions in venture investment, and provided great fodder for business predictions from many, including me.

We’ve noted that the mobile revolution has the capacity to fundamentally change the way we engage in commerce – that moving decision making closer to consumer impulse will lead to more sales. The way to do this is to take advantage of the super computers in our pockets.

I am, of course, speaking of app commerce – not mobile (or m-) commerce – because it is apps that have the power to truly change not only the path to purchase, but also how businesses interact with their most loyal customers.

In the 12 months to June 2016, more than half of all Americans (55%) with a smartphone and a debit card engaged with app commerce, up from 23% in mid-2015, according to consultancy First Annapolis. Many will have booked an Uber or an overnight stay with Airbnb; others will have changed the way they interact with the high-street brands which have been quick to adapt to this app-happy user base.

Starbucks, for example, now has over 20% of all its transactions going through its apps. In the U.S., Chick-fil-A was the number one app in the App Store for weeks. Dominos has gained a significant competitive edge over arch rival Pizza Hut because of its leadership in app commerce and Dunkin’ Donuts has chased after Starbucks with mobile ordering from the start.

In the year ahead, these and other trailblazers will disrupt more and more verticals. Much like Amazon expanded away from books, Uber has now expanded into Uber Eats. In the UK, incumbents are moving quickly to respond – in the taxi industry alone, large players have developed their own Uber-style apps and are successfully defending their market share These businesses are showcasing what’s to come for many other verticals, from food to ticketing and proving that British businesses can adapt and innovate like the leading American firms.

The businesses that are already experimenting with app commerce and learning from their customers are likely to stay ahead of the curve in 2017. But many have never had a digital business line (like fast food) and do not have the organisational structure or talent to deliver high quality consumer experiences – as a result, they are being too slow or apprehensive to invest in apps. Furthermore, industries across all verticals need to resolve severe shortages of developers and designers that really understand app commerce.

Additionally, many companies are outsourcing the production and management of their apps to third parties, as they did with e-commerce, therefore foregoing huge opportunities to learn. Those that do try to build in-house should budget for the learning cycles, to avoid being too quick to call apps a failure if they don’t get it perfect the first time.

Currently, too many businesses are putting the CTO in charge of apps and CFOs are making payment decisions based on a card present world. The winners in 2017 will be those brands who are hiring and empowering Chief Digital Officers and customer experience executives. The status quo will not work. Radical change in structure and investment in alternative personnel is now essential.

When it comes to payments, businesses that work with specialist providers and mimic the experiences of the trailblazers will also see more success in the year ahead.

If you’re questioning how big app commerce can be, take fast food as a simple example. The name gives a clear indication of what people want: food, fast. Would you prefer to wait in a ten-person line or tap your smartphone a few times before arriving to collect your order? McDonalds has recognized this and now plans to roll out a mobile order-and-pay service in key markets over the coming year.

Fast food in the US alone is a $200billion market. The taxi market is $100billion+ globally. Trains, buses, gas, groceries, convenience stores… the list of target verticals is long, even when limiting to those that are more or less ‘new to digital’.

Businesses and service providers need to take note – app commerce is here and in 2017 it will take-off in a big way.

The post App commerce set to explode in 2017 to $40 billion appeared first on Payments Cards & Mobile.