App-athy towards financial apps as 11.2 million dormant on UK mobiles and tablets

The UK is now the third largest market in Europe for financial app downloads (with a 19% growth since 2017) yet users currently show significant ‘app-athy’ for technology that can help them save and invest.

The latest data from Wealthify reveals that 11.2 million downloaded money management apps remain unused and lie dormant on mobiles and tablets. What’s more, the UK ranks 13th in the EU Household Savings report, despite being the fifth largest economy in the world. This all points to the fact that UK consumers are not taking advantage of the free and widely available tools that can help them manage, save and invest their money. 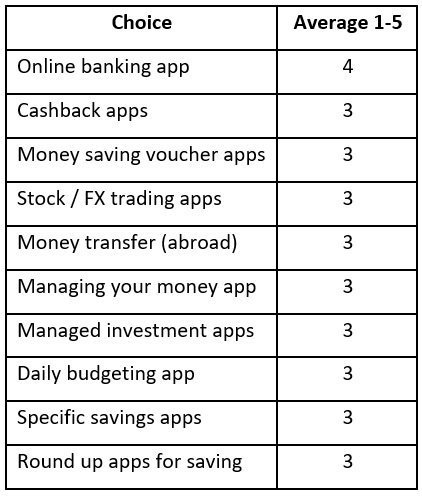 The rise and fall of financial app use

Ownership of financial apps is generally high, with just over 67% of smartphone users having added at least one financial app to their device.  However, over 11 million downloaded financial apps are never used and those with unused financial apps on their phone will typically have three unused apps, so the question is – why are these good intentions going to waste and what’s stopping people utilising this smart technology that’s at their fingertips?

The research found the majority of financial apps downloaded by the public are online banking apps (93%), compared to just 7% for savings and 5% for investing apps. Collectively only 15% of the population (around 4.5 million people) use apps to help them fill up their savings, investments or retirement pots, despite them typically being free to use and designed to make the process simple, effortless and transparent.

Meanwhile almost half of smartphone users actively use other types of money apps, such as voucher apps (47%) and cashback apps (46%) for things like shopping and eating out.

To explore the motivations behind the UK’s use of financial apps, the respondents were asked what goals they had in mind when downloading them. The top goal was to access online banking efficiently (58%), followed by almost as many (57%) who want to help manage their finances better.

“Despite the digital revolution and a wealth of free-to-download finance apps available to help people save and invest, it is a real shame so many of these apps sit unused on people’s phones,” says Michelle Pearce-Burke, CIO and co-founder of Wealthify.

“The fact that so many are downloading these apps in the first place shows a clear will amongst people to take control of finances, which raises the question – what can financial app developers do to better engage with users and encourage the move from ‘downloaded’ to regular use? Making the benefits to the user clearer should help people’s perception of the apps’ usefulness up from the ‘average’ score users gave most types of financial app in our research.”

The post App-athy towards financial apps as 11.2 million dormant on UK mobiles and tablets appeared first on Payments Cards & Mobile.