The Asia Pacific mobile wallet market is set to grow from its current market value of more than $35 billion to over $140 billion by 2024.

The increasing penetration of smartphones and the widespread adoption of the internet are the primary factors accelerating the demand for mobile wallets market in the region -according to a new research report by Global Market Insights . 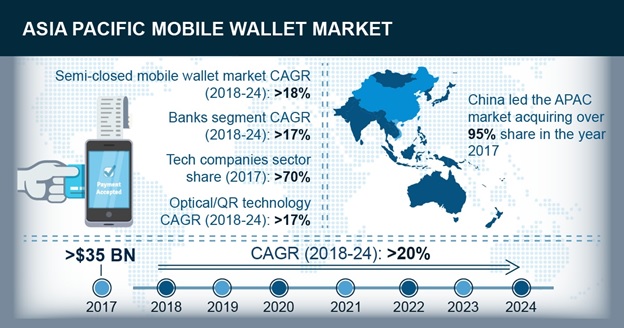 China and India are home to more than 50% of the smartphone population across the globe. The number is projected to increase during the forecast period due to the decline in the price of smartphones and the increasing disposable income of the middle class in the Asia Pacific region.

Moreover, the changing customer demand and market dynamics also act as major drivers for the mobile wallets market. As the competition among market players is increasing, customers are becoming more empowered. As a result, financial institutes start to focus more on providing better customer experience and developing more customer-centric products. These companies are leveraging on mobile solutions to reach unbanked & underserved customers in remote areas.

NFC technology is estimated to grow at a CAGR of over 29% during the forecast period. The growing adoption of non-contact payment solutions along with the integration of NFC chips into smart devices (such as smartphones and wearables) is driving the market growth.

Moreover, the increasing interest of the top smartphone manufacturers, such as Apple, Samsung, Xiaomi, in the mobile wallet solutions is presenting a huge opportunity for the NFC technology market.

The India mobile wallets market is estimated to grow at a CAGR of approximately 30% over the forecast period. The growth of the market is driven by supportive government initiatives and policies.

These players are leveraging on collaboration activities to gain a competitive edge. For instance, in 2017, Vodafone Group partnered with Ridlr app to offer a seamless BEST Bus ticket booking service. This partnership is aimed at competing with its local competitors such as Jio Money and Paytm.