The T&E sector, consisting of American Express, JCB and Diners Club, represents only a small proportion of the total payment cards market, but is nevertheless a huge segment in its own right.

Use of T&E cards varies widely by sector and geography, and spending per card is high compared to 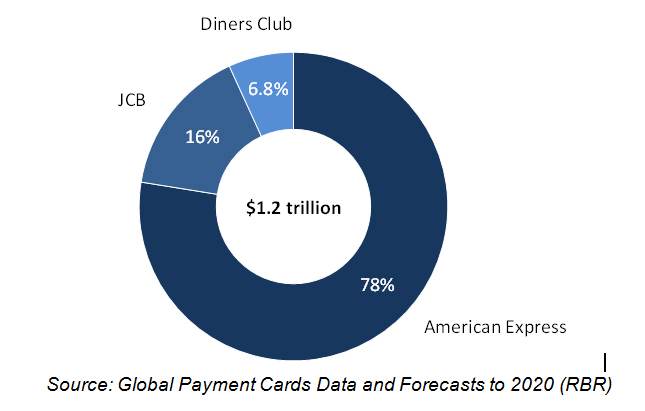 other types of card. American Express is the largest of the T&E players and accounts for more than three quarters of global T&E card expenditure.

According to RBR’s report, Global Payment Cards Data and Forecasts to 2020, T&E cards – predominantly charge and credit products – were used for payments amounting to $1.2 trillion in 2014, equating to 6% of the $20 trillion spent on all cards globally. This represents a slight fall in proportion of total card spending since 2013, reflecting the stronger growth in the pay-now sector than the pay-later sector. T&E cards are typically more frequently used in mature markets; their share of spending ranges from 1% in central and eastern Europe and the Middle East and Africa to 14% in North America.

American Express sees a small gain in share in 2014

American Express accounted for 78% of global T&E card expenditure in 2014, with most of the remainder being carried out on JCB cards. Whilst shares of spending for all three schemes remained relatively stable in 2014, American Express made modest gains at the expense of Diners Club.

JCB’s share of T&E spending is lower than its share of cards as this scheme is most widely issued in Japan where such cards are used for relatively low-value purchases compared to other countries. In contrast, American Express accounts for a higher share of T&E value than card numbers.

JCB strong in Asia, but lags behind American Express in other regions

RBR’s study shows that while JCB is the largest T&E scheme in its home region of Asia-Pacific, with a 61% share of spending on such cards, it trails far behind its T&E rivals in all other world regions. This is because JCB cards are issued on a limited scale outside Asia-Pacific, where acceptance is also sparser. American Express’s highest regional share of T&E expenditure is in its home region of North America.

The T&E schemes are now all accepted at more than half of merchant outlets worldwide and in many countries are offered as mass-market consumer cards. RBR predicts that future scheme shares will be influenced by these organisations’ success in further extending acceptance beyond the core travel and entertainment acceptors, and cardholding beyond the commercial and upmarket sectors.