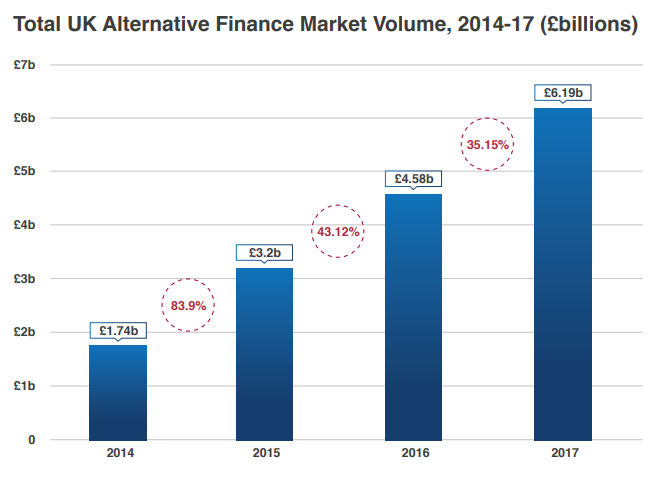 P2P Consumer Lending recorded just over £1.4 billion in 2017, whilst P2P Property Lending achieved £1.2 billion and Invoice Trading registered £787 million. Equity-based Crowdfunding grew by 22% year-on-year to reach £333 million, but Debt-based Securities stagnated to £79 million, a drop of £5 million compared to 2016 – according to an academic paper by Cambridge Centre for Alternative Finance.

Online alternative finance channels have become an increasingly important conduit for SME financing in the UK. In 2017, £4.2 billion of business funding, which is 68% of the total market volume for alternative finance, was raised via online platforms and channelled to start-ups and SMEs across the country.

Over 90% of the online alternative finance for business was in debt, with the remainder in equity and non-investment models. To put the alternative business funding data in context, in 2017, based on the UK Finance baseline data, the P2P Business Lending contributed an equivalent of 9.5% of total new loans issued to SMEs by the UK banks.

Given that most of the businesses receiving online P2P lending loans are, in fact, small businesses with an annual turnover of less than £2 million, the higher-bound estimation is that P2P Business Lending in 2017 was equivalent to 29.2% of all new loans issued to businesses of this size in the UK. 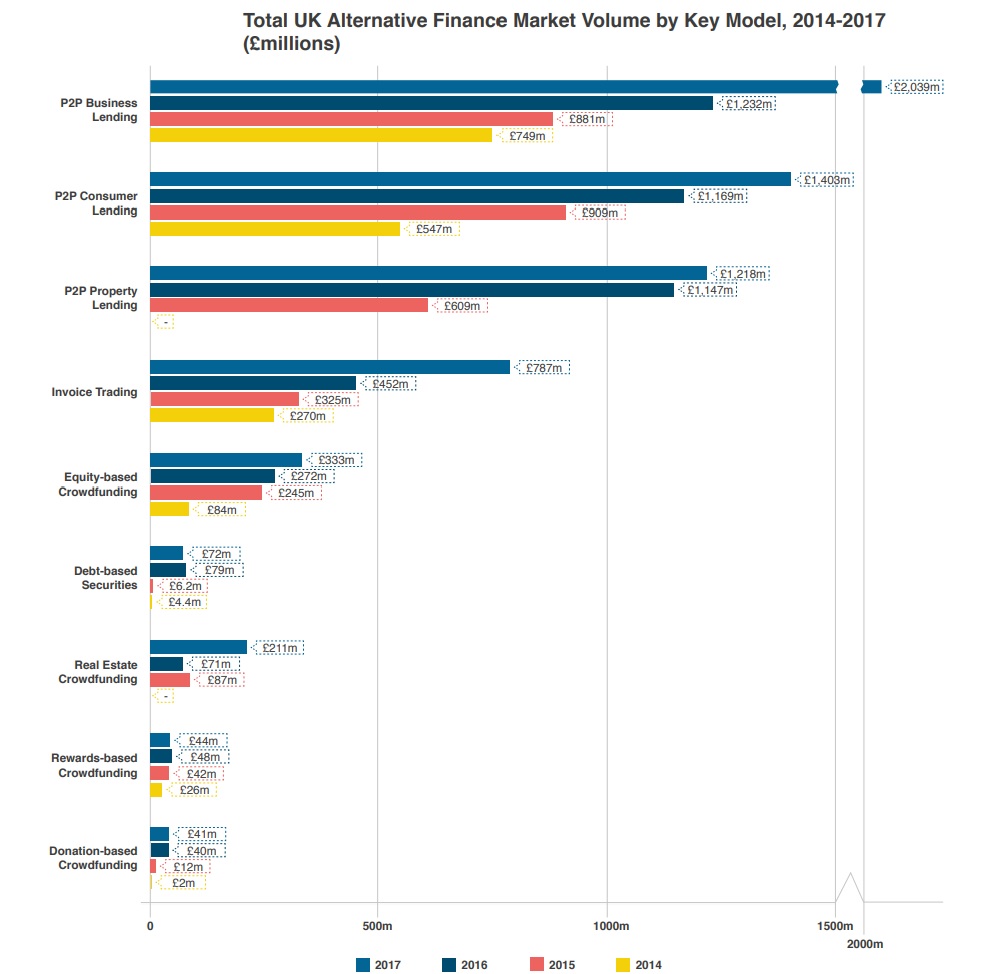 On the equity side, crowdfunding volumes remained steady in absolute terms and contributed 12.9% of all UK total seed and venture stage equity investment.

The sector’s share of overall UK equity funding fell, however, as a number of large venture capital deals completed in 2017 boosted the share of traditional VC funding.

2017 saw further increases in the institutionalisation of funding across alternative finance models. On the debt side, 40% of the funding for P2P Business Lending was provided by institutional lenders including mutual funds, pension funds, asset managers, banks, family offices and other 8 financial institutions.

This highlights the growing institutionalisation of this funding model, which is up considerably from the 28% in 2016 and 26% back in 2015. Institutional funding accounted for 39% of the funding in P2P Consumer Lending, up from 32% in 2016.

The survey was largely conducted before the FCA released its latest regulatory review findings – hence, it reflects perceptions during the first half of 2018. During that time, the UK online alternative finance industry’s perception towards regulations remained largely positive, with 83% of both loan-based and investment-based platforms regarding the existing UK regulations as being adequate and appropriate.

This contrasts with 17% of the surveyed investment-based platforms that responded which felt that regulations were excessive and strict, up 10% from 2016. Across the whole UK alternative finance industry, concerns over risks have broadly increased. 42% of the surveyed platforms rated the risk of fraud as either very high or high, up from 29% in 2016. 35% of the platforms regarded the risk of a notable increase in default rates as either very high or high, compared to the 17% recorded in 2016.

On the regulatory front, the significant changes proposed by the FCA in mid2018 will have come as a surprise to many platforms. Only 33% of the surveyed platforms rated the risk of regulatory changes as either very high or high, whilst the figure was 25% in 2016.