ACH volume grew to almost 23 billion electronic payments, an increase of almost 5%, or 1 billion transactions, over 2013 volume, according to new statistics released by NACHA — The Electronic Payments Association.

A total of more than $40 trillion was transferred over the ACH Network last year,

“The ACH Network has continually added capabilities over  its history to enable a host of electronic payments, such as payroll, bill payments, business payments, online and mobile payments, international payments, and a variety of others,” said Janet O. Estep, president and CEO of NACHA. “New initiatives will help us continue to provide new, efficient options for ACH Network users.”

Reflecting the industry’s continued adoption and use of electronic payments, native 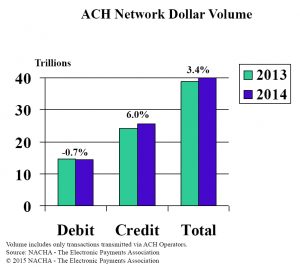 WEB transactions — debit or credit payments made when authorization is provided via the Internet or a wireless network — grew 10.2% in 2014. A total of 3.6 billion WEB transactions were exchanged via the Network last year, including 7.4 million WEB credits that were person-to-person (P2P) payments. The implementation of new rules in March 2014 enabled the use of the WEB credit to identify and standardize P2P payments processed via the ACH Network. In total, WEB transactions accounted for almost 20% of ACH Network volume.

“Clearly, the trend is moving towards more and more online and mobile payments, as these types of payments, like the ACH Network, provide choice, flexibility and convenience for consumers,” said Estep. “Continued development and implementation of rules that support the changing needs of the industry will help ensure financial institutions remain at the center of payments and continue to meet the needs of today’s and tomorrow’s consumers.”

In 2014, the ACH Network processed a total of 2.7 billion CTX and CCD transactions, including 149 million healthcare payments via ACH, which are CCD transactions.  This was an increase of 7.3% over 2013. Addenda record use associated with B2B payments grew as well, with CTX and CCD addenda use collectively increasing 7.7%.

Recurring payments, or PPD transactions, which account for almost half of total ACH Network volume, grew by 4.4% in 2014. Direct Deposit via ACH, or PPD credits, increased 3.6% over 2013.

To help maintain ACH Network quality, NACHA employs a comprehensive risk management strategy, which enables new opportunities and applications to thrive, while ensuring the safety, security and integrity of ACH payments. NACHA also utilizes the National System of Fines, which provides the means for evaluating possible Rules violations. Through a formal system of warnings and fines, it corrects infractions and helps ACH Network participants remain within the Rules’ boundaries. In 2014, NACHA assessed fines in 148 cases in the amount of $369,000. Through the National System of Fines and other risk management initiatives, including Rules development and implementation, the overall Network unauthorized debit return rate was a very low 0.028% in 2014 (i.e., less than 3 out of every 10,000 transactions).

“The ACH Network remains a safe, secure, and high-quality payments system,” said Estep. “The implementation of new rules, such as new standards and controls on resubmitting returned payments, and assessing fees on unauthorized transactions, will help further improve the quality of ACH payments and strengthen the Network overall.”