The worldwide ATM installed base grew 7% in 2014, to reach three million units, according to RBR’s newly published Global ATM Market and Forecasts to 2020 report. This comes just five years after the two million mark was passed, and RBR forecasts that the four million mark will be passed by 2020. 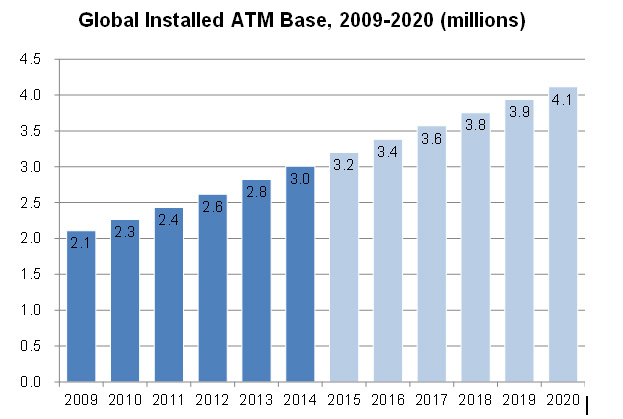 China and India are leading the charge

Driven by strong economic growth, increasing disposable income and huge numbers of people entering the banking system, China’s ATM installed base has almost tripled in size since 2009. Having surpassed the USA in 2013, China is forecast to pull further ahead of the rest of the world over the next few years, as banks deploy ATMs to meet customer demand in branches.

The new study shows that India has also seen rapid growth over the last decade, and by the end of 2014 it was the fourth largest ATM market worldwide, behind only China, the USA and Japan. By 2020, growth from both banks and IADs is expected to have pushed India’s installed base to roughly the same size as that of the USA, with only China forecast to be larger. There are currently a huge number of rural communities in India without access to electronic banking facilities, but this is slowly changing, and continued growth in the banked population will be a major driver of further ATM deployment.

The Middle East and Africa (MEA) will grow almost as rapidly as Asia-Pacific – Iran and Nigeria will add the largest numbers of new ATMs outside Asia-Pacific, with increased levels of cardholding and ATM usage encouraging banks to expand into rural areas in both of these markets.

2014 marked only the second time the installed base of an entire region has contracted, as regional powerhouse Russia and several other countries in central and eastern Europe (CEE) saw their ATM numbers decline.

The Russian economy has taken a hit from falling oil prices, and has been impacted by western sanctions imposed after the annexation of Crimea from Ukraine in March 2014. Ongoing unrest has also had economic consequences for Ukraine, home to CEE’s second largest ATM installed base, which has seen an 18% decline in its number of ATMs over the past year.

Installed base in several mature ATM markets expected to contract

10 of the 17 major markets in western Europe witnessed falls in ATM numbers in 2014, with the biggest drop seen in Spain, where many banks continue to streamline their branch networks and ATM fleets in the wake of recent mergers in the financial sector. While in some markets these falls are temporary, RBR’s research suggests that the number of ATMs in six of these markets will continue to fall, for at least the next five years.

In other regions too, mature markets will see little, if any, growth. In Asia-Pacific, five countries will experience annual ATM growth of just 1% over the next few years, while Australia – the region’s second oldest ATM market after Japan – will see its installed base contract, as cash usage is challenged by contactless payments and non-cash ATM facilities face stiff competition from other delivery channels.

Growth in ATM numbers nevertheless expected in all regions

Despite the fall in ATM numbers in several mature markets, RBR forecasts that the overall number of ATMs will increase in all six world regions between now and 2020. Asia-Pacific and MEA will be the main engines of growth, while the other regions will witness more modest rates of expansion.

From young markets with large unbanked populations, to the most sophisticated where consumers can choose from an increasingly wide array of banking channels, the ATM remains a vital touchpoint between banks and their customers. Banks continue to rely on ATMs to expand their reach while managing infrastructure costs, and this, combined with a growing requirement for banking services, ensures demand for ATMs will remain strong for the foreseeable future.