The percentage of fraudulent transactions occurring outside the UK in 2014 on UK debit cards rose 25% in a massive sample of cards studied by analytic software firm FICO.

Cross border fraud transactions accounted for nearly a third (31%) of all fraudulent transactions on 52 million active UK debit cards studied, up from 23% in 2013. cross border transactions overall nearly doubled between the 2013 sample and 2014 sample. 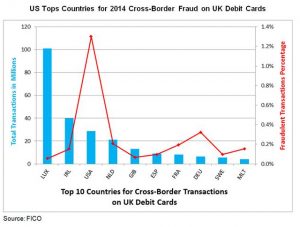 Warwick, FICO’s fraud chief in Europe, the Middle East and Africa. “The alarming rise in cross border fraud demands new technology, such as proximity location services that can identify whether the customer’s mobile is in the same place where the transaction is occurring. The UK reduced cross border card fraud from £230 million in 2008 down to £80 million in 2011. But cross border fraud has nearly doubled since then, and it’s time to get it back under control.”

“Lack of EMV technology in the US makes it a target for criminals,” said Warwick. “Criminal organizations are taking the details of compromised UK-issued debit cards and using those fraudulently in the US. This can affect anyone with a UK card that has been compromised, not just those who travel to the US.

“We are seeing a lot of fraud in the US as criminals try to exploit the lack of EMV protection before it is implemented in the US, and before the liability shift at the point of sale takes effect later this year. Having EMV will make the mag stripe data less appealing to criminals.”