New research by RBR shows that the number of payment cards in circulation worldwide increased by 11% in 2014 to reach 12 billion, largely driven by strong growth in Asia-Pacific and the Middle East and Africa. The migration away from cash and cheques helped boost worldwide card spend to $20 trillion, a 15% year-on-year growth. 78% of the 235 billion card payments in 2014 were made using an internationally branded card from Visa or MasterCard.

UnionPay’s growth is impressive, but its reliance on China is a double-edged sword

According to RBR figures, UnionPay is the world’s largest scheme with 4.8 billion cards in issue at the end of 2014, equating to 40% of the global card base – well ahead of both Visa and MasterCard with 23% and 18% respectively.

While UnionPay has been making headlines in recent years with its rapid growth, it remains a predominantly domestic scheme with a market share of just 0.2% outside of China, and is thus very exposed to changes in the country’s economic environment.

$6.7 trillion were spent on Visa branded cards in 2014, one third of global card expenditure 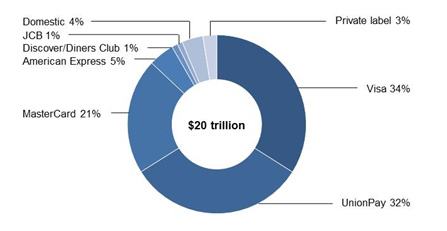 trillion card spend in 2014, ahead of UnionPay and MasterCard with 32% and 21% respectively. T&E schemes (American Express, JCB and Diners Club) make up 6% of card expenditure worldwide, much higher than their 2% share of the card base.

Domestic and private label cards account for a combined 6% of card spending, down from 7% in 2013, as such cards are increasingly being rebranded with international schemes.

RBR is forecasting the number of cards worldwide to increase from 12 billion in 2014 to 17 billion by the end of 2020, corresponding to a compound annual growth rate of 6%. 80% of this growth will come from the debit card sector and will be largely concentrated in emerging markets in Asia-Pacific and the Middle East and Africa, regions in which there are countries with large unbanked populations. 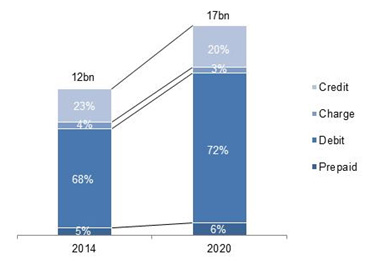 as their first card product, usually as part of a current account package. As the size of the banked population continues to grow, particularly in the less mature markets, the share of debit cards is forecast to increase from 68% in 2014 to 72% by the end of 2020.

Although prepaid cards saw the fastest growth of any card type in 2014, increasing in number by 17%, they still represent just 5% of the global total and their number has not risen as quickly as had been widely predicted at the beginning of the decade. The majority of prepaid cards worldwide are issued in the USA (which accounts for 45% of the total) and Iran (which accounts for 18%).

RBR expects the share of credit cards worldwide to fall from 23% in 2014 to 20% by the end of 2020. Several factors are impacting the sector. In some countries, including the USA, issuers have been tightening lines of credit. In South Africa a fear of hidden fees is causing the sector to contract and in Ukraine the unstable economy and rising interest rates are having a similar effect. In the European Union, issuers are expected to scale back credit card issuing as a result of the cap on interchange fees due to come into force later this year.

Significant potential for further growth in cardholding and usage

Bearing in mind the uncertain global economic environment, the card sector has continued to perform strongly. Compared to 2010 when there were 7.9 billion cards in circulation worldwide, it is notable that the market has grown by more than 50%. The wide variation by region in card penetration and usage, together with the fact that in several countries consumers continue to be encouraged to move away from cash, in particular for low-value payments, indicate potential for further growth, most significantly in less mature countries.