Javelin Strategy & Research have published its 2015 Identity Fraud Study. 2014 was a mixed year in the fight against identity fraud, with some advances and some setbacks.

The study found that fraudsters stole $16 billion from 12.7 million US consumers last year. With a new identity fraud victim every two seconds, there is still significant risk to consumers, particularly students. Encouragingly, new account fraud – when someone opens an account in your name that you are not aware of – hit a record low in 2014, but continues to be one on the most damaging types of fraud.

Data breaches were a big headline in 2014, and they had a significant impact on identity fraud. The study found that two-thirds of identity fraud victims in 2014 had previously received a data breach notification in the same year, with many indicating their wariness about shopping at merchants, including big box retailers. 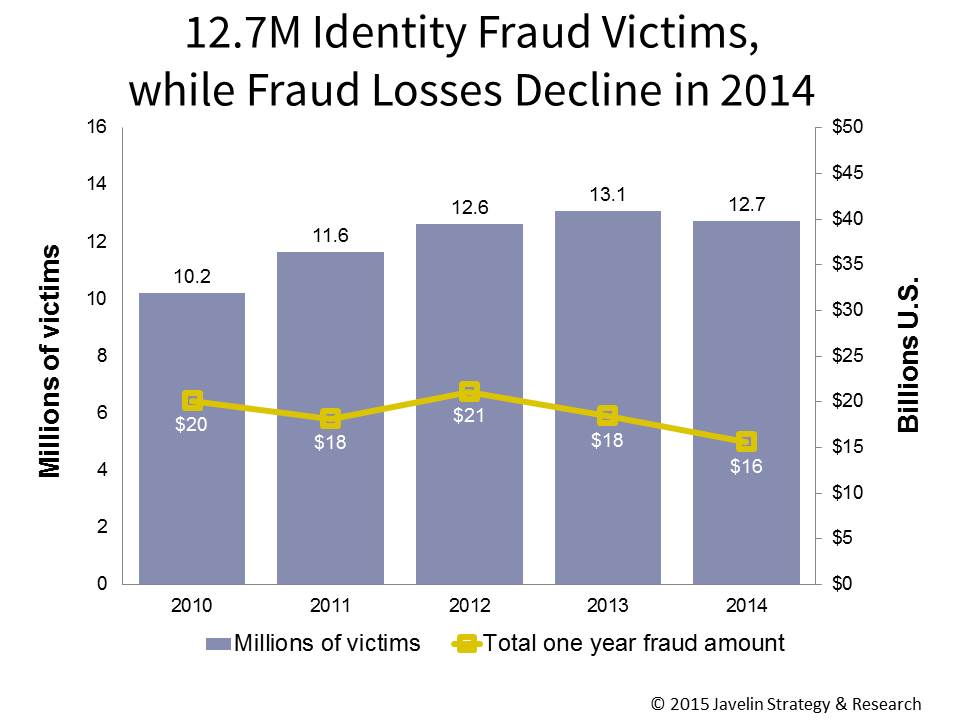 The annual 2015 Identity Fraud Study is a comprehensive analysis of identity fraud trends, now in its twelfth consecutive year, it is the nation’s longest-running study of identity fraud, with 58,800 respondents surveyed since 2003.

Identity fraud is defined as the unauthorized use of another person’s personal information to achieve illicit financial gain. Identity fraud can range from simply using a stolen payment card account, to making a fraudulent purchase, to taking control of existing accounts or opening new accounts. The 2015 Identity Fraud Study found several significant trends, including:

“Despite the headlines, the occurrence of identity fraud hasn’t changed much over the past year, and it is still a significant problem,” said Al Pascual, director of fraud & security, Javelin Strategy & Research. “Consumers, financial institutions and retailers are all taking aggressive steps, yet we must remain vigilant. The criminals will continue to find new ways to commit fraud, so taking advantage of available technology and services to protect against, detect and resolve identity fraud is a must for all individuals and corporations.”

In October 2014, Javelin Strategy & Research conducted an address-based survey of 5,000 US consumers to assess the impact of fraud, uncover where fraudsters are making progress, explore consumers’ actions and behaviors, and identify segments of consumers most affected by fraud.

Javelin Strategy & Research recommends that consumers work in partnership with institutions to help minimize their risk and impact of identity fraud. Following is a six step approach for consumers to follow:

To learn more about how consumers can protect themselves, visit LifeLock’s blog.

To report incidents of suspected fraud or identity theft, visit the FTC online .

To learn how to create more secure passwords, watch this video.