The number of payment cards globally reached 14 billion in 2016 and is predicted to rise to 17 billion by 2022, driven by further debit card issuance as the banked population increases.

In the recently published Global Payment Cards Data and Forecasts to 2022 study, it reveals that the number of payment cards worldwide increased by 8% to 14 billion in 2016. This is forecast to rise by 22% to 17 billion by 2022, driven by an increase in bank account holding in large but developing markets such as China and India. In China it is common for consumers to hold multiple cards for different purposes and this will also drive growth here. 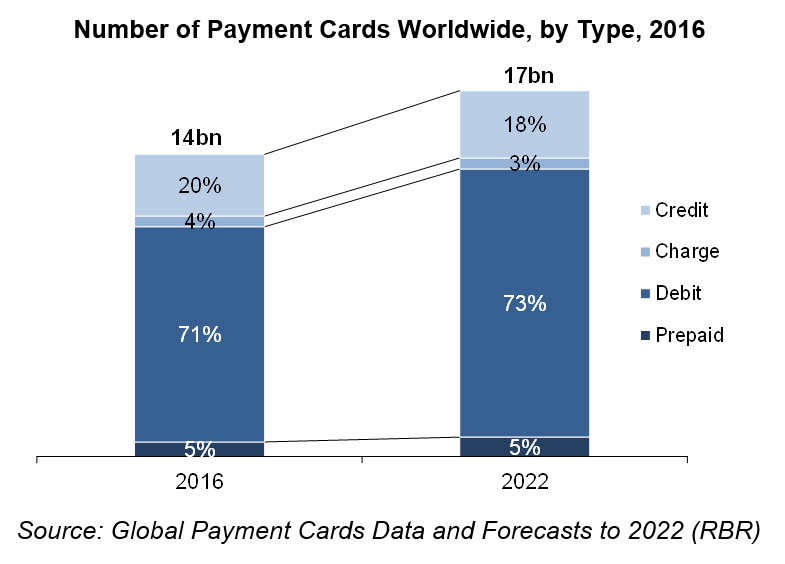 According to the study, debit cards are by far the most common card type, making up 71% of the worldwide total, up from 70% in 2015. This share will rise further, mainly as a result of financial inclusion initiatives in developing markets in Asia-Pacific, the Middle East and Africa and Latin America.

In Pakistan, for example, only 13% of adults hold a bank account and a debit card will normally be the first card they will receive when they enter the banking system. In more developed markets, growth in the number of debit cards is partly a result of issuers targeting younger customers. In the UK, for example, issuers are offering debit cards to children as young as 11 years old.

The research shows that the share of prepaid cards remained static in 2016, the expansion of this sector in some countries being offset by a decline in others. In Vietnam, prepaid cards are gaining popularity as gift and travel cards, as they carry low risk for issuers. In Russia, in contrast, some prepaid cards are being replaced by alternatives such as debit cards and e-wallets. Russian regulations limit the amount held on prepaid accounts and prohibit their use for cash withdrawals, restricting the cards’ appeal.

The study shows that credit cards’ share fell by two percentage points to 20% in 2016 and is set to continue to decline. In the EU, this is partly due to the interchange fee caps, which limit the profitability for card issuers, and have led to a fall in the number of such cards in some countries (e.g. Czechia). In the UK, meanwhile, banks are adopting a more cautious approach to lending following a rising number of defaults on credit card bills in early 2017. The tightening of credit scoring and stricter borrowing terms have also brought about a contraction of the South African credit card sector.

Nevertheless, other markets have been identified where credit cards are faring much better. In India, for example, confidence has returned, as issuers have better procedures, including access to a central credit bureau, allowing improved vetting of prospective cardholders. Meanwhile, the Canadian government has policies in place to attract new immigrants and banks are creating new credit products for this segment.