After years of low inflation making the exports of some euro members uncompetitive, inflation in the eurozone finally hit the ECB’s (European Central Bank) 2% target in 2018.

Despite some tense times, for instance, when the new Italian government looked as if it might nominate a finance minister who wanted Italy to leave the eurozone, there have been no serious populist upsets to the economic system.

In his state of union address to the European Parliament, on 12 September 2018, President of the European Commission Jean-Claude Juncker promised to use the remainder of his time in office to prove to the people of Europe that the EU could deliver on the promises it had made for them: of greater prosperity, security, and freedom.

Economic indicators are mixed. The political emphasis on optimism notwithstanding, consumer confidence in the eurozone fell in the four months leading up to September. In September, the Economic Sentiment Indicator measuring business and consumer confidence — hit by fears over global trade disagreements — fell from 111.6 points to 110.9 points. However, unemployment fell to 8.1% in August, the lowest rate since the financial crisis. 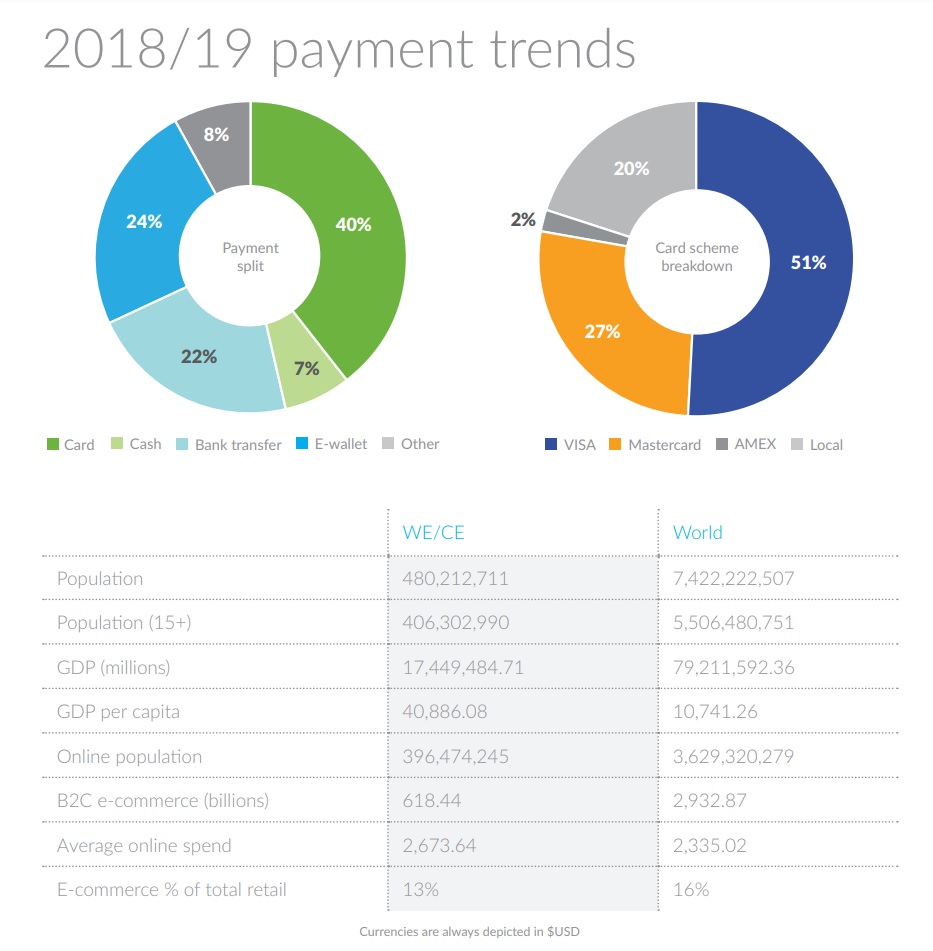 According to the Ecommerce Foundation, the value of goods sold online in Europe in 2017 was €534 billion and was expected to reach €602 billion by the end of 2018. Analysts expect more and more Western Europeans to start looking online for bargains, rather than on the high street.

PPRO’s latest research shows that e-commerce accounts for 13.4% of all retail in Western and Central Europe. The EU is currently in the process of finalising its Revised Payment Services Directive (PSD2). This will make it easier for bank customers to shop around for financial services, including payment services for e-commerce.

PSD2 was finalised and incorporated into national law on 18 January 2018. What the final draft will look like and how it’s implemented will have a profound impact on how payment service providers and e-commerce companies do their business.

The outlook outside the Eurozone

The Western and Central European nations outside the Eurozone are the Czech Republic, Denmark, Hungary, Norway, Poland, Sweden, Switzerland, and the UK. The Nordic economies are ticking along nicely, albeit not quite at their previous pace.

Hungary’s economy is projected to grow by 4.4% this year. This is despite the Orban government’s continuing tense relationship with Brussels.

In September, analysts at FTSE Russell announced that they would now class Poland as a mature rather than an emerging market. The country’s economy was projected to grow by 4.6% in 2018.

The exit negotiations with the United Kingdom drag on, frequently bogged down by, what appears to be, miscommunication and mismatched expectations on both sides. Continuing uncertainty over the future of the UK’s relationship with the EU is acting as a drag on the British economy.

A 2018 study by the KOF Swiss Economic Institute predicted that the number of full-time jobs would expand by 2% in 2019 while the relatively weak franc gives a boost to exporters.

Overall, the economic outlook in Western Europe is healthy. And according to Eurocommerce Europe, 38% of all online shoppers in Europe are already shopping crossborder, indicating a high level of acceptance for new, innovative, and high-value online retailers and retail experiences.