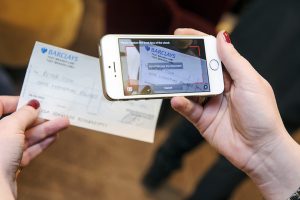 It’s the first lawsuit USAA has filed since it warned last year that it would be reaching out to banks and credit unions to “pay their fair share” by licensing the company’s RDC patented technology that allows customers to deposit cheques remotely using mobile devices.

USAA is seeking unspecified financial damages from Wells Fargo in the suit filed Thursday in US District Court in Marshall. “Wells Fargo is one of the biggest adopters of remote deposit capture,” said Nathan McKinley, USAA’s head of Corporate Development, which includes commercialisation of the company’s intellectual property. “We believe they are leveraging the technology to improve their bottom line, and they failed to take a license.”
More than 21 million Wells Fargo customers use mobile banking, USAA says in its lawsuit. Wells Fargo spokeswoman Tymika Morrison said the company does not comment on pending litigation.

The lawsuit states it’s “improper for Wells Fargo to use, without permission, RDC patented technologies that USAA has spent immense resources to invent, develop, implement and perfect.”

McKinley wouldn’t say why USAA chose to pursue litigation against Wells Fargo, the third-largest US bank with almost $2 trillion in assets at the end of last year.

“It doesn’t do much good to sue a smaller institution if you’re trying to make sure you’re making a stand for your product,” comments Jim Marous, co-publisher of The Financial Brand. “If you’re going to put a monetary amount toward the damages, you’re going to pick a large institution.”

It was reported last year that USAA had sent out hundreds of letters to financial institutions seeking licensing fees for its intellectual property. McKinley declined to say how many institutions may be using USAA’s technology. He also wouldn’t say how many have agreed to license the technology or have refused to do so.

USAA has 50 patents relating to depositing cheques electronically, but only four are part of the lawsuit, McKinley said. USAA says it approached Wells Fargo in August to engage in “good faith negotiations,” but Wells Fargo never obtained a license to use the patents.

Mobile deposit has been quickly adopted by consumers as more people use mobile apps and websites to conduct financial transactions. About 87 million US consumers now use the technology.