A Juniper Research report predicts that by 2023 there will be 8 billion devices with voice assistants in them, up from 2.5 billion at the end of 2018, and that a massive $80 billion voice commerce market will grow out of this trend.

This new voice commerce market will consist of sales made through a voice assistant, including physical goods and digital sales, but will mainly comprise digital goods (such as apps and digital content).

The vice president of Amazon Pay believes consumers paying for goods with the sound of their voice will revolutionise the commerce industry.

“It is akin to what happened with mobile maybe 10 years ago or even with e-commerce 20 years ago.”

Smart speakers — such as Amazon’s Echo, Google Home and Apple’s HomePod — are the fastest growing consumer technology since the smartphone, according to research firm eMarekter.

It comes at a time when artificial intelligence is disrupting every industry, leading to new business models, further digital transformation and a future of technology that’s more integrated into our natural environment. 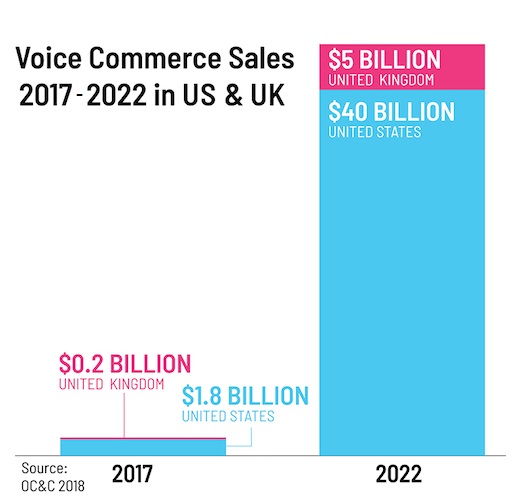 Last year, strategy consultants OC&C predicted that the growing popularity of smart speakers would lead to an explosion in voice commerce. The international consulting firm predicted the industry would grow to $40 billion-plus in 2022, up from about $2 billion across the US and UK.

Some expect even faster growth rates for voice payment services. In February, Juniper forecast that voice commerce would rise to $80 billion in 2023.

Gautheir also says Amazon Pay’s latest research found that roughly 40% of consumers think smart assistants would be used in some part of their shopping journey over the next three years. The data recognises that consumers could use their voice at any point on the path to purchase, not just for the transaction itself.

Amazon Pay said over 10,000 consumers in the US, UK, Germany, France, Italy, Spain, India and Japan were contacted in the double-blind survey.

The e-commerce giant said the online survey, which was carried out in April 2019, showed business “should not just consider ‘voice’ but embrace it in anticipation of the next level of consumer expectation.”

“The potential is phenomenal,” Gauthier said. “Just like mobile 10 years ago, there is a lot we need to learn. There is lot we need to understand about what are the right use cases because trying to do with a smart assistant what already works well in a mobile would be really a waste of everybody’s time.”

Almost half of all the consumers surveyed by Amazon Pay said the safety of their personal and financial information was their most pressing concern, while 34% of respondents said they would not trust voice services to accurately select the product they needed.