US readiness for EMV at a low point

With a crucial deadline looming in 2015, the US payments industry will have only partially converted to the Europay-MasterCard-Visa (EMV) chip card standard by the end of that year. Indeed, it will likely take years to equip small merchants especially to accept EMV, according to a report released by Javelin Strategy & Research

Card issuers will lag significantly as well. They will have issued 166 million EMV credit 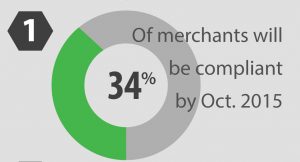 cards and 105 million EMV debit and prepaid cards by the end of 2015, but this will account for just 29% and 17% of the total cards in circulation by then, according to the Javelin forecast. Not until the end of 2018, fully three years later, will issuers achieve anything like full issuance, at 96% penetration for credit and 98% for debit and prepaid – writes John Stewart, Digital Transactions.

Both issuers and merchants face an October 2015 deadline from the major card networks to be prepared for EMV, a 20-year-old chip card standard already well established in the rest of the developed world. By that date, liability for counterfeit card fraud will shift to the party not equipped for EMV. Gas stations have until October 2017. 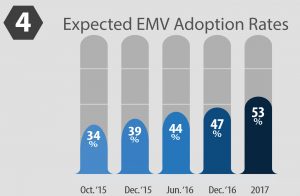 the end of next year will be sorely disappointed, according to the Javelin report. While more than half of merchant locations will be EMV-ready by the liability-shift date, no more than a quarter of stores with fewer than 20 employees will be, the report forecasts.

Part of the problem with small merchants is that many aren’t even aware of the deadline, let alone the time and cost involved in installing new point-of-sale gear and training staff, says Nick Holland, a senior analyst at Javelin and author of the report. “There’s going to be a long tail of smaller merchants. There’s going to be a great deal of unreadiness. There’s a liability shift happening and they just don’t know about it.”

US POS terminals by share (Source: The Strawhecker Group)

radically different from the swipe-and-go experience consumers are accustomed to with mag-stripe transactions. Chip cards require cardholders to insert, or “dip,” the card in a POS reader for a period of time. Consumer confusion is likely to slow down checkout lines, Holland warns.

He projects that most US EMV cards issued over the first few years will not include contactless capability, primarily because of cost. Each chip card will cost issuers $3.50 on average, or a cumulative total of more than $4.2 billion by the end of 2018. Adding contactless capability would swell that per-card cost by $1, Holland estimates. “It’s already a sizable cost for issuers to put out EMV cards at all,” he notes. “The delta between contact and contactless is significant.”

The hardware tab for merchants will total almost $2.6 billion by the end of 2018, Holland forecasts. This cost doesn’t include the toll for training, software, or maintenance.

Given the current state of unreadiness, the Javelin report recommends networks immediately launch programs to educate consumers and merchants about EMV. Merchants and issuers, meanwhile, should form EMV project teams to devise rollout strategies and budgets, including testing and deployment plans.

The post US readiness for EMV at a low point appeared first on Payments Cards & Mobile.