The Swedish central bank has announced a trial for an e-krona targeted at the general public. The solution is developed by Accenture using the Corda enterprise blockchain. The central bank was keen to emphasise that no decision has been made to proceed with a central bank digital currency (CBDC), and the project is intended as a learning experience.

Accenture won the contract to explore the e-krona in December last year. The initial test will last through to February 2021. In the document the banks states, “the recent sharp decrease in the use of cash in Sweden has made it more difficult to use cash in certain parts of Swedish society.

Cash as so far been the only possibility for the general public to hold and pay with central bank-issued money. The Riksbank sees potential problems with the marginalisation of cash and has therefore initiated a pilot project to develop a proposal for a technical solution for a central bank digital currency, an e-krona that can work as a complement to cash. 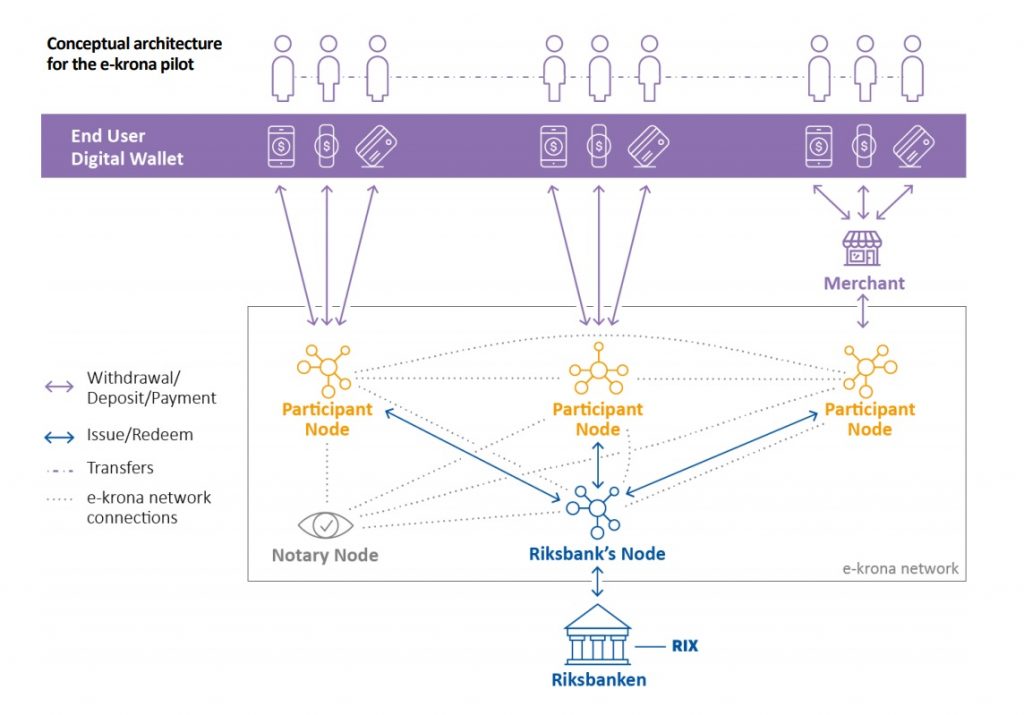 The aim of the project is to show in a test environment how an e-krona could be used by the general public. This technical solution will be based on Distributed Ledger technology (DLT), often referred to as block-chain technology. The main aim of the pilot is for the Riksbank to increase its knowledge of a central bank-issued digital krona. There is currently no decision on issuing an e-krona, how an e-krona might be designed or what technology might be used.

The precise role and the potential effects on the Swedish economy of an e-krona depend on how it is designed of course. Making an e-krona available to the general public is also ultimately a political decision. To be able to, at this stage, test how an e-krona might look and function, the Riksbank is running the pilot with Accenture to construct a technical platform for the e-krona.

The aim of the pilot is to create, in an isolated test environment, a digital krona that is simple and user-friendly and, at the same time, complies with critical requirements for security and performance. In the test environment, the test user shall be able to hold e-krona in a digital wallet.

From this digital wallet, it will be possible via a mobile app to make deposits and transfers as well as make and receive payments. The user shall also be able to make payments via wearables, such as smart watches, and cards. The technology shall be user-friendly and inclusive. E-kronor shall be available 24/7/365 and payments shall be instant. The pilot will also examine the possibility of building a technology in which the e-krona can be used offline.

The technical platform that forms the foundation of the e-krona solution is based on the company R3’s Corda DLT platform. Corda differs on a number of crucial points from cryptocurrencies, such as Bitcoin. For example, the e-krona’s DLT network will be private and only accessible for participants approved by the Riksbank.

Corda’s solution for verifying transactions is not as energy-consuming as Bitcoin either, but is instead more comparable with existing payment systems. Corda also provides a high degree of robustness and scalability as only a few nodes, and the notary node that is a supporting component to prevent double spending of tokens, are involved in each transaction.