Eurosmart has released the 2014 figures for the worldwide secure elements shipments and the smart secure contactless markets as well as the corresponding 2015 forecast. 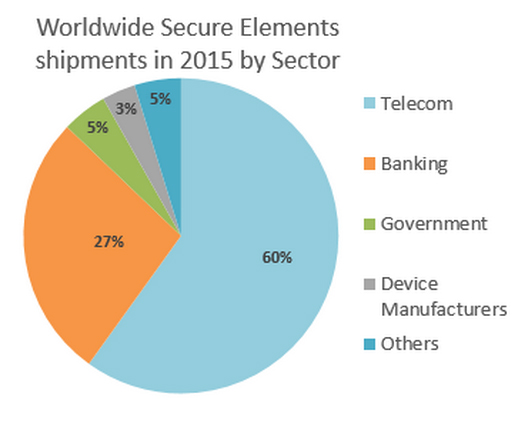 “The markets grew by over 12% in 2014, and we expect to see a similar growth in 2015 when the market should cross over the 9 billion devices mark”, said Timothée Mangenot, Eurosmart’s newly elected President.

“All figures are up from 2013, with financial services being the most notable growth drivers. The hyperconnected world, as also outlined in our vision paper, is fast becoming reality. Eurosmart has long been promoting trust as well as the protection of data and privacy as key issues for secure transactions in this hyperconnected world.

It is good to see the many initiatives and agendas that have been established to that effect in the European commission in the past year. We welcome especially the intergroup of the European Parliament that has been set up to work on the Digital Agenda for Europe.”

As evidenced by the European Digital Single Market Strategy released today, the European Commission will also put more efforts and launch new initiatives to build the necessary trust for the development of electronic services, to reinforce online privacy, and to ensure strong cyber security. “All of these topics have been addressed by Eurosmart for years. It is good to see them becoming a core issue at the European Commission,” Mangenot stated. 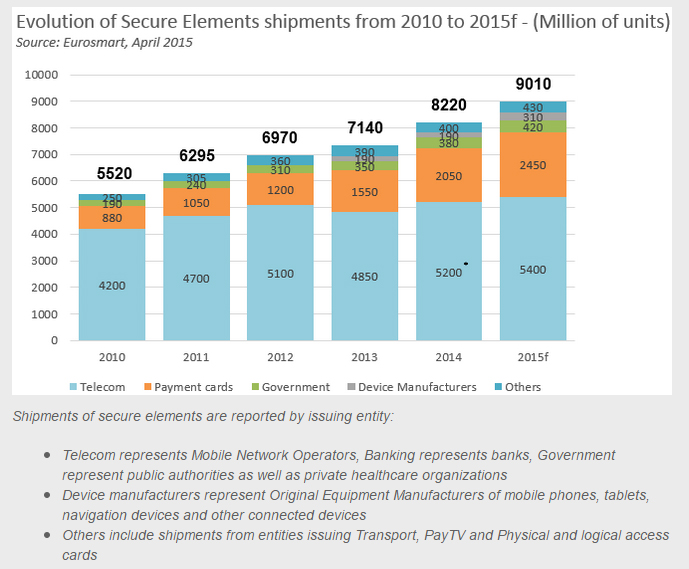 Growth drivers in the market

The continued migration to LTE networks drives the use of multiple connected devices – including smart phones and tablets, equipped with a secure SIM card – and allows the SIM card market to be back in full force, with 5.2 billion units shipped in 2014, as recently announced by the SIMalliance.

The increasing connectivity caused by the internet of things and machine-to-machine applications reinforces this trend. The announcement of Apply Pay boosted the NFC market to an all-time high with 350 million NFC secure elements shipped in 2014. “We expect the growth in NFC secure elements to continue”, said Mangenot. “This particular technology is finally taking off.”

The main growth driver for payment cards was and is once again the migration to EMV cards – cards equipped with a chip instead of a magnetic stripe only – Mangenot: “The Smart Security Industry has long recommended the switch from magnetic stripes to chip cards as it is empirically proven that there is a direct correlation between the use of a chip and the security of the card. Almost 70% of all payment cards shipped are now equipped with a chip.”

With regard to the traditional third growth driver, the digitalization of government services, Mangenot expects governments to speed up both their legislation and the implementation of the corresponding technologies: “Secure and convenient identification and authentication in mobile telecommunications, payment, identity, healthcare or transport are indispensable.

The Eurosmart president urged governments to establish standards for the secure electronic authentication and signature. “Citizens must be able to rely on the protection of their data and privacy. The Smart Security Industry offers products, solutions and services that enable governments to provide secure e-government transactions.”

The post Shipments of secure elements jump by over 12% in 2014 appeared first on Payments Cards & Mobile.