Safaricom has introduced new charges for the transfer of funds from customers’ bank accounts to third-party M-Pesa wallets – sealing a loophole that lenders have been using to by-pass Safaricom when sending money.

The telco said the Central Bank of Kenya (CBK) had approved the charges, effective on 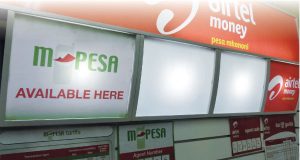 The announcement comes against the backdrop of a social media war between Safaricom and Equity Bank over fees charged on subscribers to Equitel, its telecommunications subsidiary.

The move comes at a time when banks are working on a mobile phone-based payment system called Real Time Interbank Switch.

The lenders are promoting it as “an interbank mechanism to enable inter-operability across Kenya Bankers Association (KBA) members for all retail payment streams.”

The bankers are marketing the system as a platform that “will be much cheaper” for their customers to transact compared to M-Pesa.

The KBA platform is also seeking to eliminate the need for banks to use M-Pesa in the business-to-consumer transactions and by extension bring competition in the mobile cash transfer sector and reduce the cost of sending money.

The KBA has said that while it costs Sh55 to send and Sh49 to withdraw Sh2,700 on M-Pesa, the bankers’ system will charge Sh20 for a similar transaction.

Safaricom has said that the intended charges for bank to M-Pesa transfers will be similar to those it currently charges on person to person transactions.

“We have written to our partner banks and financial institutions notifying them of these charges. This is a new service and not a revision of any existing charges,” said Stephen Chege, Safaricom Director for Corporate Affairs, in a statement.

He said delaying the effective date to December 1 “will allow banks and financial institutions ample time to communicate to their customers about the service.”

Safaricom has also alleged that the direct transactions from bank accounts to third party mobile wallets could be used to perpetuate fraudulent transfers and facilitate criminal activities such as funding terrorism.

“The current agreements cover the bank-to-M-Pesa functionality but do not include the bank-to-many functionality which the banks are now deploying. For that reason a new tariff had to be prepared and this is what has happened. This is not targeting banks or forcing them to use our M-Pesa service exclusively,’’ Safaricom said.