Research note: Consumer interest in the credit card is declining

Research from Deloitte has warned credit card issuers they need to do more to encourage credit card use if credit products are to have a long term future, especially with younger consumers. In common with recent studies from WorldPay and PCM’s own research, Deloitte also predict significant gains for digital payments at the expense of card products – although credit cards will be hit much harder than debit products, at least in the US. 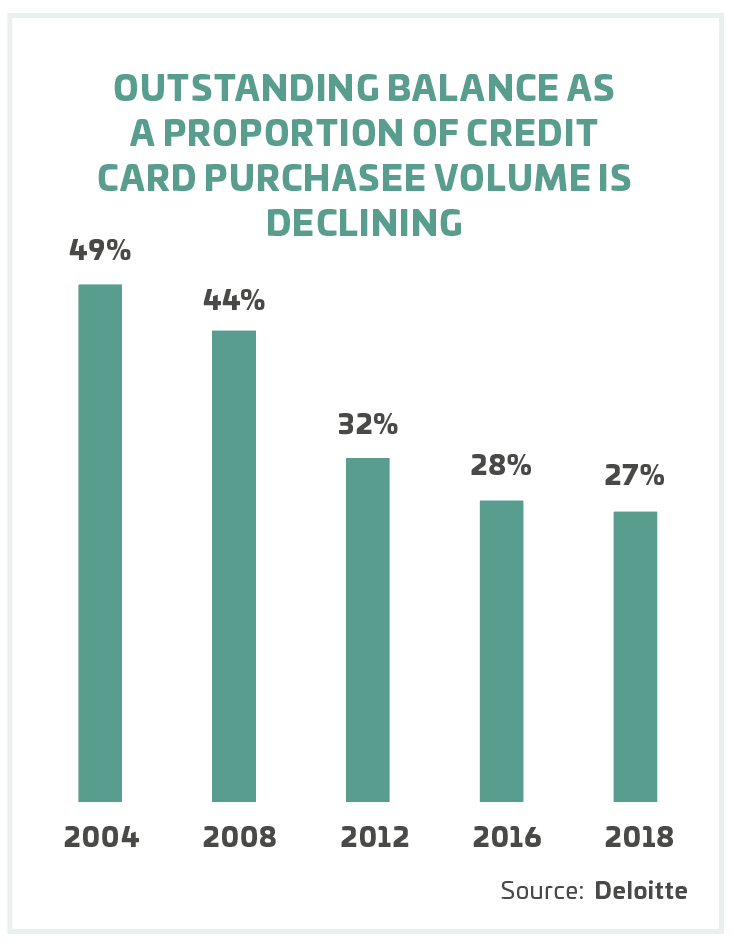 At first sight, the US credit market appears healthy, with the return on assets (ROA) for credit card issuers nearly double the average for US banks at 3.8%. What’s more, credit cards are the most widely-used instrument for online payments in the US, and accounted for $4 trillion in payments volume in 2018.

Finally, credit cards have also been the major beneficiary of the move away from cash in the US, accounting for almost all of the shift (6%) from cash to non-cash instruments between 2016 and 2018.

There may be trouble ahead…

However, Deloitte’s research argues that these positive headlines mask a longer-term decline in the industry’s prospects. For instance, ROA in the credit card business dropped by around 40% between 2011 and 2018 – in other words, credit cards are not as profitable as they used to be. This is due largely to the cost of the incentive and reward programmes banks have had to introduce to encourage customer credit card usage and loyalty.

The average cost to issuers of reward cards has risen by 30% in recent years. At the same time, consumer studies commissioned by Deloitte indicate that beneficial reward programmes are the key incentive for 75% of consumers when using credit products.

Meanwhile, in response to rising costs, banks are issuing fewer rewards-based credit products – resulting in a reduction of the overall attractiveness of credit cards to consumers. And younger consumers in particular are becoming more picky, with 34% of those in the 18-34 age bracket saying they plan to switch credit card provider in the next two years.

The decline in credit cards’ popularity is particularly concerning, Deloitte argue, because it comes at a time when consumers are experiencing lower rates of interest on their card balances than they have for years. Taken together, these facts ought to concern issuers about the long-term viability of credit products.

Another challenge for the sector is the fact that customers are increasingly choosing to pay off their balances in full each month, with the percentage of those “revolving” balances reducing from 49% of cardholders in 2004 to just 27% in 2018.

Finally, Deloitte’s study of the US credit card market notes the rapid advance of digital as a means of online payment. 2019 was something of a milestone for digital online payments as they surpassed credit cards by payments volume, reaching $4.1 trillion. Four out of five US consumers now use PayPal, Venmo or other solutions at least once a year for payments, and volumes using these methods are predicted to grow by 13% each year to 2023, far outstripping comparative volume growth on credit cards.