Most central banks are exploring central bank digital currency (CBDCs), and their work continues apace amid the Covid-19 pandemic.

As a whole, central banks are moving into more advanced stages of CBDC engagement, progressing from conceptual research to practical experimentation. Around the globe, interest in CBDCs continues to be shaped by local circumstances – according to Ready, steady, go? – Results of the third BIS survey on central bank digital currency.

A testament to these motives is the launch of a first “live” CBDC in the Bahamas. This front-runner is likely to be joined by others: central banks collectively representing a fifth of the world’s population are likely to issue a general purpose CBDC in the next three years.

However, the majority of central banks remains unlikely to issue CBDC in the foreseeable future. 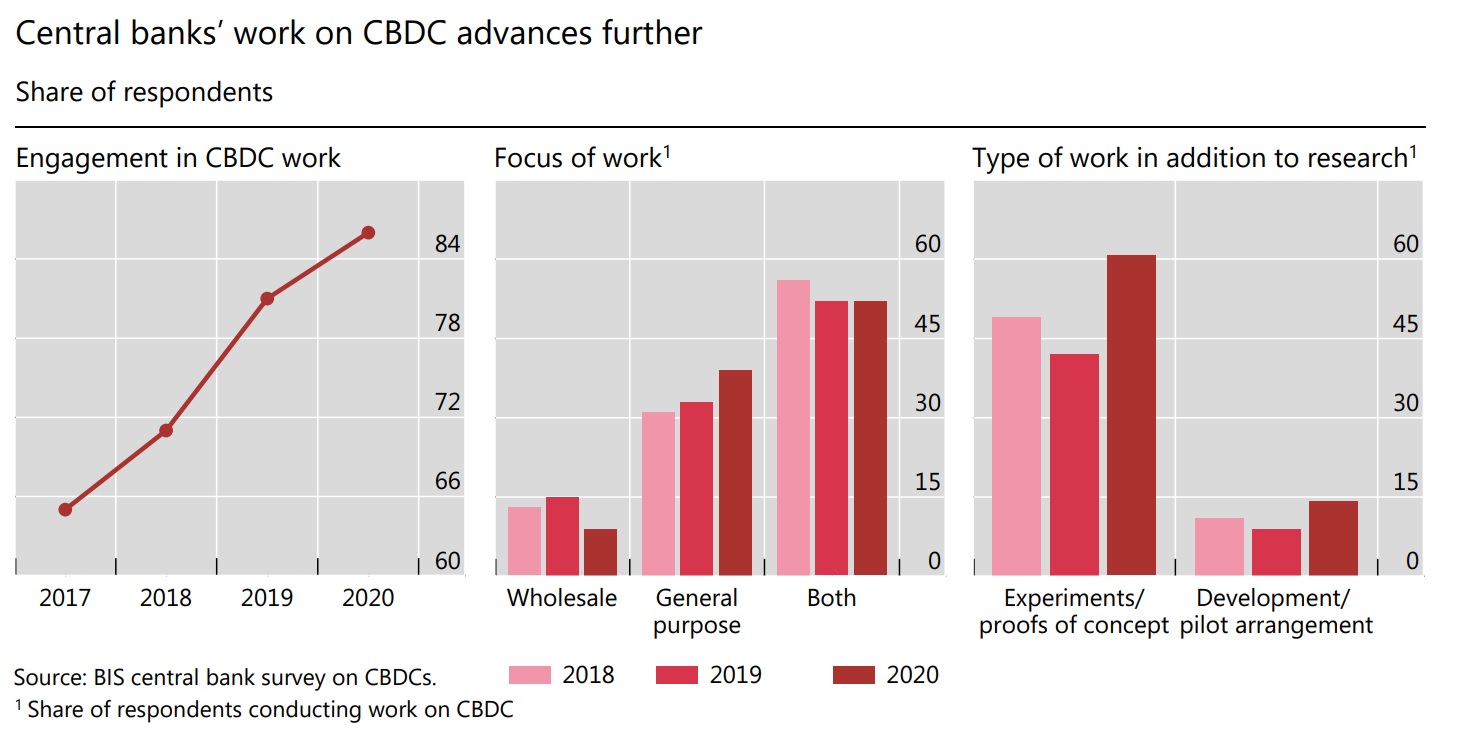 The third BIS report on central bank digital currency presents the results of a survey carried out among more than 60 central banks in late 2020 about their engagement in CBDC work, their motivations and their intentions regarding CBDC issuance.

Central banks also provided their views on legal frameworks for CBDCs and their assessment of the use of cryptocurrencies and stablecoins in their jurisdictions.

During the course of 2020, work on CBDCs continued apace amid the Covid-19 pandemic. The vast majority of central banks in the survey – 86% – are now exploring the benefits and drawbacks of CBDCs.

In recent months, major central banks have published a multitude of in-depth assessments of related policy issues and tested a variety of designs. 2020 also marked the arrival of a “live” general purpose CBDC when the Bahamas launched its Sand Dollar for its residents on 20 October 2020.

That said, a broader roll-out of CBDC is still impending. Some central banks with advanced CBDC projects are becoming more cautious about issuance timeframes while assessing their work.

Meanwhile, a growing awareness of the cross-border implications that CBDCs can have for the financial system has spurred international collaboration between central banks to find common ground on policy.

Over the last four years, the share of central banks actively engaging in some form of CBDC work grew by about one third and now stands at 86%. The survey data show that work related to retail CBDCs is gaining in relative popularity, with more central banks either looking at both wholesale and retail or narrowing their scope of work down to retail only (centre panel).

The central banks not currently involved in any CBDC work are primarily in smaller jurisdictions. This finding is consistent with the results of the previous two surveys.

Research also suggests that CBDCs are more likely to be under research and development in jurisdictions with high mobile phone use, innovation capacity and internet search interest for CBDCs, albeit with some differences across retail and wholesale CBDCs.

Central banks are moving into more advanced stages of CBDC engagement, progressing from conceptual research to experimentation. About 60% of central banks (up from 42% in 2019) are conducting experiments or proofs-of-concept, while 14% are moving forward to development and pilot arrangements.

Not surprisingly, these general trends encompass large differences across jurisdictions and types of economies.

Also, stepping up CBDC work does not prejudice the policy decision of whether or not to actually launch a CBDC, but it does demonstrate a strong interest.