The Payments Survey is an annual publication of the BRC (British Retail Consortium) measuring the sales volumes and values of different payment channels employed by retailers across the UK.

Conducted by the BRC for over twenty years, the Survey utilises an exclusive set of data from retailers to assess the changing approaches in the ways that customers choose to pay for goods.

It also provides a unique look at the cost of collection across different payment channels and provides a valuable benchmarking tool. 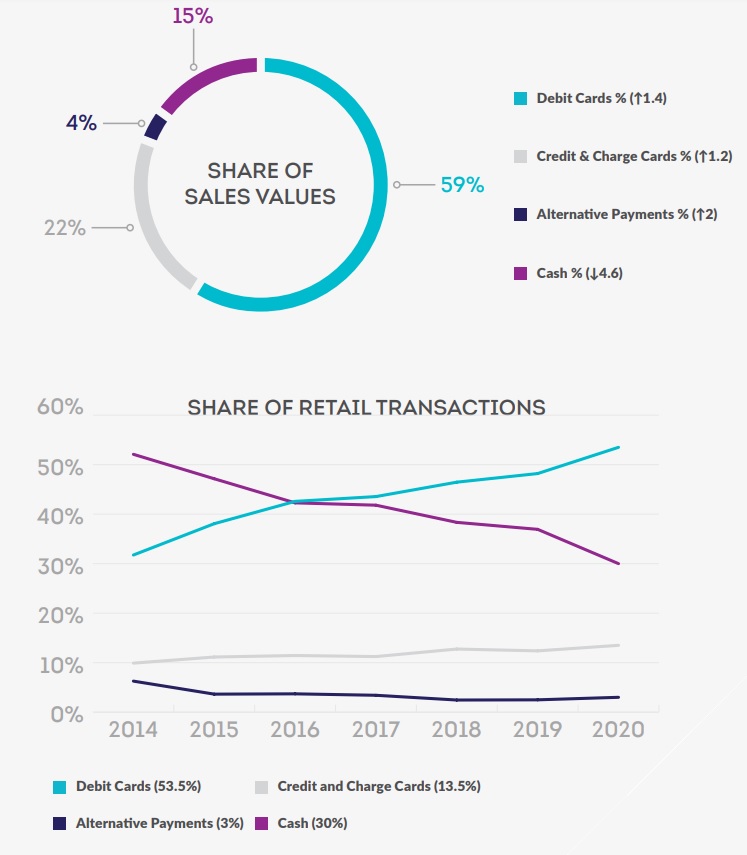 Physical non-food stores for example, including all ‘non-essential’ retail, saw sales drop by a quarter compared with 2019. Much of the growth is due to food and a large substitution of spending from the hospitality sector to retail.

Other areas of retail have also gained such as those selling DIY or electrical goods such as laptops and other devices as more of us have adapted to home working or home schooling.

Across our sample, representing 46% of the industry, we reported 7.7 billion retail transactions.

Extrapolated for the entire retail industry, this implies 16.7 billion retail transactions overall in 2020, down from 19.1 billion implied transactions in 2019.

The sizable fall in transaction numbers can be explained by a shift in consumer behaviour during the pandemic where major restrictions to our freedom of movement have resulted in fewer trips to shops.

The majority of this was accounted for by debit cards which, as a single category, exceeded more than half (54%) of all retail transactions by volume in the UK for the first time in 2020 (2019: 48%).

By another measure, the average transaction cost of any given payment jumped from 8.28 pence to 9.41 pence in 2020, suggesting an overall cost to retailers of £1.6 billion across 16.7 billion implied transactions.

Either way the cost for retailers to process customers payments is up significantly in 2020, from costs of £1.1 billion recorded for 2019. 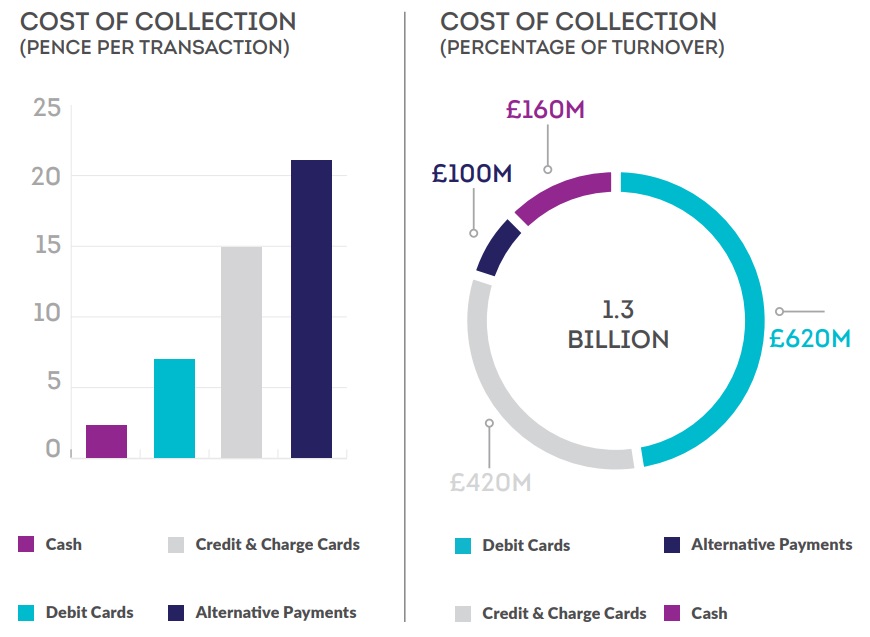 Measured by pence per transaction, cash remains the most cost-effective payment acceptance channel for retailers, however the cost of an average cash transaction jumped significantly from 1.4 pence in 2019 to 2.4 pence in 2020.

Alternative payments are the most expensive to process at 21.8 pence however, unlike the other categories, “alternative payments” include several channels so it is important to note that this is an amalgamation of cost figures not reflecting a single payment method.

Measured as a percentage of turnover, the average transaction cost of cash increased significantly here too, from 0.11% in 2019 to 0.27% in 2020, implying £160 million in cash processing costs for retailers in 2020.

At 0.62% of turnover, alternative payments were again the most expensive to retailers with costs totalling £100 million over half a billion implied transactions.

What the BRC want

With the UK’s reliance on card payments deepened by the pandemic, action must be taken to protect businesses and consumers from anti-competitive pricing in Europe’s largest card market.