PayPal announced that it now has more than 250 million active customers using its payment services. It has taken the firm just over 18 months to get to that goal since it announced that it had passed 200 million users in February last year. 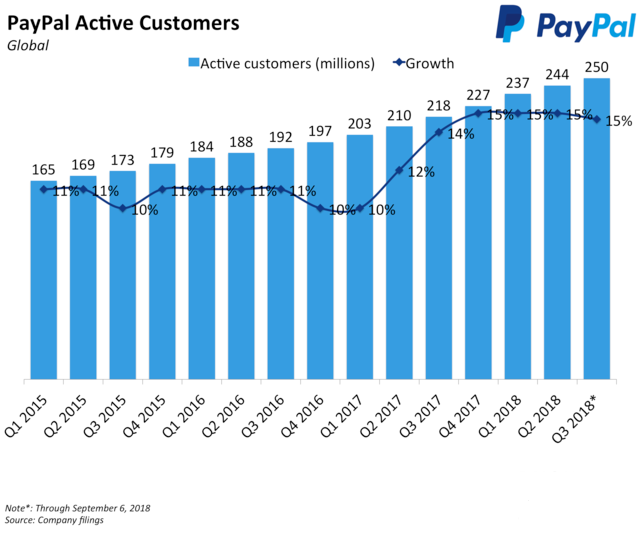 The company said that the growth in users meant that around 3 million people were joining the service every month. To illustrate the importance of the 250 million mark, Dan Schulman, CEO, PayPal pointed out that if PayPal was a country, it would be the fifth most populated, ahead of Brazil and just behind Indonesia.

“This is an important milestone for our company, and a key marker on our journey to fulfil PayPal’s potential,” Schulman wrote in a blog post. “On February 27, 2017, we announced that we had surpassed 200 million active accounts. The fact that we’ve added an additional 50 million accounts in a little more than 18 months – nearly 3 million accounts per month – is a testament to the tireless work you’ve done on behalf of our customers to add more and more value to our platform.”

“Like with everything else in our business, it’s not about the macro numbers, it’s about the individual experiences,” continued Schulman.

“The small businesses that support families and fuel communities. The single-parents managing for their families. The college students figuring out their budgets. The non-profits working to serve those in need.

The people and families and entrepreneurs who are new to digital finance and turn to us because they need a better way to borrow, to save, to spend, to share. The immigrants working hard to create a better life for their families and using our platform to send money back home.”

The strong growth at PayPal comes as the company is gearing up to engage in mergers and acquisitions. Back in July, in an interview with Germany’s Handelsblatt business newspaper, Schulman said the company has earmarked $3 billion for future deals.

“We have a healthy balance sheet and we are ready to put it to work to buy more companies,” the executive said at the time.  “I wouldn’t rule out that we take on a bigger deal if there’s a good fit for us.”