Mastercard recently won a patent to protect a method that would manage “fractional reserves of blockchain currency”, meaning consumers might one day be able to charge their purchases on their credit cards using bitcoin as a currency. 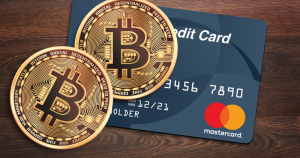 At present, Mastercard holders can only pay for things using currency that the government has declared as legal tender, Seth Eisen, Mastercard’s senior vice president for communications, said.

In the document, published with the U.S. Patent and Trademark Office, Mastercard said that there has been “increased usage” in blockchain currencies by consumers who “value anonymity and security.”

But there are disadvantages to using digital currency, the document noted, and there’s a need to improve the storage and processing capability of such transactions.

“While blockchain currencies can often provide such safety and security for the payer’s information, such security may be limited for payees, particularly due to the limitations of the blockchain,” the document said. For example, digital coin transactions still take longer: about 10 minutes for blockchain transactions versus nanoseconds for traditional payments.

As a result, both consumers and merchants have to wait a “significant amount of time” for these digital transactions to go through, or “rely on the payer’s good faith” that they are valid, said the document. It added that in the latter instances, the anonymity of the blockchain may leave those accepting payments at a disadvantage.

“Many entities, particularly merchants, retailers, service providers, and other purveyors of goods and services, may be wary of accepting blockchain currency for products and participating in blockchain transactions,” the document concluded.