CipherTrace released its Q4 2019 Cryptocurrency Anti-Money Laundering Report. Among key research findings in this fascinating report, it was discovered that cryptocurrency users, exchanges and investors suffered $4.5 billion in crypto-related losses resulting from thefts, hacks, and fraud. The lion’s share of those losses stem from the staggering growth of Ponzi schemes, exit scams, and misappropriation of funds crimes, the value of which rose 533% year over year. 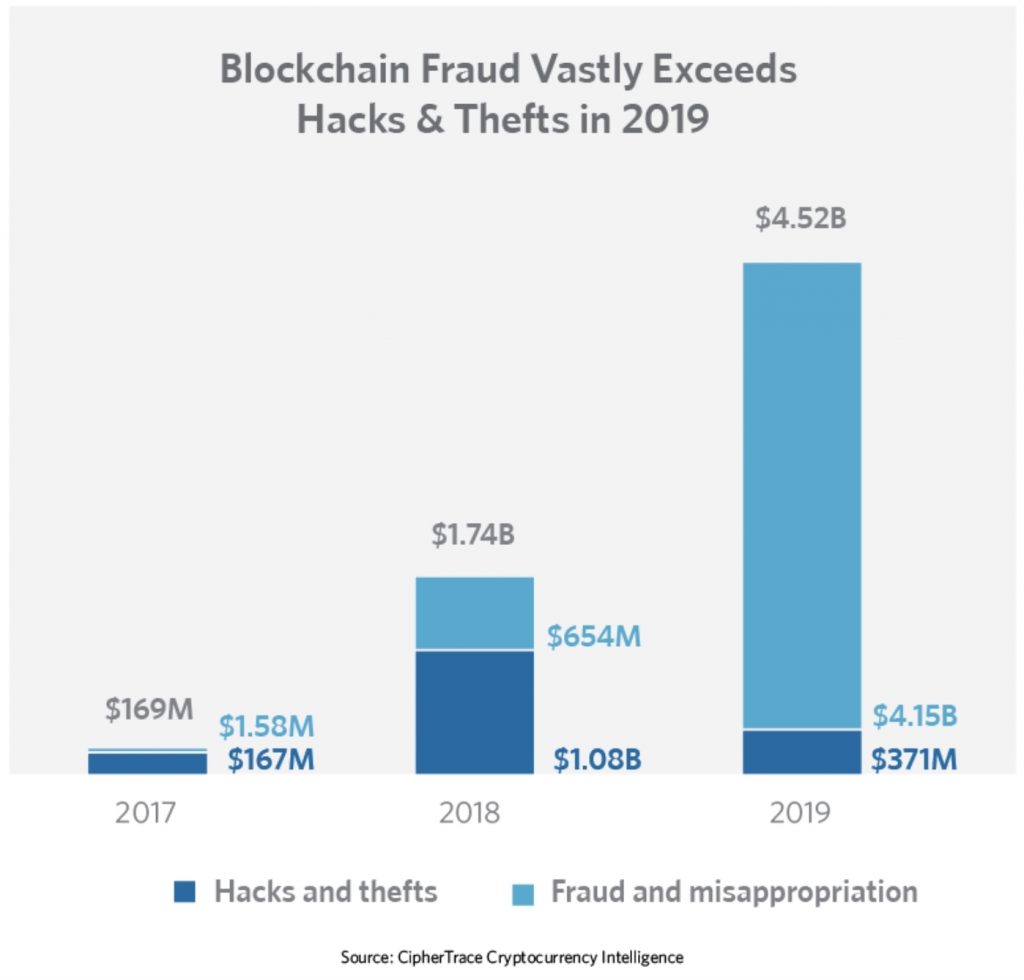 The research also revealed traditional financial services have become increasingly infused with crypto assets. For instance, results of an extensive analysis of the blockchain found almost all US banks harbour illicit virtual asset related money service businesses (MSBs), including cryptocurrency exchanges. Of additional concern for banks, 66% of dark market vendors sell stolen financial products and compromised accounts for cryptocurrency. And virtually all (97%) of ransomware attacks use bitcoin as the payment rail.

“Our research revealed some surprising trends in 2019,” says David Jevans, CEO of CipherTrace. “First, there was a dramatic shift away from outright thefts and exchange hacks and toward Ponzi schemes, exit scams, and other con games. Second, like them or not, banks have a lot more virtual assets lurking in their accounts and payment networks than most in the industry had previously thought. Banks need new capabilities to ferret out illicit MSBs, terrorist financing, and other major sources of risk.”

The report also provides an overview of regulatory moves throughout the world. This includes a comprehensive chart of anti-money laundering (AML) regulations by country, an update on the respective blockchain-related enforcement authority of the SEC, FinCEN, and the CFTC, and detailed reports on major regulatory and eCrime developments in various countries.

Trends in Theft, Fraud, Hacks and Misappropriation of Funds

Crypto criminals had a banner year in 2019. According to CipherTrace Labs, total cryptocurrency crime increased 160% from 2018. However, as the report suggests, if 2019 had a Person of the Year, it would have been The Malicious Insider. The culprits behind most of the losses were fraudsters operating inside everything from seemingly legitimate blockchain projects that were actually exit scams to crypto Ponzi and pyramid schemes. Ultimately, all that $4.5 billion worth of illicit cryptocurrency needs to be laundered.

“As crypto-assets become increasingly entangled in traditional financial services, AML and CTF compliance risks are on the rise,” says Stephen Ryan, COO of CipherTrace. “Virtual assets are now pervasive in bank accounts and payment networks, and banks must find ways to deal with the risks. Effectively mitigating cryptocurrency risks requires equipping compliance officers with the best tools and intelligence to gain visibility into this new asset class.”

The CipherTrace report also outlined a multi-year research project into darknet markets and other illicit vendors, which revealed that of dark market vendors:

The research also showed that bitcoin is the payment of choice for cyber extortionists. During the last year, they demanded BTC as payment in 97% of ransomware attacks. All of this extorted bitcoin will need to be laundered before criminals can use the funds.

2020 Will Be a Year of Intense Regulatory Changes

In its overview of 2019 regulation, CipherTrace chronicles many new rules from international financial authorities, as well as proposed guidelines currently under debate. The research team identified varying levels of maturity and sophistication in AML/CTF regimes around the globe. For instance, AMLD5 went into effect across the European Union early January regulating crypto-fiat exchanges for the first time in most EU countries.

Additionally, CipherTrace described urgency among its customers and industry players around pending FATF Travel Rule legislation. Exchanges and financial institutions in the G20 have less than six months to find a solution for dealing with this major compliance conundrum—how to comply with the requirement to share sender and receiver information before executing cryptocurrency transactions, while protecting confidentiality.

In the US, financial institutions including virtual asset service providers (VASPs) have been reminded by FinCEN that they must meet their funds Travel Rule obligations under the BSA or face enforcement actions.