Long Read: The Metaverse – Is it a fad or the future?

Facebook is so convinced the metaverse is the future, it’s changed its name. But is a fully-digital life possible, or even desirable?

James Wood, Payments Cards & Mobile Managing Editor peers into his crystal ball to figure out what the metaverse means, and what’s likely to happen next.

“Humankind”, wrote Douglas Adams in The Hitchhikers Guide to the Galaxy, “is a kind of evolved ape that still thinks digital watches are a pretty neat idea.”

Writing in 1980, Adams lampooned the then-current trend to see digital watches as better than the old-fashioned variety, even though they did the exact same thing.

Arguably, it’s only in the last five years that digital watches have experienced a rebirth by adding new functions, including payments and health monitoring, exercise tracking and the rest. You might find it useful to remember digital watches in the 80’s and today when thinking about the metaverse.

The “metaverse” concept has excited Mark Zuckerberg and colleagues so much they’ve changed Facebook’s name to reflect what they believe will be the future of commerce, social interaction and creativity.

This decision has absolutely nothing to do with their company being synonymous with corporate malfeasance and data misuse. Nothing at all. So let us move on.

Let’s start by defining the metaverse and what Zuck and Co see as the opportunity therein. To its proponents, the metaverse is also called Web 3.0 – the coming together of a wide range of elements and experiences which already exist.

Those pushing the metaverse see it as an evolution of the internet that includes virtual reality (think headsets in gaming), augmented reality (remember those google glasses?) and online interaction to create a new layer of reality and new experiences.

Tim Sweeney, Founder and CEO of Epic Games, has enthused that the metaverse will be “a massively participatory medium of a type we’ve not seen yet”, with a “fair economy in which all creators can participate, make money and be rewarded.”

“Film, music, software development and collaboration of all kinds are interesting possibilities for the metaverse.”

Some examples might help to explain this breathless enthusiasm. In gaming, the metaverse would enable a 24/7 active environment in which players could drop in and out of gameplay with others all over the world and switch between physical, digital and blended environments, all on a single platform.

Another entertainment example could include a virtual book group with enhanced content to enable readers to share their vision of an authors’ universe.

One of the more interesting possibilities of the metaverse would be the creation of video content produced, scripted, shot, edited, and viewed virtually. The same with music – imagine creating, mixing and playing live in an online environment.

When it comes to software and apps, it’s also easy to see the potential for developers to collaborate online, then sell their creations – all in the metaverse. 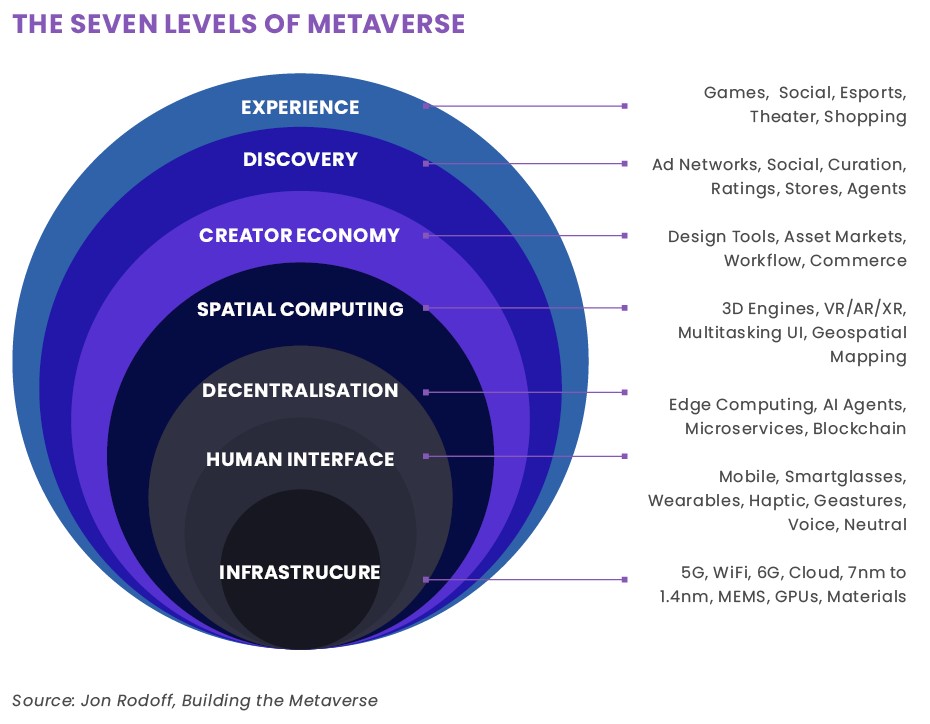 Thus explained, it’s easy to see the excitement among internet pioneers and investors for the metaverse. Especially since those huge, seemingly intractable problems associated with the internet today – security, identity and confidence in information sources – could be resolved by having ID confirmed through many different factors.

As always, though, there are objections. In fact, several.

To start with, some in the gaming industry say games already enact the metaverse promise: as things stand, it’s possible to play against other gamers anywhere in the world, 24/7, and pay – perhaps not with fantastic security, but still – for objects in-game.

Likewise, the software development business has tools such as github that allow for the real-time collaborative creation of new code. And creators of all kinds have platforms from substack to basecamp that enable them to monetize their creations.

Those pushing the metaverse might point to cross-border collaborations between scientists and doctors in areas such as cancer surgery, where the capacity to seek second opinions and real-time advice on tumour removal via 3D imaging already exists.

Why not make this a wider, more easily-accessible practice using a single global platform? To which the easy answer is that if those who use these tools already have what they need, why bother?

To return to the example of digital watches, it would seem that, as a species, we are not always willing to do something just because it can be done.

While various forms of heart rate monitor and fitness tracker have been available for 15-20 years, it wasn’t until such trackers were combined with geolocation technologies and time-keeping that their popularity really took off – and it needed a major global brand such as Apple to make it happen.

“People’s awareness that they and their data are the product is rising sharply.”

It’s not clear that Facebook can effect a similar transition from its platform into the metaverse – or that people will necessarily want to merge all of their online activity into a single platform.

At the time of writing, Facebook’s usage statistics have been haemorrhaging, and the company’s stock stands at less than a third of its value just six months ago, battered by accusations of data mishandling and privacy violations.

Put simply, people’s desire for online privacy, and their awareness that they and their data are now the product, is rising quickly. It is by no means certain that Facebook – or any other company – can easily overcome this problem.

Such public suspicion is exemplified in new research from Transact Payments Limited which reveals almost 7 in 10 people in the UK would not make a payment in the metaverse.

Another very difficult challenge in developing the metaverse is growing merchant awareness of the high margins charged by marketplaces like amazon.

Amazon’s share price has dropped by 35 percent since its mid-2021 high as the trend towards seeking better deals from independent specialist merchants grows.

At the same time, larger producers are getting better at offering deals and sales to drive traffic away from marketplaces and on to their own sites.

In book retailing, amazon’s margins can often represent 40 percent of cover price – easily as much as most bookshops charge publishers.

Publishers have woken up to the need to raise their game online – and that marketplaces aren’t necessarily the best solution for them. 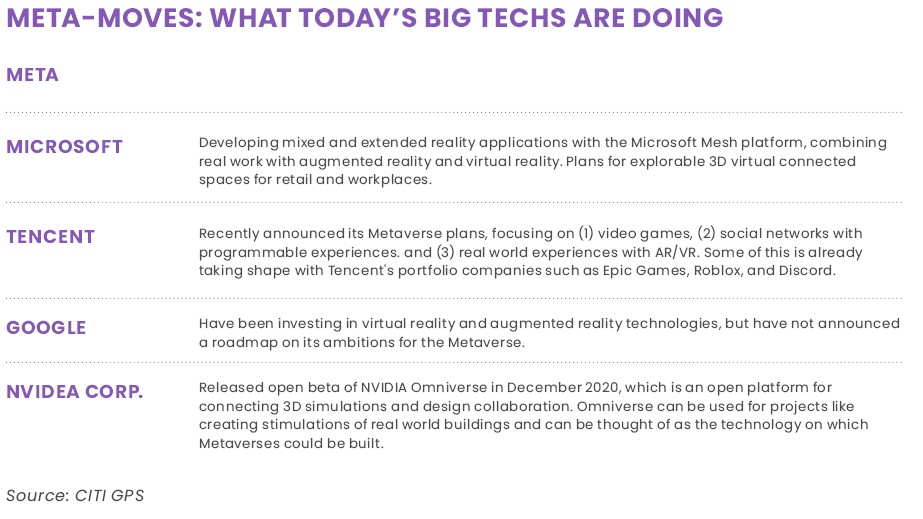 A new study from Citi GPS posits the metaverse as a “$8 trillion to $13 trillion economic opportunity”, citing revenue streams from online advertising, payments, smart manufacturing, education and other sources.

However, as Citi’s study also acknowledges, “the content streaming environment of the Metaverse will likely require a computational efficiency improvement of over 1,000x today’s levels.

Investment will be needed in areas such as processing, data storage, network infrastructure, consumer hardware, and game development platforms.”

Using the famous (and now largely described as irrelevant) law developed by computer scientist Gordon Moore in 1965 that processing power doubles every two years, this implies the metaverse may not be able to deliver on its promise for another twenty years.

That said, some elements could be realised earlier, such as collaborative environments. However, given that such environments already exist, why are consumers going to bother with a half-baked metaverse?

“Carpet-bombed by fraud attempts and fake identities, it’s no surprise to learn merchants and banks like the metaverse narrative of instant settlement and low-to-zero fees.”

Payments might provide part of the answer. Payment industry professionals feel the challenges of online payment every day: carpet-bombed by fraud attacks, margins eroded by high fees and challenges with delivery and fulfilment.

In such circumstances, it’s no surprise to hear that banks and merchants are keen on an environment that promises low to zero fees, instant fund transfers and fulfilment either online, or via local logistics partners through the metaverse.

It argues that fiat currencies themselves, in the form of tokenised credit and debit cards or digital wallets, are likely to have a lesser role and says that payment will be realised using blockchain-enabled rails, making the exchange of value faster and cheaper for transacting parties.

Finally, Citi say there will also be a big role for Non-Fungible Tokens (NFTs). As explained recently in PCM, NFTs enable creators to attach ownership and value to a digital object, meaning that everything from works of art to software could become tradeable online commodities.

“The full potential of NFTs and decentralised finance could be realised in the metaverse.”

A final advantage of the metaverse when it comes to payments is the possibility that banking moves from so-called “web 2.0” (online, accessed via user password and other factors) to web 3.0, in which users are able to access their accounts through continuous authentication via device/laptop and other factors native to the metaverse, such as iris recognition through a VR headset.

In this scenario, payments become faster and easier at the same time as other aspects of finance – such as mortgages, investment and insurance – are also managed easily between platforms in the “meta” environment.

For all that the metaverse promises greater ease and fluidity, we are some way away from being able to realise its full promise from a technological point of view.

What’s more, the technology challenge doesn’t begin to delve into the massive regulatory, security and legal challenges of a fully virtual life.

In February 2022 – to cite one recent, and deeply unpleasant, example – the BBC reported the results of an investigation that found young females’ avatars had been sexually aggressed in virtual reality environments, with another study describing the metaverse as a “breeding ground” for grooming vulnerable children.

All told, the metaverse in its current state is more embryo than newborn, and there’s no doubt it will take years, possibly decades, before it reaches anything like its final state.

Investors and corporates should be wary of moving too fast, mindful of the fate of early streaming companies that saw the potential of the internet for streaming before the technology could cope.

As for the rest of us, we might do well to remember the choice of the central character in Aldous Huxley’s Brave New World, who opts for a brief, painful and difficult natural life rather than endure the torment of being controlled by an all-knowing, all-powerful state.

The post Long Read: The Metaverse – Is it a fad or the future? appeared first on Payments Cards & Mobile.