Global smartphone shipments rose 11.6% year-on-year in the second quarter to 337.2 million, according to market researcher IDC.

This is the second highest quarterly total on record, with growth sustained after a strong Q1 by robust demand in many emerging markets. IDC said more affordable smartphones, often from local vendors, were driving the growth in the market, rather than the premium smartphones from the likes of Samsung and Apple. 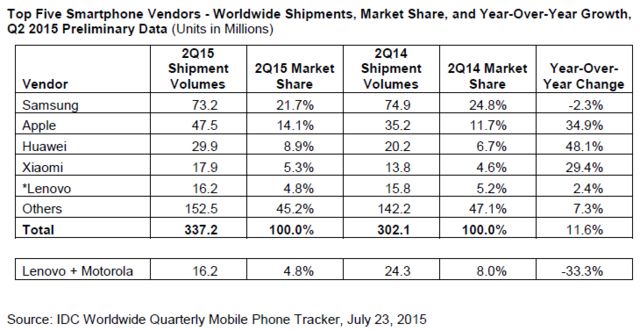 The market researcher noted as well that new vendors are joining the market every quarter in order  to capitalise on the local demand, with IDC now tracking over 200 smartphone brands in its reports. The shift to low-cost smartphones was underlined by the contraction in the feature phone market, with total mobile phone shipments down by 0.4% in the second quarter to 464.6 million units.

The top five vendors included three from China: Huawei in third place with an 8.9% share of the global smartphone market, up from 6.7% a year ago; Xiaomi with a 5.3% share or 17.3 million phones sold; and Lenovo, with a 4.8% share, down from 8.0% year ago pro forma for its takeover of Motorola.