Shipments totalled 354.8 million units in the third quarter of 2018, declining by 3.3% from the previous year. Second quarter 2018 smartphone shipments declined by 2.1%. The cumulative unit-shipment volume of global smartphones during the first three quarters of 2018 exceeded 1 billion units, which is down 1% down from the same period last year.

Samsung Electronics continued to lead the market in the third quarter, shipping 70.9 million units. Due to severe competition with Chinese rivals in many regions, Samsung’s year-over-year shipment growth rate has been negative since the fourth quarter of 2017, which caused the company’s market share to fall to 20%. 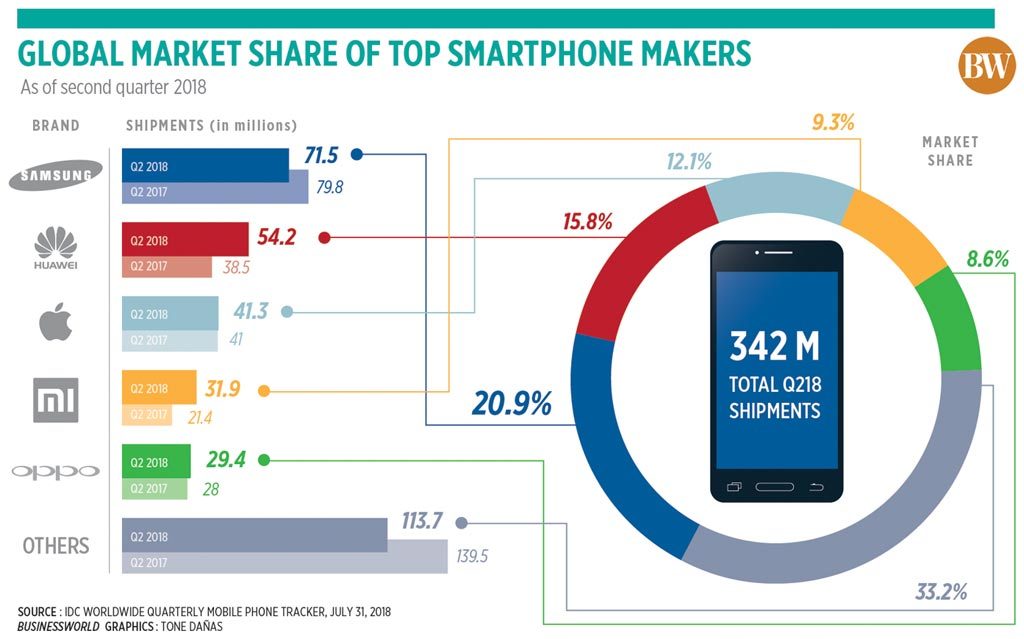 Samsung has ceded a lot of volume in China, the home country of Huawei, Oppo, Vivo and Xiaomi. Competitive pricing from these four Chinese manufacturers has improved brand awareness, and in some countries, including Italy, Greece and India, Huawei and Xiaomi have already become the biggest players.

Huawei, which beat Apple unit shipments for the first time in the second quarter, retained its second-ranked position in the global smartphone market in the third quarter. Huawei shipments grew 33%, reaching 52 million units. Huawei shipments are growing in most regions, except North America, with especially strong growth posted in Europe, the Middle East and Africa.

For the past two years, Huawei has been focusing on aggressively expanding its multi-camera feature across its smartphone lineup. Three-quarters of Huawei smartphones shipped in the second quarter featured double or triple cameras, which is much higher than Apple (43%) and Samsung (13%). The company also has a strong mobile-network business, which bolsters sales of smartphones through operators, especially in Europe, where operators play a strong role in smartphone distribution.

Apple iPhone unit shipments increased 0.5% to 46.9 million units, while revenue increased 29%, in the third quarter, indicating that the latest iPhone models convinced customers to upgrade, even at a higher price. Apple’s latest smartphone launches occurred in the third quarter; however, the iPhone XR, which is an entry model among the new models, was not available until the fourth quarter. As these new models start shipping in the fourth quarter – the biggest sales season for Apple – the company is likely to regain the second-ranked position from Huawei.

The first POCO-branded smartphone F1, equipped Qualcomm’s premium snapdragon 845 chipset and other high-end features at a price of around $285 – about half the price of similar-grade smartphones offered by its competitors. While Oppo shipments declined to 31.2 million units in the third quarter, Vivo increased its shipments by 13.6% over the previous year, reaching 28.9 million units.

The combined smartphone shipments of the four leading Chinese manufacturers – Huawei, Oppo, Vivo and Xiaomi – reached 144.5 million units, which accounts for 41% of the global smartphone market. The strong performance and huge shipment volumes of these four companies has made it harder for smaller-scale manufacturers to compete. In fact, shipments from manufacturers ranked seventh and below are declining every year.

The growth engine of the four Chinese manufacturers is their speed to market, which means they can address customer needs and market trends more quickly, spreading new features to their mid-level and low-end smartphones.