The global smart card market is expected to exceed $65 billion by 2025. The rise in privacy and data security concerns in financial transactions will drive the industry growth over the forecasted timespan as well as banks and financial institutions exposure to cyber-attacks and data security breaches, according to Global Market Insights. 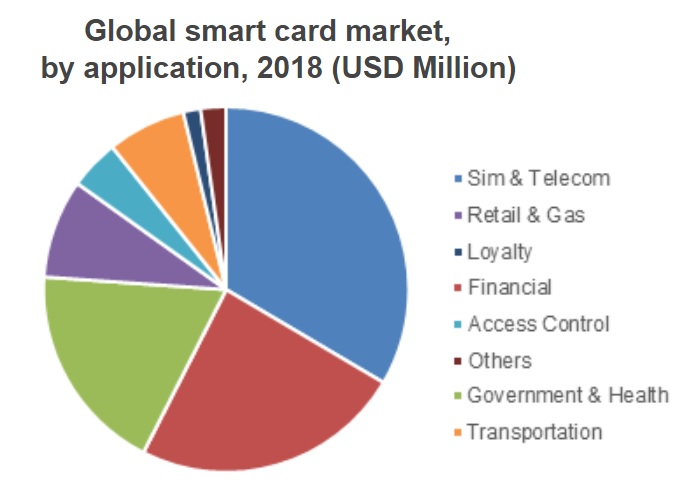 The increasing number of cashless transactions in emerging economies will positively impact growth in the smart card market. According to Credit Suisse Group digital transactions in India are estimated to reach $1 trillion by 2023. The increased adoption of smartphones coupled with government initiatives is encouraging several economies to adopt digital and smart card payments.

In 2018, the microprocessor smart card market accounted for the majority of the industry share. These cards include a small microchip that processes and stores electronic data while securing data, assets, and identity. They are widely adopted in the banking and telecommunication sector for data transaction. In addition, these cards are being implemented in solutions, such as Public Key Infrastructure (PKI), access control, e-passport, and multi-application cards, to address the issues of security through their cryptographic capabilities.

The government sector is increasingly implementing smart cards for enhancing interaction with the citizens. These cards help ensure access to services entitled to citizens and improve service delivery. Government administrations of countries including China, the UK, Singapore, France, the US, and India are increasingly adopting the cards for various applications such as health cards, ID cards, driving license, and e-passport. For instance, Singapore is using EZ-Link contactless smart card for public transport applications and as a payment option for buying foods & drinks from stores.

The Asia Pacific smart card market will witness high growth over the forecast timeline owing to the increasing demand in developing countries such as India, China, and Thailand, promoting the adoption of smart cards in transportation, retail, government, and BFSI healthcare sectors. Furthermore, the favourable regulatory environment regarding cashless economies is promoting the usage of digital and smart card payments.

For instance, Reserve Bank of India (RBI) has mandated central banking institution to issue smart debit cards replacing magnetic strip cards. Several countries are implementing smart cards to make the process of payments and documentation easy for consumers. Moreover, with the rise in the number of subway trains in China, the market for smart cards is expected to grow significantly.