According to a new report, global investments in FinTech has  fallen by 29% in H1 2019 as deal activity in China in particular fell sharply amid an escalating trade war between Washington and Beijing.

The report, by the consulting firm Accenture using data from CB Insights, notes the value of financial technology deals worldwide in the six months ended June 30 declined to $22 billion, compared with $31.2 billion in the same period a year earlier. The number of deals globally, in contrast, increased 2% to 1,561 in the first half of the year.

Ant Financial Services, the operator of Alipay, raised $14 billion in H1 2018, the largest FinTech investment last year. Excluding that deal, global FinTech investments would have increased 28% in H1 2019, according to Accenture.

The United States remained the biggest market for  FinTech transactions, with investments jumping 60% to $12.7 billion in H1 2019, according to Accenture. Investment in the United Kingdom nearly doubled to $2.6 billion, while Germany, Sweden and France also saw strong gains. 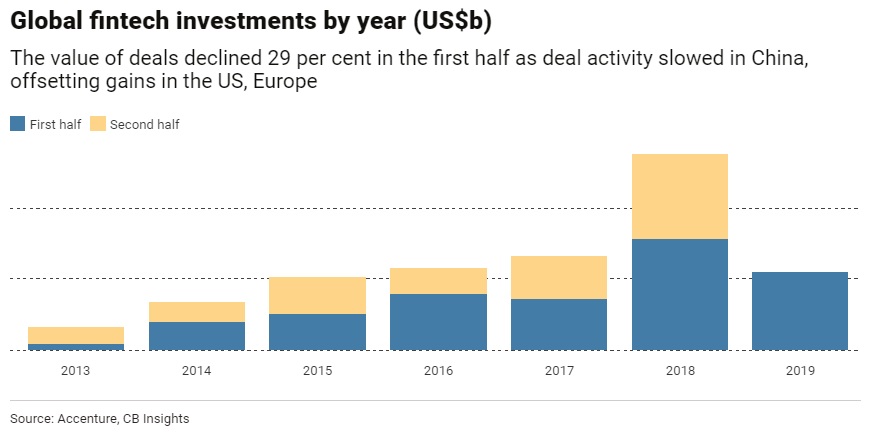 “There’s been a lot of interest and demand from consumers for new FinTech propositions, particularly in the UK and elsewhere in Europe. Fundraising is also moving to support the scaling up of challenger and collaborative FinTech, which will cause lumpiness in some [funding] rounds,” said Julian Skan, a senior managing director in Accenture’s Financial Services practise. “However, the question is: How long can that last? Fundraising is likely to reach a plateau soon and will most likely dip going forward.”

In China, the number of FinTech investments fell by nearly half to 79 transactions, compared with 155 FinTech deals in China the first half of 2018, Accenture said. China was a major driver of FinTech funding globally in 2018. The overall amount of FinTech investments in China was $820 million in H1 2019, compared with $17.7 billion in H1 2018. Excluding the Ant Financial transaction, fundraising in China still fell 79% in the first half.

The decline in Chinese FinTech investments came as tensions intensified between the US and China over trade and technology in a trade war that has raged for more than a year. The US has increased scrutiny of foreign investments in the US, including by Chinese firms, and placed restrictions on some Chinese firms to be able to access US technology, including blacklisting Chinese telecommunications company Huawei Technologies.

Fears also are growing about a potential global recession as the trade dispute has weighed on future business investment. US markets posted some of their biggest declines of the year on this week, following signs of a slowdown in Germany and weak economic data out of China.

Globally venture capital investments were down 19% to $100.6 billion, according to Refinitiv. The largest FinTech deals in China this year included $145 million raised by online insurance platform Shuidihuzhu in June, a $100 million fundraising by risk management firm Tongdun Technology in April and a $94 million Series A round by start-up Wiseco Technology in May, according to Accenture.

FinTech investments in Singapore nearly quadrupled to $453 million in the first half of the year, making it the third biggest FinTech market in the Asia-Pacific region, behind China and India. Investments in Indian FinTech companies declined 25% to $811 million in the six months ended June 30.

Hong Kong also benefited from new FinTech investments as the city’s first virtual banks are expected to debut later this year. Fundraising by Hong Kong FinTech companies rose to $152 million in H1 2019, compared with $23 million a year ago. The number of transactions doubled to 12 from six in H1 2018.

In Southeast Asia, Vietnam had its largest FinTech deal ever in the first half as e-wallet company MoMo raised $100 million in January. In Indonesia, investments increased to $65 million, compared with $13 million in the prior year period.