For the Global Financial Centres Index (GFCI), London remains just ahead of New York to retain the number one position.

Both cities gained four points in the ratings and London remains eight points ahead of New York. The GFCI is 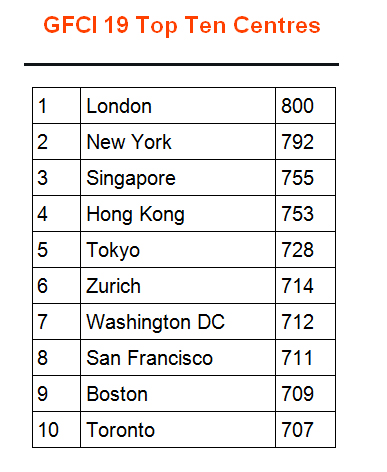 on a scale of 1,000 points and a lead of eight is fairly insignificant. We continue to believe that the two centres are complimentary rather than purely competitive. A number of respondents to our questionnaire have commented that the uncertainty surrounding the possible exit of the UK from the EU is having a negative impact on London’s competitiveness at present.

London, New York, Singapore and Hong Kong remain the four leading global financial centres. Singapore has overtaken Hong Kong to become the third ranked centre by just two points. Tokyo, in fifth place, is 72 points behind London. The top financial centres of the world are all well developed, sophisticated and cosmopolitan cities in their own right. Successful people are attracted to successful cities and it is perhaps no surprise that these centres are ranked so high by financial services professionals.

Western European centres remain mired in uncertainty. The leading centres in Europe are London, Zurich, Geneva, Luxembourg and Frankfurt. Of the 29 centres in this region, 12 centres rose in the ratings and 17 centres fell. Rome, Madrid and Brussels, three centres closely associated with the Eurozone crisis have shown signs of recovery.

Seven of the top ten Asia/Pacific centres see a fall in their ratings. Singapore, Tokyo and Beijing rose slightly in GFCI 19. Of the top ten centres in this region, Seoul and Sydney showed the largest falls.

Centres in the Middle East and Africa also fell in GFCI 19. Having made gains in GFCI 18 all centres in this region, except Casablanca, fell in the ratings. Dubai remains the leading centre in the region, followed by Tel Aviv and Abu Dhabi. Casablanca rose 11 places and is now fourth in the region.

Latin America and the Caribbean suffer. All centres in this region, with the single exception of Mexico City fall sharply in GFCI 19. The offshore centres in the Caribbean (in common with the British Crown Dependencies listed under Western Europe) all suffered declines along with the Brazilian centres Sao Paulo and Rio de Janeiro.

“Whilst London and New York still lead the field, the next three centres are all Asian. Five of the top ten centres are now North American perhaps reflecting the surge in Fintech and blockchains,” notes Mark Yeandle, Associate Director at the Z/Yen Group and the author of the GFCI.