The late Apple co-founder and long-time CEO Steve Jobs famously believed that, when it came to product design, less was more, and of course his creations delighted consumers all over the world. But even though this has been a winning theory in design, when it comes to the proliferation of technology, today’s consumers generally seem to want more, more, more.

With voice assistants, for example, homes and cars have become digital, too. So before we delve into Return on Experience (ROX) and how you can measure and improve it, let’s take an overall look at PwC’s latest GCIS results to better understand what sort of experiences consumers are now demanding.

The Global Consumer Insights Survey 2019 findings attest to the steady encroachment of digital technologies into every corner of consumers’ lives. For example, the percentage of respondents who buy something online weekly or more frequently rose five percentage points year-over-year, to 31%, and the share of consumers who never shop online fell by three percentage points (see Figure below).

The findings also confirm that smartphones have become the go-to technology for online shopping, with 24% of the global sample using a mobile phone to shop at least weekly, compared with 23% using a PC and 16% using a tablet (see Figure below).

This is the first year in the decade that PwC has been conducting the study that mobile phones were used more than other digital devices. As consumers become more familiar with and trusting of digital technology, they are going online for other services, too. 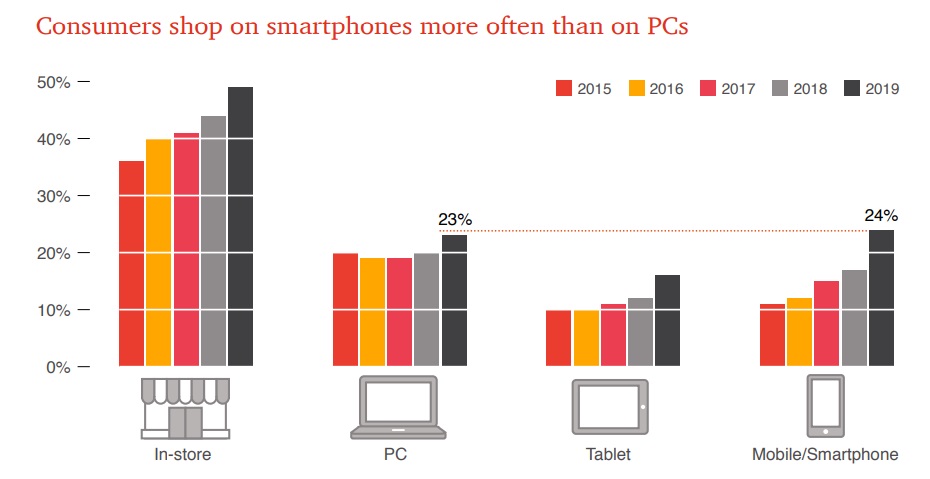 More than half (51%) of the survey respondents paid bills and invoices online in 2018, and the same percentage transferred money online.

Cord-cutting is increasingly popular, too, with 54% of those surveyed streaming movies and TV two times a week or more. Generation Z leads this trend. More than 50% said they stream entertainment once a day or more frequently.

Mobile payment services also are gaining widespread acceptance, especially in emerging regions that have leapfrogged past landline-based telephone systems and gone straight to mobile and smartphones. The number of people making mobile payments in stores is growing fastest in Vietnam, where our survey showed that the percentage of consumers using such services in-store increased by 24 percentage points, to 61%, in a single year.

In the Middle East, the percentage grew by 20 percentage points, to 45% (see Figure below). Globally, 34% of consumers paid for purchases using mobile payment in-store, up from 24% a year earlier. 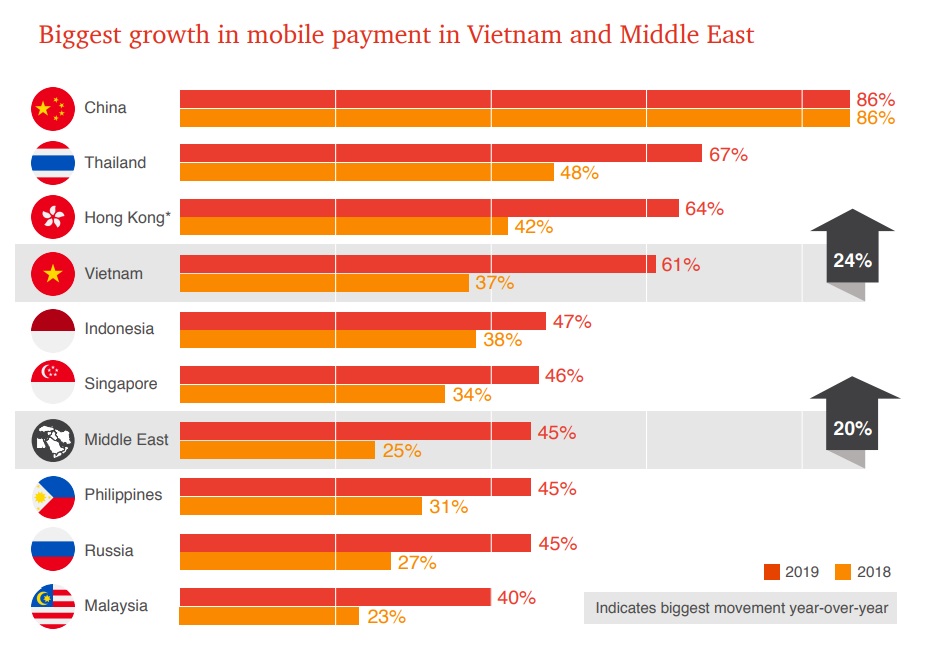 The survey also suggests that the less friction in the purchase journey, the more often consumers will shop and the more they’ll spend. For instance, 65% of the global sample does at least some shopping with Amazon. But what’s really interesting is that of those individuals, more than one-third (34%) said they shop more frequently because they use Amazon, which to PwC suggests that there must be something about the experience that encourages shopping.

And crucially, YNAP’s own research shows that its mobile customers buy much more frequently than its desktop customers and spend significantly more per year. It’s no coincidence, according to Enrico Cavatorta, who served as YNAP’s chief financial officer through January 2019.

“By enhancing the customer experience at the layer that allows interactions with consumers — the web store, the mobile interface — YNAP finds that customers spend more time and money shopping with them,” Cavatorta said in a January 2019 interview.

Digital voice assistants powered by artificial intelligence (AI) also contribute to a frictionless purchase journey. In our survey, 9% of consumers told us they use voice technology to shop online weekly or more frequently.

As shopping by voice continues to catch on, companies should be thinking beyond mobile to consider how voice technology in homes, cars and elsewhere will affect customer experience. The bar for brand leadership will continue to shift as organisations launch increasingly consumer-friendly technologies.