New research indicates that the number of ATMs installed worldwide fell by 1% in 2018, to stand at 3.24 million, impacted by branch closures and the rising popularity of mobile payments. 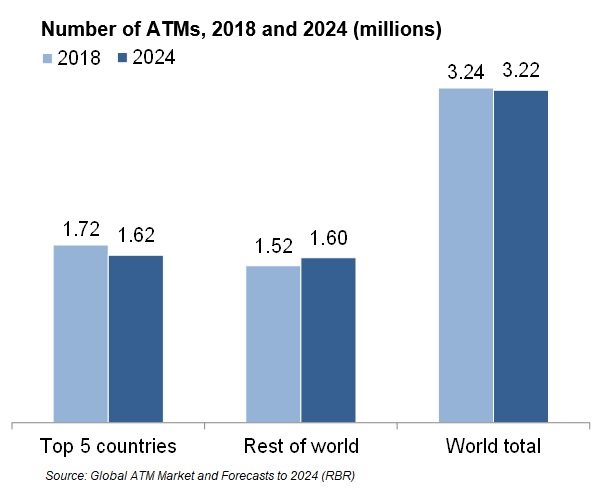 According to the report from RBR, ATM numbers dropped in four of the five largest markets in 2018. More than half the world’s ATMs are found in just five countries; of these China, USA, Japan and Brazil saw a decrease in ATMs, whilst in India, growth slowed considerably.

While the outcome was the same, each of these markets had its own reasons for the removal of ATMs. In China, the swift adoption of non-cash payments has contributed to a similarly rapid fall in ATM installations.

Branch closures have led to fewer bank ATMs in the US, while IAD expansion was stifled as some retailers chose to withdraw machines rather than upgrade to EMV standards.

The Japanese market shrank for the first time since 2009, as banks attempt to improve operational efficiency via increased ATM sharing.

This is reminiscent of Brazil in recent years, although in 2018, the removal of around 1,200 terminals in Brazil was primarily due to banks reacting to a surge in the use of digital channels.

Growth in developing markets will soften the global ATM decline

Despite these findings, RBR’s study shows that ATM numbers have actually grown in most countries; in particular financial inclusion initiatives continue to bolster ATM growth in developing markets across Asia-Pacific, the Middle East and Africa and Latin America.

With this pattern expected to continue over the next few years, the global ATM total is set to fall slowly, to 3.22 million in 2024.