In 2017, as the ATM industry celebrated its 50th year, the number of ATMs installed worldwide peaked at 3.28 million with a fall in installations predicted over the next few years.

According to Global ATM Market and Forecasts to 2023, the number of ATMs installed worldwide is set to drop off gradually to 3.23 million by the end of 2023. 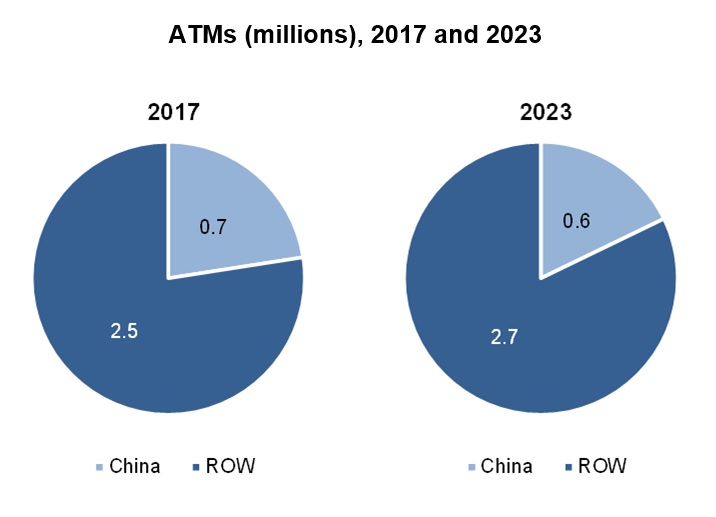 The global figure is, however, skewed by China, and ATM markets in the majority of countries will still expand. In fact, if China is excluded, the number of ATMs in the rest of the world is projected to grow, with the total across all other countries rising from 2.5 million to 2.7 million.

China is by far the largest ATM market and home to almost a quarter of the world’s ATMs. After years of explosive growth, the ATM sector in the country went abruptly into reverse in 2017, with deployers withdrawing 20,000 ATMs.

China’s burgeoning middle class has embraced digital payments enthusiastically, and as demand for cash falls, the number of ATMs in the country is expected to continue dropping.

The move away from cash, while perhaps most starkly exemplified by China and the rise of mobile payment app giants, will also contribute to falling ATM numbers in several western European countries, although here it is payment cards and bank branch closures which explain the decline.

Nevertheless, cash usage remains strong in many parts of the world, and this will be an important driver of growth in many other Asian markets, the Middle East and Africa, and Latin America. Bangladeshi deployers, for example, are projected to increase their country’s ATM total by over 60% by the end of 2023, as the government pushes for greater financial inclusion and banks expand into more rural areas.

“Convenient access to cash remains a priority for a great many customers around the world, and ATMs will continue to be a key cash delivery channel in the years to come,” comments Rowan Berridge, Report Author, RBR.