Asia-Pacific is home to almost half of the world’s ATMs, and within this vast region, some countries continue to witness impressive growth, whilst others have started to shrink.

Having grown exponentially for a number of years, the Global ATM Market and Forecast to 2024 reveals that the number of ATMs in China shrank for the second year running in 2018, with the removal of 50,000 machines. While China’s decline is by far the most dramatic, it is not the only market contracting in Asia-Pacific.

The region’s three oldest markets – Japan, Australia and South Korea – were among the earliest ATM adopters in the world, first installing ATMs between the late 1960s and mid-1970s. They have also often been at the forefront of innovation, with the world’s first automated deposit ATM deployed in Japan as far back as 1982. In all three countries, however, the number of ATMs fell in 2018 as banks rationalised their estates in response to cost pressures and diminishing demand for cash. 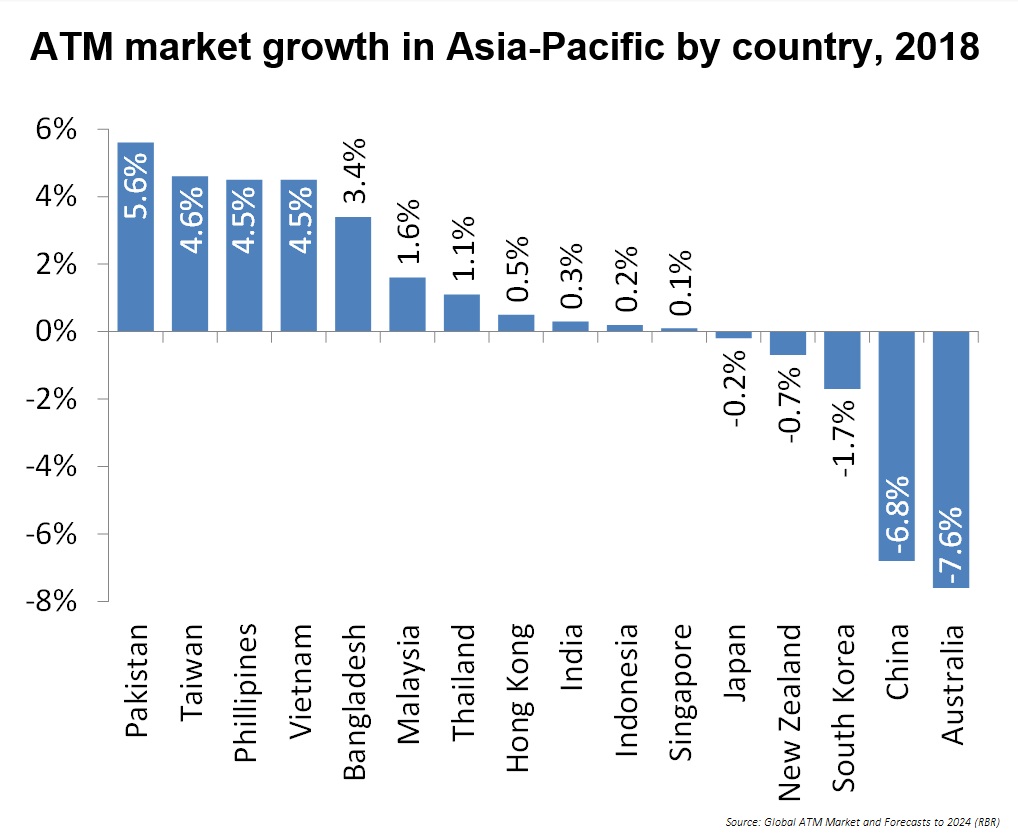 ATM numbers continue to rise in the majority of countries

Elsewhere in Asia-Pacific, strong year-on-year growth continues, often resulting from government-backed financial inclusion initiatives. The majority of markets saw ATM numbers rise in 2018, and despite the falls highlighted above, the overall decline in the region was relatively small.

In Bangladesh, where ATM deployment did not begin until 2002, the market continues to be driven by new installations in rural areas aimed at newly-banked segments of the population. Vietnam, the region’s second youngest market, has seen large increases for a number of years thanks to financial inclusion initiatives and increased bank deployment. Meanwhile, expansion in Pakistan resulted from regulations that require all bank branches to be equipped with an ATM, as part of wider efforts to expand access to banking services in the country.

“While headlines naturally focus on the declines seen in markets such as China, it is important to note that many countries in Asia-Pacific are still experiencing rapid growth in ATM numbers, bringing banking services to the previously underbanked, particularly in rural areas of developing markets,” says Rowan Berridge, who led RBR’s Global ATM Market and Forecasts to 2024. “This region is home to many innovative ATM industry players, and it will be interesting to watch it continue to develop in the coming years.”